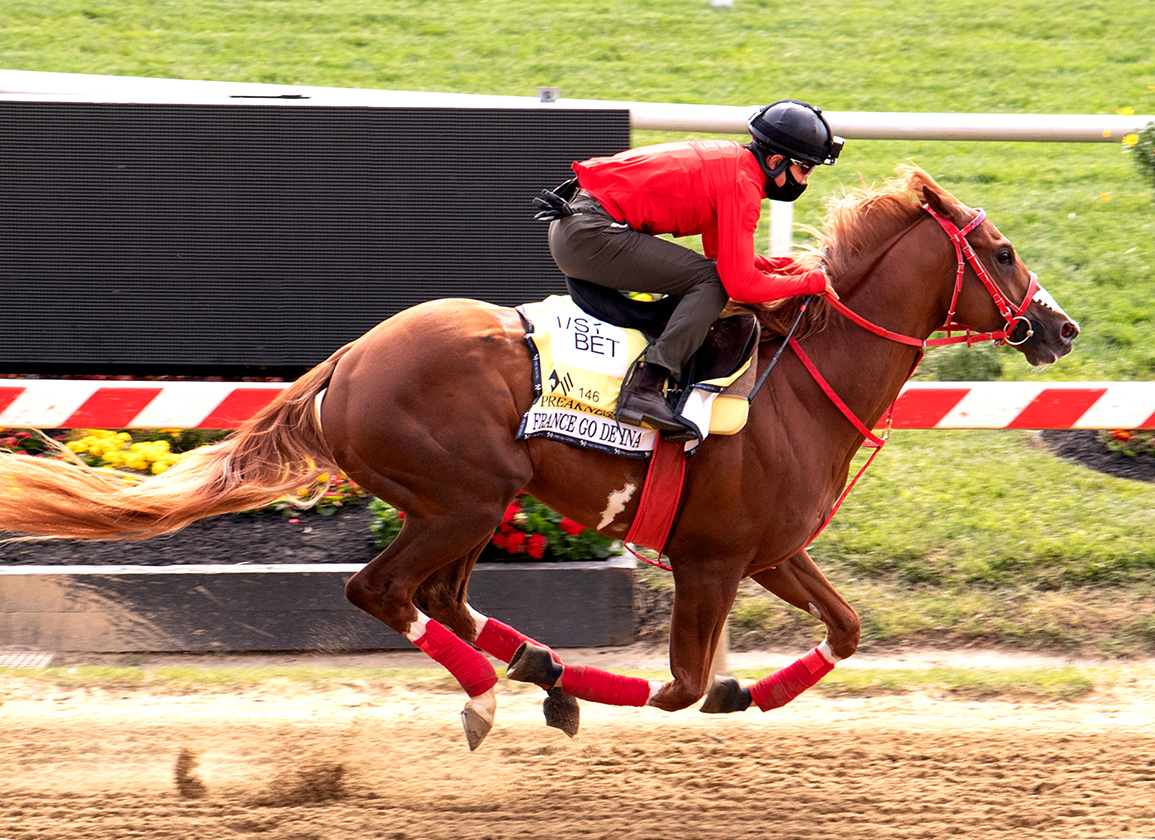 Yuji Inaida's France Go de Ina (Will Take Charge) visited Belmont's main track for the first time Friday to begin preparations for a start in the June 5 GI Belmont S. Trained by Hideyuki Mori said the Kentucky-bred was settling in well to his new surroundings after arriving at Belmont last Monday following his seventh-place finish in the GI Preakness S.

“It's been 15 years since I've been here,” said the 62-year-old with a laugh Saturday morning on the Belmont backstretch via translator Kate Hunter.  “I forgot how big it was. It looks like he has settled in well and is in very good condition. He looks like he has got all his weight back from after the race and all the travel.”

Japanese-based France Go de Ina was purchased by the conditioner for $100,000 at the 2019 Keeneland September Yearling Sale for owner Yuji Inaida.

In addition to trying to collect a $1 million bonus offered to the connections of any Japan-based horse who wins the Belmont, France Go de Ina will look to provide Mori with his first win in North America with his eighth starter.

Mori brought Ski Captain to Churchill Downs in 1995 to finish 14th in the GI Kentucky Derby in his first venture to North America.

The 3-year-old is a two-time winner at Hanshin, including a maiden score Nov. 28 and an allowance win Dec. 19. He entered the Preakness off a sixth in the UAE Derby.

Mori expects France Go de Ina to improve off his latest effort following extensive travel to Baltimore for the 1 3/16-mile second jewel of the Triple Crown.

“He was good at the beginning, but he seemed to get a little tired at the end,” said Mori. “He went from Dubai to Japan and then Japan to the Preakness and he probably needed the race to be more fit for the Belmont.”

Mori said France Go de Ina is bred to enjoy the stretch out in distance to 12 furlongs.

“He's out of a Curlin mare, so we're hopeful he'll be able to stay the distance,” said Mori. “He will probably have a serious work on Tuesday or Wednesday before the race. He'll canter in the mornings and continue to build stamina.”