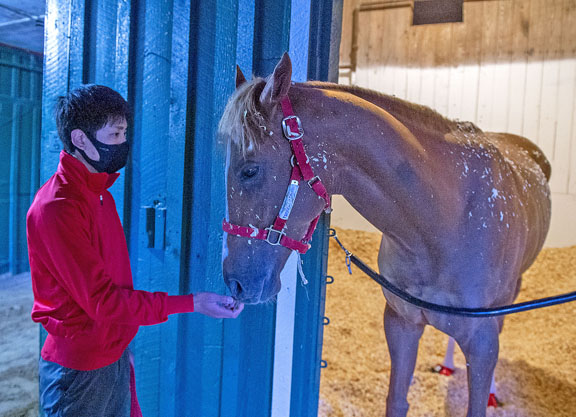 Japan-based GI Preakness S. contender France Go de Ina (Will Take Charge) arrived at Pimlico Race Course Saturday night. The chestnut colt, trained by Hideyuki Mori, is set to become the first horse from Japan to compete in the Preakness since Lani in 2016 and the first Japanese horse to compete in a Triple Crown race since Master Fencer ran in the 2019 GI Belmont S. He arrived in California Wednesday to quarantine, left California Saturday afternoon and made a stop in Newark, N.J. before arriving in Baltimore and Pimlico at approximately 7:45 p.m.

France Go de Ina began his career in Toyko in November. After finishing fourth in his debut, he won two consecutive races at Hanshin Racecourse to end his 2-year-old season. In his only start this year, France Go de Ina was away awkwardly before finishing sixth in the G2 UAE Derby at Meydan.

According to Kate Hunter, Triple Crown representative for the Japan Racing Association, France Go de Ina is not expected to go to the track until Monday.

“He looked like he shipped very well. It was a long and bumpy road to get him from Japan, Dubai, Japan, Los Angeles, Newark to Pimlico, but he's in good shape,” Hunter said. “We'll know exactly how well we're going to do Saturday when he breezes on Wednesday.”