Fourth Time Lucky In the Sprint for Fan-Favorite Whitmore 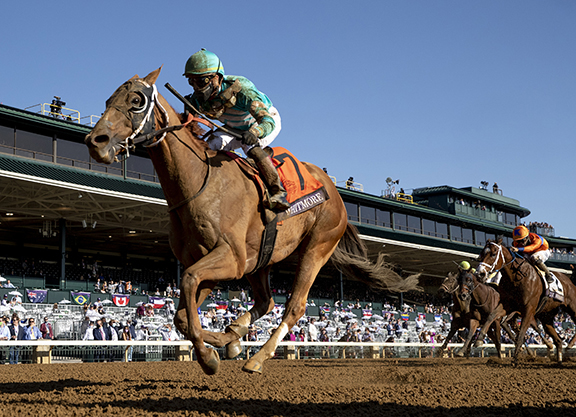 The $4.2-million earner lagged in the latter third of the field early as Japanese raider Jasper Prince (Violence) ensured a fast pace, chased along by fellow longshot Empire of Gold (Goldencents). Traveling nicely within himself on the turn, Whitmore crept into it while steadily gaining on the leaders, angled out into the three path entering the final furlong and outran C Z Rocket (City Zip) to the wire to take it by 3 1/4 lengths. Firenze Fire (Poseidon's Warrior) rallied up the inside to just touch Empire of Gold out of third.

Heavily favored sophomore Yaupon (Uncle Mo), unbeaten in four prior attempts racing on the engine, including Saratoga's GII Amsterdam S., tired to eighth after chasing the early leaders on the outside from third.

“I said in the pre-race interview that whenever there are this many track records, it's almost impossible to think a closer is going to do well,” winning trainer and co-owner Ron Moquett said after saddling his first Breeders' Cup winner. “For him to run against the bias the way he did and the patience of the rider [Irad Ortiz, Jr.], the willingness to listen, it all worked out. I'm so proud of the horse, proud for the connections. I'm proud for everyone out there that's thinking when you run last in the Kentucky Derby, kick them out, do right by the horse come back, and you have a shot to reach other dreams. You don't discard them. You just do right by the horse and it keeps working out.

Moquett continued, “I'm just grateful. Grateful for the horse. Grateful to everyone that sends me well wishes and congratulations after the race. Just grateful.”

Two years ago Moquett was diagnosed with autoimmune disease, which affects the lungs and can make breathing difficult. The disease forced him to avoid the racetrack for several months.

Whitmore, who gave Moquett his second career Grade I victory in the 2018 Forego at Saratoga, has helped the affable trainer get through his darkest days.

“Right after the race they come up and they want to do interviews, and for a little bit, for a guy that's lung compromised, I'm sitting over here trying to go, 'Okay, first you catch your breath and then you can talk and then when you put these, what I call life restrictors on me, then it makes it that much harder to get air through there,'” Moquett said.

“He's everything. You get a horse like this, and all horses, I mean, we drive across the country all the time just to see horses. But a horse like this that tries and fights and gives you everything consistently, you want to be there. I'm not saying that even in one of these big barns that he wouldn't have performed beautifully and done just as well, but I am saying that Whitmore in a big outfit may not have received the exact attention that he needed to get there. So, I use that as motivation. If I'm not there to do my job, who is going to do it?”

Whitmore, a Classics hopeful after finishing third in the GI Arkansas Derby in 2016, finished 19th in that year's GI Kentucky Derby.

Re-invented as a sprinter since, Whitmore finished eighth in the 2017 Breeders' Cup Sprint at Del Mar, second to Roy H (More Than Ready) at Churchill two years ago and third to Mitole (Eskendereya) last year at Santa Anita.

“It's just an incredible win,” said Kumin, also a co-owner of Friday's GI Breeders' Cup Juvenile Fillies Turf heroine Aunt Pearl (Ire) and Saturday's GI Breeders' Cup Distaff heroine Monomoy Girl (Tapizar). “You own lots of horses, but very rarely do you find one that is a fighter like this guy, with so much heart. All the credit goes to Ron and his team and Whitmore because he's just, you know, he's a warrior and it was just amazing to see today.”

Will we see the popular gelding back again at age eight?

The veteran Whitmore, who would undoubtedly win any popularity contests of the 2020 Breeders' Cup, is the most accomplished horse sired by 2003 GI Breeders' Cup Classic winner Pleasantly Perfect–although the latter also sired 2010 GI Breeders' Cup Filly & Mare Turf winner Shared Account, who in turn foaled 2019 GI Breeders Cup Juvenile Fillies Turf winner Sharing (Speightstown)–from his 20 black-type winners and seven graded winners. Pleasantly Perfect died in June in Turkey, where he had stood from 2015-2019. Whitmore is out of the Scat Daddy mare Melody's Spirit, who was unraced and produced Whitmore as her first foal. Her 2-year-old colt Skip Intro (Liam's Map) is a barnmate of Whitmore's in Ron Moquett's shedrow and was second in a Churchill maiden special weight Nov. 1. Melody's Spirit's yearling colt by Arrogate–named Arrogates Spirit–was a $170,000 RNA at Keeneland September. The mare has been bred back to Constitution. The late Scat Daddy's record as a sire has been well documented, but he also has nine black-type winners out of his daughters, led by Whitmore.