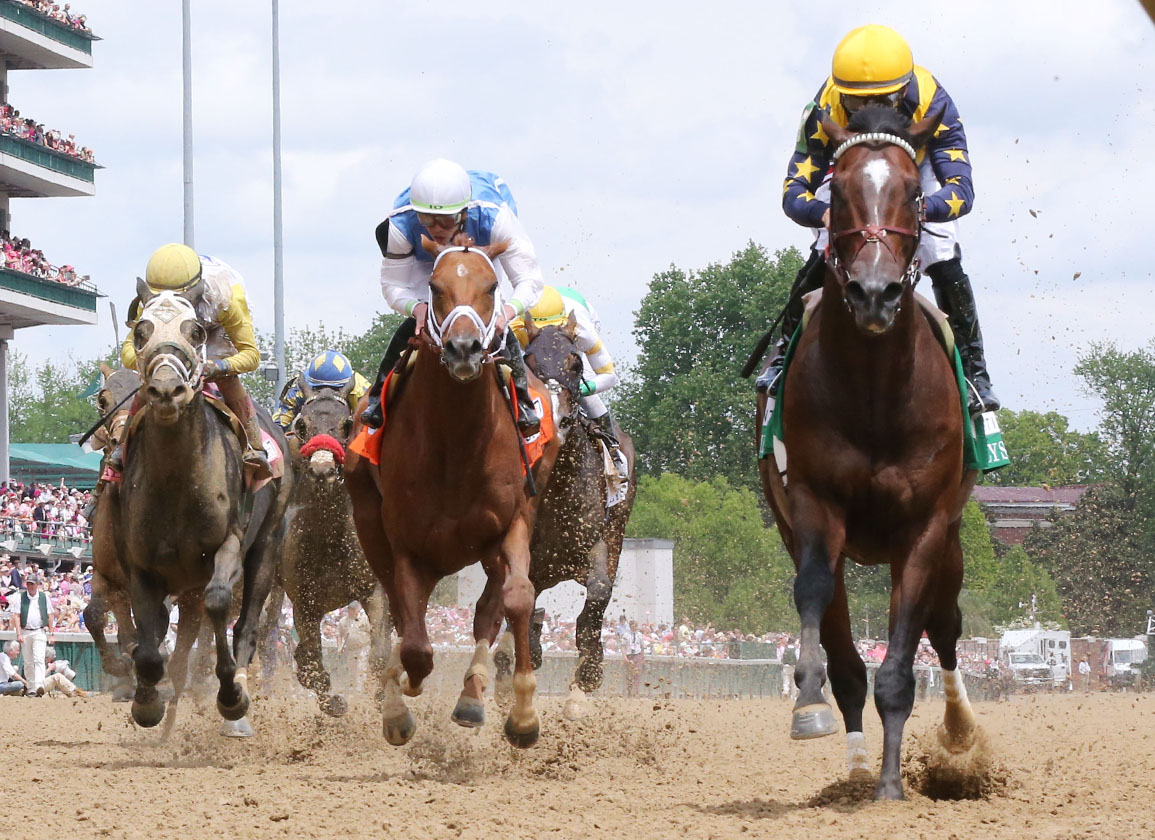 And the beat goes on for Olympiad (Speightstown), who looked to be in all sorts of trouble entering the final furlong of Friday's GII Alysheba S., but he called on his class and talent to repel a challenge from 'TDN Rising Star' Happy Saver (Super Saver) to remain perfect from four starts this season.

Away alertly, the odds-on favorite raced prominently under the wire for the first time and had company to his inside in the form of Weyburn (Pioneerof the Nile) and from a three-wide Happy Saver. The Chiefswood homebred Weyburn took the Alysheba along through a steady opening half-mile, but Olympiad was asked to creep closer by Junior Alvarado with three furlongs to race. Happy Saver had that move covered and, indeed, appeared to be going the better of the two as he turned into the stretch with a clear advantage. Olympiad braced for the fight and, once swapping over to his correct lead at about the eighth pole and despite being race-ridden by Irad Ortiz, Jr. aboard Happy Saver, found his second wind and proved a clear-cut winner in the finish. Title Ready (More Than Ready) rallied for third ahead of the hulking Weyburn, who looked to put a foot under the rail and bounced off the fence at the furlong grounds, albeit once a beaten horse.

A big-figure allowance winner at Keeneland last October, Olympiad was given a serious class test in the GI Cigar Mile H. Dec. 4 and did well to finish fourth. It's been nothing but blue skies since a stretch out to two turns this term, as the $700,000 Keeneland September buy thrashed Gulfstream allowance rivals by better than seven lengths Jan. 15 ahead of victories in the GIII Mineshaft S. Feb. 19 and Mar. 26 GII New Orleans Classic.

“It takes him awhile to get into his nice rhythm but then after that it's over,” Alvarado said. “Happy Saver was trying to do his job, riding tough on me trying not to give me much room for my horse to finish up his run. I knew there was a horse in there, but I tried to help a little bit, to keep my momentum going forward, but I like I said I wasn't doing anything, it was the horse on the outside putting the pressure on me.”

Tokyo Time is the dam of the maiden 3-year-old colt Friendship Road (Quality Road), a 2-year-old filly by War Front and a yearling colt by American Pharoah. She was most recently served by Quality Road.