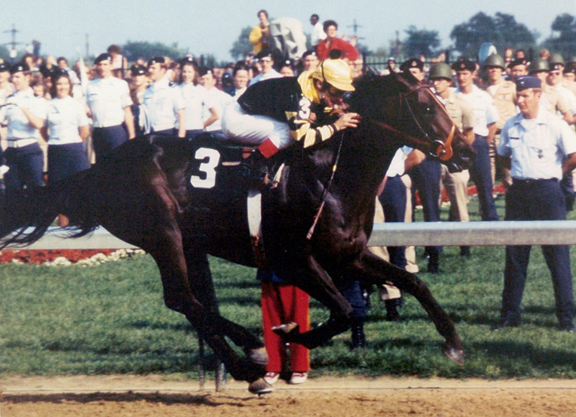 During Stone's tenure at the helm of Churchill, from 1970-84, the Louisville track witnessed a remarkable three Triple Crown winners in Secretariat, Seattle Slew, and Affirmed. As Churchill's ninth president, he was responsible for instituting the 20-horse limit in the Kentucky Derby and also oversaw $10-million in physical improvements that included new Skye Terraces, a press box, jockey quarters, 12 new barns, fire-resistant tack rooms, sprinkling systems in all barns, a recreation building, restroom facilities, and fireproof stairways in the grandstand and clubhouse.

Stone had originally joined the Louisville track in 1961 as resident manager and jointly spent several years as president of both Churchill and Florida's Hialeah Park. He also served two terms as president of the Thoroughbred Racing Association of North America and was on various boards, including the American Horse Council, Jockey Club Round Table, and Kentucky Thoroughbred Breeders' Association.

Born in New Orleans in 1925, Stone was a member of the U.S. Coast Guard during World War II. A career in professional baseball followed. He signed with the New York Yankees and played with other minor league teams, then moved into management. He was part of the 1958 move of the Milwaukee Braves Triple-A team to Louisville and served as general manager of the Louisville Colonels until Churchill beckoned.

After retiring, Stone continued as a consultant to Churchill and other racing and sports organizations. Survivors include his wife, Jane Stokes Stone; three sons: Michael Stone (Katharine Friel) of Versailles, Patrick (Nora) Stone of Lawrenceburg, and Steve (Leslie) Stone of Nicholasville; two step-children: Charles (Christine) Halloran of Washington, D.C. and Ann Tarter Halloran of Lexington; and numerous grandchildren, great-grandchildren, and one great-great-grandchild.