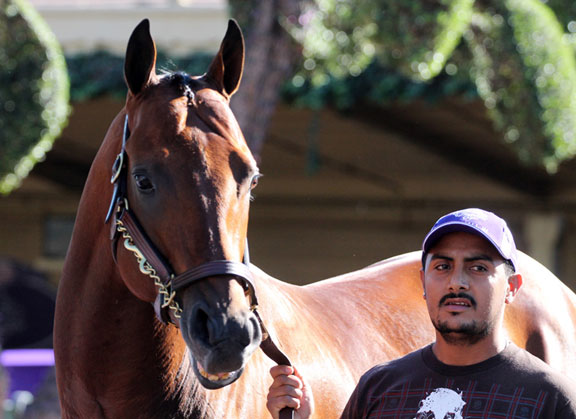 Chips All In (North Light {Ire}), a six-time stakes winner who competed in the 2013 GI Breeders' Cup Turf Sprint, was pulled up with an undisclosed injury and failed to finish as the 1-20 favorite in a $1,750 allowance race at Sandy Downs on the Idaho fairs circuit on Sept. 30.

The injury comes just three weeks after TDN published a column that detailed the precipitous drop in class for the former southern California-based graded stakes competitor. Chips All In had been racing at Del Mar Thoroughbred Club as recently as Aug. 24, but resurfaced in the entries for the Eastern Idaho State Fair at Blackfoot and earned $990 for winning an allowance there Sept. 3.

That TDN column, “From Breeders' Cup to Bullring” (read it here), raised the issue of whether a Thoroughbred who drops that far down the class ladder should be considered an “at-risk” horse even after passing required racing commission pre-race veterinary checks.

Chips All In had already been retired once by previous owners in 2014. But a year later, he was put back into training and subsequently switched owners several times after being claimed twice.

Ryan Hanson, one of the horse's current co-owners, had claimed Chips All In for $32,000 June 10, 2017, at Santa Anita Park. In a Sept. 4 phone interview, Hanson defended his partnership's subsequent decision to run Chips All In over the half-mile Blackfoot bullring, saying “this horse just acts like he needed a little confidence, so we sent him to the Idaho fair circuit to try and do that.”

But Hanson wasn't amenable to an interview when contacted by TDN on Monday, two days after Chips All In pulled up at Sandy Downs. He refused to discuss the nature of the horse's injury beyond confirming that Chips All In is still alive.

When given the opportunity to cite and correct the parts of the column that he believed were incorrect or not factual, Hanson would not provide specifics. The column specifically stated, “It needs to be underscored that the current connections of Chips All In have violated no rules by claiming and racing their horse where they see fit.”

Racing officials at Sandy Downs were unable to provide details on what happened in the race or about the current condition of Chips All In.

The Equibase official chart for the race lists the track condition as “fast” for that day's racing at Sandy Downs even though the weather listed in the charts was termed “rainy.”

“The weather was pretty bad that day. I was actually running around trying to keep the track in shape and keep everything going, “said Broc Gilstrap, the Sandy Downs racing secretary. “I actually didn't see it … I'm not sure if he just didn't like the mud, the footing, or what, but that's what it looks like to me from what I heard. We didn't have any horses that were hauled off or anything, so I'm assuming he's fine.”

Dave Wheeler, the Idaho Racing Commission state steward, told TDN he witnessed and officiated the race. But he said he would not comment on what he saw until he received an official report from the commission veterinarian.

A phone message to Dr. Kent Warner, the commission veterinarian assigned to Sandy Downs, was not returned prior to deadline for this story.

Chips All In is owned by a three-way partnership of Ryan and Jim Hanson and Robin Dunn. His trainer is Mark Hanson, who is Ryan's brother.

TDN knows of at least one standing offer to re-home Chips All In if the current connections are open to discussing that possibility.