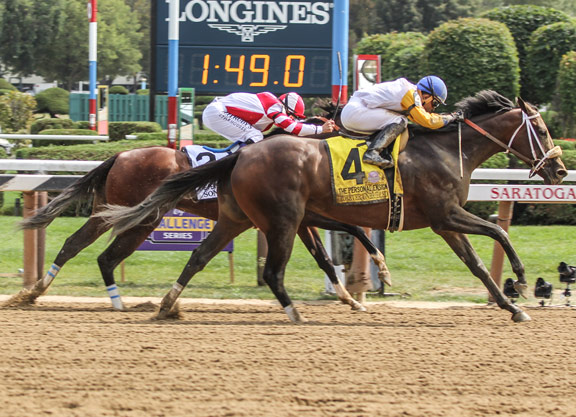 Forever Unbridled pulled off what will probably be considered the biggest upset of the day at Saratoga Saturday, running down popular two-time champion Songbird in the final strides of the GI Personal Ensign to win by a neck. Sent off as the 2-1 second-choice behind the Eclipse winner in this short field of four, the bay trailed the field in her usual fashion as Songbird ticked off opening splits of :24.14, :47.91 and 1:12.29. Swung out four wide entering the far turn, Forever Unbridled came charging down the center of the stretch as Hall of Famer Mike Smith implored Songbird for more. The favorite gave Smith all she had, but this time it just wasn't enough. Forever Unbridled closed powerfully to nab Songbird on the line for narrow upset.

“You knew [Songbird on the lead] was going to happen, you just had to go find her at the quarter-pole,” winning trainer Dallas Stewart said. “I just let [Joel] Rosario do his thing. I was hoping she'd get there, but you never know when you're trying to run down a champion. She kept coming back on and coming back on [after Songbird in the stretch]. It wasn't easy, but she did it. I don't think he ever hit her because she hates the whip. It's not easy to win a race like this against a champion.”

The conditioner added, “She'll likely go to the Beldame at Belmont next. It's the most logical choice for her next race, especially since she won it last year.”

Of the beaten favorite, Hall of Famer Jerry Hollendorfer said, “”She ran alright. She got beat by a good horse and we came up a neck short. [We'll] probably go back to California and try to prepare for the Breeders' Cup [Distaff] back there.”

Notching her first graded victory in the 2015 GIII Comely S., Forever Unbridled scored her first Grade I tally in Oaklawn's GI Apple Blossom H. last term and checked in second behind “TDN Rising Star” Cavorting (Bernardini) next out in Belmont's 2016 GI Ogden Phipps S. Third to that rival in last term's renewal of this test, the homebred returned to winning ways in Belmont's GI Beldame Invitational S. and completed the trifecta behind champions Beholder (Henny Hughes) and Songbird in a thrilling renewal of the GI Breeders' Cup Distaff Nov. 4. She prepped for this test with a victory in Churchill's GII Fleur de Lis H. June 17.

In partnership with Willis Horton, trainer Dallas Stewart campaigned Lemons Forever to a massive upset in the 2006 GI Kentucky Oaks, then sold the then 4-year-old filly to Charles Fipke for $2.5 million at the 2007 Keeneland November sale. The daughter of Critikola (Arg), a multiple group winner and Group 1-placed in her native country and twice Grade I-placed in this country, has become the anchor of the Fipke broodmare band. Lemons Forever is also the dam of Unbridled Forever (Unbridled's Song), winner of the GI Ballerina S. and third in the 2014 Kentucky Oaks, who produced her first foal this year, a colt by Medaglia d'Oro. The latter is also the sire of Lemons Forever's stakes-placed colt Forever d'Oro. Critikola's stakes-placed daughter Critikal Reason (Aptitude) is the dam of SW & GISP Bajan (Speightstown), a $300,000 purchase by the China Horse Club out of the 2014 Fasig-Tipton November sale. Lemons Forever produced a filly by Medaglia d'Oro in 2016, but aborted her foal by that sire from her most last cover. She visited that Darley sire again earlier this term.