Home » Archive » Shared News » For Just $5,000, Owner May Have Bought His Ticket to Kentucky Derby

For Just $5,000, Owner May Have Bought His Ticket to Kentucky Derby 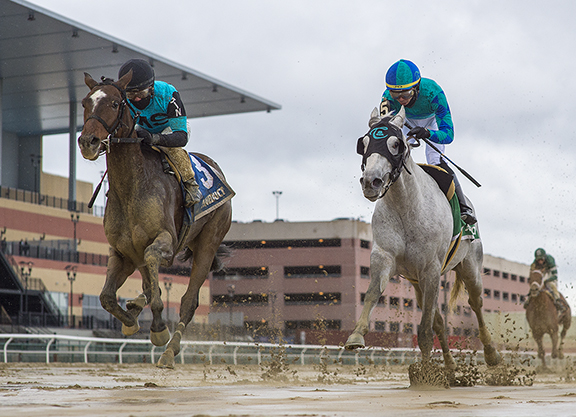 The Ocala Breeders' Sales Company's 2-year-old sales attract all the heavyweights in the business, people who are ready to spend millions and have proven records of picking out future stars. Then there is Mark Schwartz. Schwartz arrived at this year's OBS Spring sale with a modest budget and ready to buy a horse at a sale for the first time. A Brooklyn-born retiree living in Florida, he knew the odds were not in his favor.

“I did my research, but this was kind of like playing the lottery,” he said.

And sometimes you buy the winning ticket.

In a story that should give hope to anyone who has ever gone to the sales with big dreams and a small bankroll, Schwartz paid just $5,000 for a horse that is now in the mix for next year's GI Kentucky Derby. That's what he paid for Brooklyn Strong (Wicked Strong), the New York-bred gelding who won Saturday's GII Remsen S. in the slop at Aqueduct. Of the 779 2-year-olds sold at the sale, only one went for less money.

“I was there looking for bargains,” he said. “I'm not one of those guys who can spend $100,000 for a horse. There was no way in my wildest dreams I could have expected this. You hope maybe he could get to the allowance races. Maybe I would have a good claimer. But this proves that with a lot of horses you sometimes can get lucky. Look at what happened with California Chrome.”

According to Equibase, Schwartz was 0 for 24 as an owner before Brooklyn Strong came around, but he says he has owned some winners that were part of partnerships. Part of the problem was obvious: he didn't have much money to spend. That was still the case entering the Ocala sale when he showed up without his trainer, Danny Velazquez, who stayed behind at Delaware Park because of the coronavirus.

That left Schwartz to go it alone. He did his homework, studying the catalogue and watching the works. He made a list of horses he liked, realizing most would be out of his price range. He hoped to not pay more than $15,000 for a horse. With Brooklyn Strong, Schwartz liked the horse's work, which went in :10 2/5, and was impressed by the pedigree on the dam's side. The dam is Riviera Chic, who is by Medaglia d'Oro and had two winners from her first three foals.

Schwartz said the bidding began at $1,000 and stopped with his bid of $5,000. He does not understand why there was not more interest in the horse.

“Maybe there wasn't much respect for his sire, Wicked Strong,” said Schwartz, who also brought a Will Take Charge filly (hip 474) at the sale for $10,000. “But I don't really know what turned other people off. It couldn't have been the workout, it was good. He had a little knot on his knee, but that was nothing serious. I was kind of shocked. I never thought I'd get him for $5,000.”

Brooklyn Strong, who was bred by Cheryl Prudhomme and Dr. Michael Gallivan  sold originally as a weanling for $30,000 at the Fasig-Tipton New York Saratoga Fall Mixed sale. He later RNA'd at two yearling sales, one time for $42,000, another for $6,000

After the sale, Schwartz called Velazquez to ask what he thought of the purchase. Velazquez told him he really didn't have anything to lose.

“He asked me what I thought and I said, 'He looks good to me. What's the worst thing that can happen? You only paid $5,000 for him.'” Velazquez said.

Brooklyn Strong made his debut Sept. 12 at Delaware Park, winning a $40,000 maiden claimer. He then ran third in the Bertram Bongard S. and followed that up with a win in the  Sleepy Hollow S. Both races are for New York-breds. The gelding had proven he could compete at a high level against state-breds, but the Remsen loomed as a much bigger challenge. The competition included Known Agenda, a homebred by Curlin, Ten for Ten (Frosted), who cost $410,000 at Keeneland September, and GIII Nashua S. winner Pickin' Time (Stay Thirsty).

“We knew going in that he would have to show his class and that open company is a lot different than New York-breds,” Velazquez said “There were a couple of horses in there that they paid a lot of money for. We knew we were going against the big boys. I knew we were extremely ready. I told Mark that if we lose we lose, but that we were going in there 1000% ready, well trained, well prepared and healthy.”

The Remsen turned into a two-horse race, with Brooklyn Strong prevailing by a neck over Ten for Ten. It was the start of a huge weekend for Velazquez. The Remsen was his first graded stakes win and the next day he won the New York Stallion Series S. with Laobanonaprayer (Laoban).

Velazquez has yet to pick out another start for Brooklyn Strong, but said the Feb. 6 GIII Withers S. at Aqueduct is a possibility.

Considering his success on the track and that he is owned by someone of modest means, Brooklyn Strong would seem like the type of horse that someone looking for a Derby contender would swoop in and try to buy. But Schwartz said he hasn't had any serious offers. For now, that's fine with him. It lets him focus on trying to make it to the Derby.

“I'm an optimistic person and a dreamer,” he said.

And, maybe, just a little but lucky.