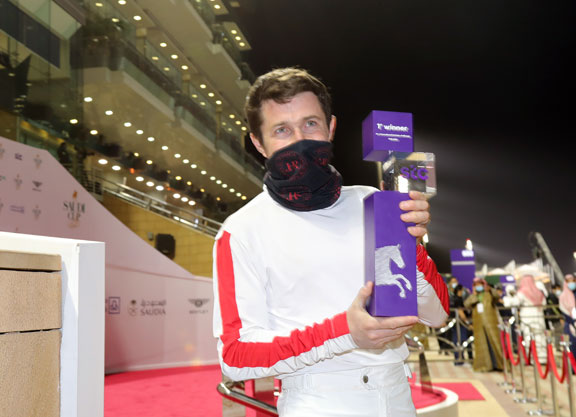 Irish jockey Shane Foley took top honours in the stc International Jockeys Challenge in Riyadh in Friday after winning two of the four races comprising the contest, which set the stage for Saturday's card that includes the $20-million Saudi Cup.

Foley beat just three home in the opening leg of the challenge, which was won by Mike Smith, who was deputizing for jockey John Velazquez whose trip to Saudi was dashed on account of travel-related issues. Foley turned things around in the next race, however, navigating Emblem Star (Take Charge Indy) from the extreme outside gate 14 to take up a handy position before kicking clear by four lengths. Foley made it a double in the next with Motawariyah (KSA) (Fong's Thong), who similarly exited gate 13, and although he was unplaced in the final race his lead was safe, with his closest pursuer Smith finishing fourth. After sealing the championship, Foley paid tribute to the late Pat Smullen.

“It's fantastic to be involved, and maybe I wouldn't be here if Pat Smullen was here,” Foley said. “He'd have probably got the invite as he was the go-to man and it's days like today that make you think of Pat, but he'd be proud of me I think.”

Of the event, he added, “When you're competing in these races it's a random draw, so you've a chance of getting on a fancied horse and I was lucky enough to draw two that had chances. I had a nice run around on both of them and they both won. I know they're not group races, but it's on the big stage with a lot of people watching and obviously good for your career. It's up there was one of the most enjoyable nights I've had for a while.”

Saudi rider Adel Alfouradi won the final leg of the challenge, giving him enough points for second, while Mike Smith, who is in town to ride Charlatan (Speightstown) in the Saudi Cup, was third.