Flying High in the Pegasus 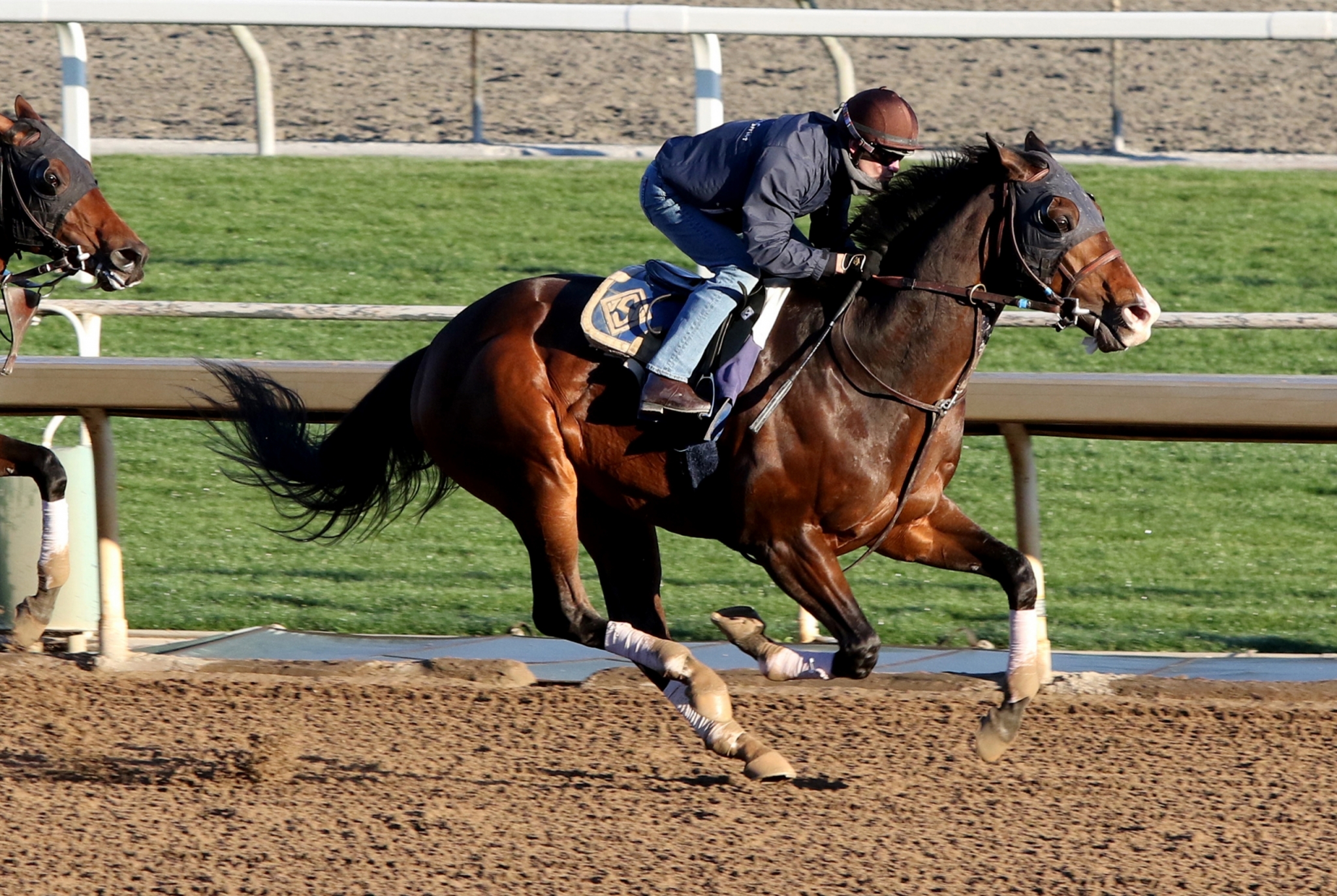 The defections of two of favorites Omaha Beach (War Front) and Spun to Run (Hard Spun) saw Saturday's GI Pegasus World Cup Invitational S. lose some of its star appeal, however, a solid group of graded stakes winners will try and collect the lion's share of the $3-million purse. Trainer John Sadler, who finished third in this race last season with 2018 Champion Older Horse Accelerate in 2019, offers the talented but at times unlucky Higher Power (Medaglia d'Oro), who breaks from post 6. Knocking on the door to bigger and better things early in the year, the 5-year-old broke through with a career-best performance in Del Mar's GI Pacific Classic Aug. 17. Third following a stumbling start in the GI Awesome Again S. Sept. 28, the Hronis Racing LLC runner once again found himself farther back than he wanted to be in the early going of the GI Breeders' Cup Classic and had to settle for third-beaten 8 ½ lengths-by Vino Rosso (Curlin), named Champion Older Horse Thursday night. Set to be ridden by Flavian Prat, who was aboard for his Grade I victory, Higher Power comes into this nine-furlong test off a pair of sharp works, including the most recent a visually impressive :59.60 move (2/66, XBTV) at Santa Anita Jan. 18.

HRH Prince Faisal Bin Khaled's Mucho Gusto (Mucho Macho Man), a graded winner and Grade I placed at two, proved consistent in 2019, finishing in the money in six of seven starts, including wins in the GIII Robert B. Lewis S., GIII Laz Barerra S. and the GIII Affirmed S. in June. Runner up behind subsequent champion 3-year-old Maximum Security in the GI Haskell Invitational S. at Monmouth in July, the chestnut was third in the GI Travers S. before rounding out the season with a fourth in the GIII Oklahoma Derby Sept. 29. Ridden for the first time by freshly anointed Eclipse Award winning jockey Irad Ortiz Jr., who was collecting his second straight title, the colt is trained by Bob Baffert, who won the inaugural renewal of the Pegasus World Cup with Arrogate in 2017 and was second with West Coast in 2018.

“It's going to be tough, but there aren't any easy spots,” Baffert said. “It's a tough field, so you need a lot of racing luck leaving there. He's quick. He's got a lot of speed.”

Famously known for defeating Triple Crown champion Amercian Pharoah in the 2015 GI Travers S. with Keen Ice, Dale Romans attempts to play the role of the spoiler once again Saturday with Jim Bakke and Gerald Isbister's Mr Freeze (To Honor and Serve). The 5-year-old, who drew the eight hole, recorded a single victory in 2019 in the eight-furlong GIII Ack Ack S. at Churchill Downs in September before finishing runner up behind Tom's d'Etat in a sloppy renewal of the GII Fayette S. at Keeneland Oct. 26 and most recently finished behind that rival in third in the Nov. 29 GI Clark S. The chestnut recently posted a 1:00.1 work (XBTV) at Gulfstream Jan. 18.

Luis Saez will ride Mr Freeze for Romans, who is competing in the Pegasus for the third time in its four-year history. Prayer for Relief ran 10th in 2017 and Singing Bullet was 11th in 2018.

One-time claimer Tax (Arch) won a pair of graded stakes in 2019, including last summer's nine-furlong GII Jim Dandy S. at Saratoga. Seventh in the Travers, the Danny Gargan-trained gelding rounded out the season with a runner-up effort in the GIII Discovery S. at Aqueduct Nov. 30. Jose Ortiz accompanies the dark bay for the first time Saturday.