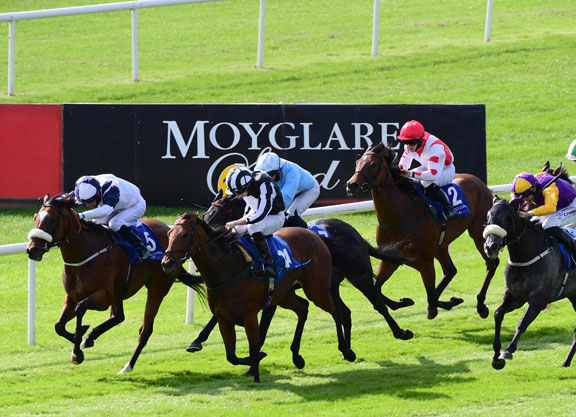 It was all about the fillies and mares in Sunday's G1 Derrinstown Stud Flying Five at The Curragh, with last year's G1 Prix de l'Abbaye de Longchamp heroine Glass Slippers (GB) (Dream Ahead) prevailing after a tussle with compatriot Keep Busy (Ire) (Night of Thunder {Ire}). Last seen finishing second to Battaash (Ire) (Dark Angel {Ire}) in Goodwood's G2 King George S. July 31, the Bearstone Stud homebred was in touch against the far rail but under the pump at halfway. Rallying gamely to wear down Keep Busy in the last 100 yards, the 9-2 shot answered Tom Eaves's every call to score by half a length, with the same margin separating her and the Irish filly Sonaiyla (Ire) (Dark Angel {Ire}). In perfect symmetry, there was also that distance to the mare Maid In India (Ire) (Bated Breath {GB}) in fourth as the distaffers dominated. “Kevin [Ryan] was very happy with her and this had always been the plan, as she takes time to warm into the season and comes good at this time of year,” the winning rider said. “It's paid off and she's an amazing filly who was spot-on for today. She found a few pounds and kept improving from the middle of the year last year and has thrived again. You can do anything with her, she is so relaxed and has a great mind and is very tough. They went a good pace and I had to squeeze at halfway, but I knew she'd come home as she stays well.”

Whatever is in the air in the North of England, it seems to aid the development of top-class sprinting fillies and mares and despite the disappointments of Que Amoro (Ire) (Es Que Love {Ire}) and Liberty Beach (GB) (Cable Bay {Ire}) here, it is notable that the first, second and fourth are trained by Kevin Ryan, John Quinn and Eric Alston respectively. Glass Slippers was winning the G3 Qatar Prix du Petit Couvert at ParisLongchamp on this day last year, coming alive after a lethargic first half of the race to back up her breakthrough win in Deauville's Listed Prix Moonlight Cloud. When she went to the Abbaye, she was a different proposition as she took early control and galloped relentlessly clear for an authoritative three-length success.

No match for Battaash in his own backyard at Goodwood, she will meet him again on the first Sunday in October according to Ryan. “She has a lot of class and loves it when they go really quick, but the ground was tacky today so she's done well to cope with that,” commented her trainer, who was forced to watch from home. “Darren Bunyan has done a marvellous job with her the last 48 hours, it's not easy handing it over to someone else, but he's produced her in tip-top shape so I'm very thankful to the Curragh and Darren. It was [Bearstone Stud's] Terry Holdcroft's decision to miss the Nunthorpe and give her a bit more time and he's obviously been vindicated. She's an amazing filly, so simple to train and makes my job very easy. She'll go back for the Abbaye now.”

Glass Slippers is the last living foal and second black-type winner out of Night Gypsy (GB) (Mind Games {GB}) following the Listed Radley S. scorer and G3 Oh So Sharp S. runner-up Electric Feel (GB) (Firebreak {GB}). The dam is a full-sister to the Listed Hilary Needler Trophy winner and stakes producer On the Brink (GB) and a half to Eastern Romance (GB) (Oasis Dream {GB}) who also achieved black-type success in France in the Listed Criterium de Vitesse and was runner-up in the G3 Ballyogan S.