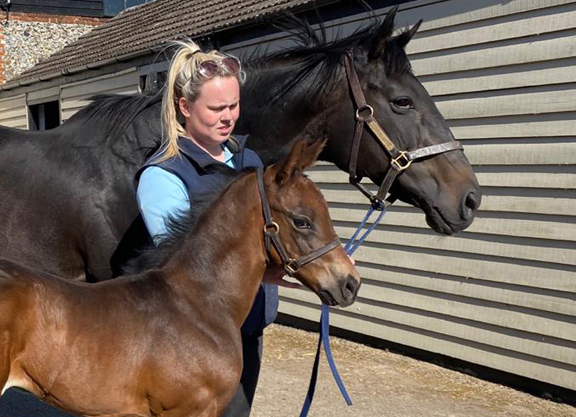 The story of Attraction (GB) (Efisio {GB}) is one that gives all breeders hope. The crooked-legged filly who was too poorly conformed to go to the sales grew up to be a Classic heroine, her untidy gait propelling her through an unbeaten juvenile season and on through Newmarket's famous Dip to win the 1000 Guineas. And she didn't stop there.

On the Curragh, Attraction added a second Guineas title to her extraordinary winning stretch, and then a crowning in front of Her Majesty the Queen in the G1 Coronation S. at Royal Ascot. The Group 1 haul continued, with the Sun Chariot S. at the end of her 3-year-old season, and one last hurrah at Leopardstown to claim the G1 Matron S. at four. What a filly.

Though trained in Yorkshire by Mark Johnston, Attraction was, like her trainer, made in Scotland. She gave her owner-breeder the Duke of Roxburghe much cause for celebration throughout her racing career and then made a triumphant return to his Floors Stud just outside Kelso.

Guy Innes-Ker, the 10th Duke of Roxburghe, died last August but his equine pride and joy is still a mainstay of his breeding operation. Now 19, Attraction traditionally spends most of the year at Floors before heading to Luca and Sara Cumani's Fittocks Stud near Newmarket to be foaled. Last week she delivered her 13th foal, a Dubawi (Ire) colt, on April 13.

“She's absolutely fantastic, a stunner really,” says Sara Cumani of her annual visitor. “She was not only a great racehorse but she also hasn't done badly at all as a broodmare. To be at the age she is and have the number of foals she has had is fantastic. And the quality of foals too—they all weigh an absolute ton.”

In 14 years at stud, Attraction has had just one season when she wasn't covered, in 2014. Her offspring are led, in both ability and sales price, by Elarqam (GB) (Frankel {GB}), her eighth foal and winner of the G2 York S. for Sheikh Hamdan, who bought him as a yearling for 1.6 million gns. Elarqam's five wins also include the G3 Tattersalls S. and two listed contests and, now five, he too is trained by Johnston.

Another son, Neoattraction (GB) (Montjeu {Ire}), was bought by JS Company as a yearling and was exported to Japan, where he stood at Arrow Stud for a time.

Cumani says, “Attraction's feet have always been something that we have had to look after very carefully especially when she's heavy, but she's a star and she really does seem to do it so professionally when she's producing her foals.”

Of this year's foal, who weighed in at 64kg, she adds, “I wouldn't say he's a typical Dubawi but he's a typical Attraction. He's good, strong, well made—couldn't be nicer. I just hope he's really lucky for the duchess and the family and gives them all encouragement to keep going.”

Floors Stud has sent seven mares to Fittocks this foaling season, including Titivation (GB) (Montjeu {Ire}), a half-sister to Attraction and the dam of listed winner Titi Makfi (GB) (Makfi {GB}), who is visiting Frankel (GB).

“They send their mares down roughly two months before foaling and then they stay with us until they're about 42 days in foal,” says Cumani. “Fusion, another half-sister, had a nice Siyouni foal the night before Attraction foaled.”

Attraction's offspring have been a highlight of the Floors Stud drafts during the Tattersalls October Yearling Sales over the years, with two selling in excess of a million gns and another four bringing six-figure returns.

Cumani admits to a soft spot for the mare's current 3-year-old Motion (GB), a daughter of Invincible Spirit (Ire) who was retained by the Duke of Roxburghe.

She says, “She was an absolute stunner. It was just one of those lightbulb moments when she was born, she was up and on her feet instantly and was just completely beautiful. She's now in training with Mark Johnston and we're all hoping that Mark gets better soon.”

As for Attraction, her next outing will be a return to Banstead Manor Stud to visit Kingman (GB) for the first time.