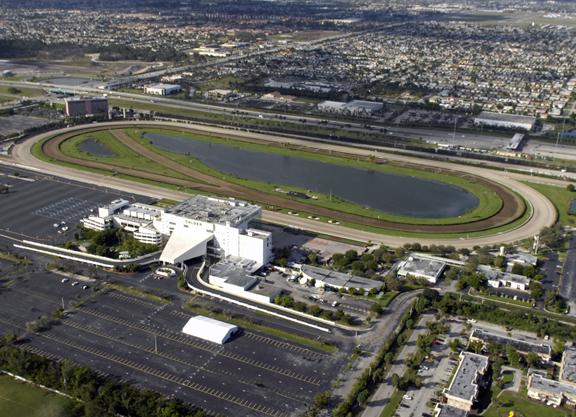 Saturday's opening day at the meet rebranded as Gulfstream Park West will truly mark the beginning of an end. Barring an 11th hour reprieve from the courts, the 40-day season will be the last ever run at Calder Race Course, the meat-and-potatoes South Florida track that has been operating since 1971.

Since 2014, the racing operation has been leased by Calder's owner, Churchill Downs Inc., to Gulfstream Park's owners, The Stronach Group, which renamed the track Gulfstream Park West. That lease expires at the end of the year and TSG is in the process of putting together a 2021 racing schedule that does not include a Gulfstream Park West/Calder meet.

Calder opened May 6, 1971 with 16,263 fans in attendance and the handle was $712,931. The New York Times reported that the meet “got off to a flying start” and that there were so many people looking to get into the track that they had to close the gates and turn some would-be patrons away.

Calder bridged the gap between the winter and early spring meets that were held at Gulfstream and at Hialeah and ushered in an era of year-round racing in South Florida. While Calder was never as glamorous as the other tracks in the area, it satisfied a need and was a starting point for many successful jockeys, trainers and horses. In 2000, Calder inaugurated the “Summit of Speed” program, which featured several major stakes races, all of them sprints.

“Calder was a workingman's racetrack and a lot of fine horses came from there that competed on all levels, whether it was Spend a Buck to a horse I had, Three Ring, who went on to win all sorts of graded stakes races,” said veteran trainer Eddie Plesa Jr. “My father was the second one through the backstretch gates when it first opened. A lot of people did great there and Calder launched the career of a lot of horsemen. Calder was a great place for me and my family. It gave us a lot of stability and it gave me time to be with my family. I am going to sorely miss it.”

Calder's future changed directions when it was purchased for $87 million in 1999 by Churchill Downs. Over the years, Churchill has become increasingly less interested in racing and has been focusing on gaming. Following the end of the 2015 meet, Churchill had the grandstand torn down, leaving little behind but the racetrack itself.

In 2010, a casino opened at Calder. Florida law required Churchill to run a live racing meet of at least 40 days in order to keep its casino license, but Churchill found a loophole in the law and argued that any form of pari-mutuel wagering would satisfy the requirements for a casino. In May, 2019, Churchill opened a jai alai fronton, which is far less costly to operate than a racetrack, on the grounds. Four months later, a Florida Court upheld a decision by the state's Department of Business and Professional Regulation's Division of Pari-Mutuel Wagering that allowed Calder to tie its casino permit to jai alai. Horse racing was no longer needed.

“I feel that Churchill Downs didn't do its best for horse racing,” trainer David Fawkes said. “They've done the same thing in Chicago with Arlington and to Hollywood Park. It's sad because we all got on board to help them get their casino and once they got what they wanted, they were done with us.”

The Florida HBPA and other industry groups have continued the battle in the courts, hoping to reverse the decision that approved the casino-jai alai marriage. But Gulfstream management is proceeding as if racing will no longer continue at Calder after the meet ends Nov. 28.

“It”s the end of an era,”said Bill Badgett, the executive director of Florida Racing Operations for The Stronach Group.

Though overshadowed by Gulfstream, the abbreviated Calder meets served a purpose. It is difficult for any track to operate year-round, especially one that relies so heavily on turf racing, like Gulfstream does. The two months when racing was conducted at Calder were used to give Gulfstream a break and to prepare the turf course for the Championship Meet.

Badgett said that the plan is to operate Gulfstream year-round in 2021, but said that not all the Calder dates will be made up.

“We're in the process right now of creating the calendar for 2021,” Badgett said. “Most likely, we will lose about 20 days out of the 40. The two months when we race over there is the time we get things ready here for the championship meet, with the turf. It could be that in November we possibly could race over the Breeders' Cup days and take the rest of the month off and then get ready for the Championship Meet. That would give us almost three weeks off for the turf course. Maybe in October we'll only run three days a week. We will try to run a few less turf races during October. It looks like we have a pretty good plan we're going to be putting into place. To lose just 20 days, that doesn't hurt you that much in the long run.”

The other issue is stabling. Badgett said that there are 450 horses currently stabled at Calder. Gulfstream has reached an agreement whereby the horses can stay at Calder until Apr. 1. By that time, he said, an expansion project will have been completed at Palm Meadows to house the Calder horses and the backstretch workers who care for those horses.

Badgett is a former trainer who raced some at Calder before he went into racetrack management. Like so many others in South Florida racing, he has a soft spot for old Calder Race Course.

“When they tore the grandstand down, that's when everybody said that it was the beginning of the end,” he said. “It used to be a lot of fun to race there and they had great racing. I even remember running on Christmas Day there. But the game has changed and those days are long gone. It's sad.”