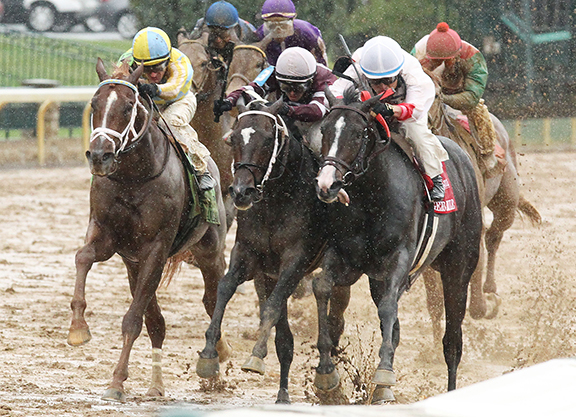 Flameaway reaffirmed his appreciation for a wet track, notching his second stakes victory over a sealed strip in Sunday's GIII Dixiana Bourbon S., which was taken off the turf after torrential rains pounded Lexington throughout the day.

“I've been wanting to run him on the grass, so I was a little disappointed,” trainer Mark Casse said of the surface switch. “He's getting better and better. He's a big strong horse, and I'm proud of him today. He's been training really well.”

A first-out winner sprinting over the synthetic strip at Woodbine, the chestnut made it two-for-two with a score in the off-the-turf Skidmore S. going 5 1/2 panels at Saratoga. His first trip around two turns in the Sept. 16 GIII Iroquois S. was a rough one, as the colt steadied early and was never able to get involved in a dull sixth-place finish. Entering this event off a bullet workout over the local strip Oct. 1, he was lukewarm on the tote board as impressive Kentucky Downs maiden winner Tap Daddy went favored.

Perched on the outside keeping a close eye on the pace through fractions of :23.25 and :48.46, Flameaway was given his cue on the far turn and responded in pursuit of the pair of Tigers Rule and Tap Daddy, who were forward from the outset. It was a three-horse race in the stretch, and just when it appeared that the resilient Tigers Rule had his rivals bested, the pair surged and created a blanket finish, with Flameaway getting his nose down on the wire in front. Tigers Rule crossed the wire ahead of Tap Daddy, but was demoted to third by the stewards for drifting outward in the stretch.

“We had a good trip,”said Flameaway's pilot Julien Leparoux, who also teamed with trainer Mark Casse to capture Friday's GI Darley Alcibiades S. with Heavenly Love (Malibu Moon). “We traveled very nicely. The other two horses, they had a good fight. He ran big.”

Although the Bourbon was moved off the turf course, its status as a “Win and You're In” qualifier for the World Championships was allowed to remain intact, granting Flameaway a berth in the GI Breeders' Cup Juvenile Turf.

The winner's dam Rose is a half to GSW Essential Edge (Storm Cat), as well as to the dam of stakes winner and 2017 Queen's Plate runner-up Tiz a Slam (Tiznow). Flameaway's third dam is Irish and English Group winner Flame of Tara (Ire) (Artaius), who also produced 1990 G1 Epsom Oaks and G1 One Thousand Guineas heroine Salsabil (Ire) (Sadler's Wells), G1 St. James's Palace S. winner Marju (Ire) (Last Tycoon {Ire}), etc. Vulcan Rose has a yearling colt by Victor's Cry and a weanling colt by Flat Out. She was bred back to Tiznow.