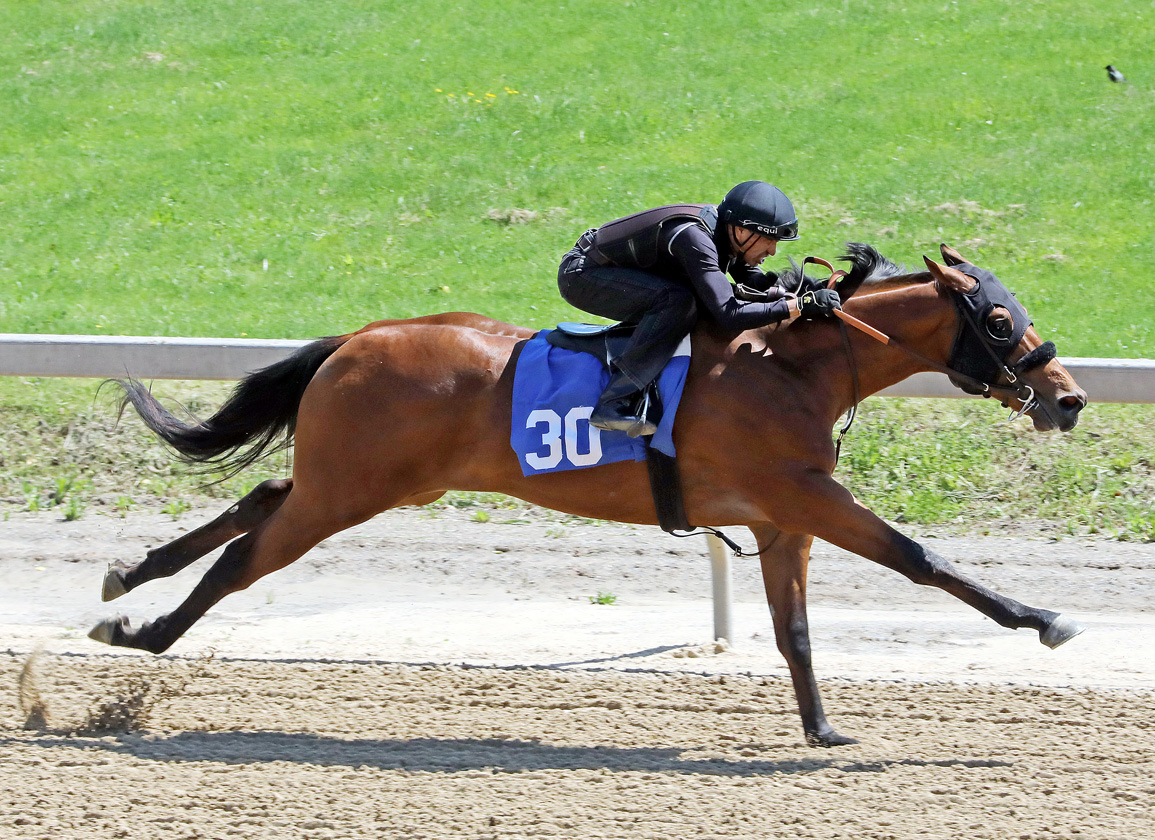 TIMONIUM, MD – The three-day under-tack show for the Fasig-Tipton Midlantic 2-Year-Olds in Training Sale began shortly after 8 a.m. Tuesday morning under cloudless blue skies and temperatures hovering around 60 degrees and by the conclusion of the day's seventh and final set shortly before 3 p.m., with temperatures approaching 80 degrees, five horses had turned in the co-fastest furlong time of :10 flat. A filly by Collected had the day's fastest quarter-mile work of :21 1/5.

A filly by Nyquist (hip 150) was the first to hit the :10 flat mark while working during the second set for consignor Randy Miles. The chestnut is out of Westside Tapstress (Lookin at Lucky), a half-sister to graded stakes winner Discreet Hero (Honour and Glory).

“We knew she could do it, but your nerves take over as you're leading her up there, hoping that nothing happens,” Miles said after the work. “She performed the way she was supposed to and I'm glad she represented herself well.”

Miles is consigning the filly on behalf of her breeders, Todd and Chad Frederick and Carl Thomas Potter.

“We've had some horses for them in the past and they entrusted us with two really nice horses this year,” Miles said of the breeders. “The first one sold well in April and this is the second one.”

Miles admitted he is a big fan of the Midlantic May sale.

“We love this track and when you get a week like this of great weather, it's so fun to come here,” he said. “This filly got over the track great all week and she loved the weather, the low humidity and cool weather. When Mother Nature cooperates, it's a wonderful place.”

Miles sent out four horses to work throughout Tuesday's session and said he had found the track to be consistent from start to finish.

“The track was beautiful,” he said. “They did a great job with the 25 horses and then a break. They kept it so consistent. It doesn't matter whether you go early or late.”

Juveniles from the first crop of Bolt d'Oro have been in demand at the auctions all spring and a son of the Spendthrift stallion (hip 30) was the second to work in :10 flat during the session's fourth set. Consigned by Pike Racing, the bay is out of stakes-placed Shine Softly (Aldebaran), a daughter of champion Soaring Softly (Kris S.) and also the dam of stakes winner The Grass is Blue (Broken Vow). Al Pike purchased the youngster from Peter O'Callaghan's Woods Edge Farm for $90,000 at last year's Keeneland September sale. O'Callaghan had acquired the colt for $65,000 at the 2020 Fasig-Tipton November sale.

“He was beautiful,” Pike recalled of the colt as a yearling. “He was in Book 2 with Woods Edge and he was a little immature at the time, because he's young, and Peter had a stunning group of Book 2 horses. So I think he got a little bit overlooked. I was very fortunate to get him. We've liked him all winter. He's done nothing wrong. We came here thinking he was capable and hoping that he would perform and we were pleased with him.”

Pike's consignment topped the 2020 Midlantic sale with a $1.1-million son of Uncle Mo.

“This is one of our favorite spots,” Pike said of the Maryland auction. “We always try to bring a good horse here because you'll get rewarded.”

Grassroots Training and Sales sent out a filly by Neolithic (hip 9) to work one of three :10 flat works during the day's fifth set. Out of multiple stakes placed Sarahline (Northern Afleet), the chestnut was purchased for $8,500 at last year's OBS Winter sale.

Hip 20, a son of More Than Ready, turned in his :10 flat work for Keiber Rengifo's Golden Rock Thoroughbreds. A $12,000 Keeneland September purchase by Jose Silva, the bay is out of Seeking Sheba (Seeking the Gold) and from the family of champion Perfect Soul (Ire).

Completing the :10 flat works was hip 36, a New York-bred gelding by Practical Joke consigned by Scanlon Training and Sales. The bay is out of the unraced Silken Lily (Grand Slam), a half-sister to multiple graded-stakes winning sire Upstart (Flatter). He sold for $30,000 at the Fasig-Tipton New York-bred Yearling sale last August.

“He is a horse we took a little bit of time with,” Dave Scanlon said. “I don't know that they announced it during the breeze, but he is a gelding now. We bought him privately after the New York sale and he always looked fast. He had a great hip and body, but he was just a little bit tough through the breaking. So around December, we just decided, let's make life easier on me and you and everybody else. So he became a gelding. And then we took our time with him. He's always had a great hip, he just needed to level out. My assistant and I were just talking about how he is just looking better and better. Every work, he's just been getting better.”

The Scanlon team comes into the Midlantic sale off a strong OBS Spring sale, which included a $1.3-million Mendelssohn colt.

“It's been great,” Scanlon said of his 2021 results so far. “We've had a really good year. We were pretty excited last year when we bought these horses. We thought we had done a good job picking them out and it's been a great group all year. We were excited for OBS, but we've been excited about coming here. I love to bring my New York-breds here. Horses that we find quick and precocious–horses like Army Mule–we've always done really well with here.”

A filly by Collected (hip 202), the first horse to work during the second set, turned in the fastest quarter-mile work of :21 1/5 for Jesse Hoppel's Coastal Equine. Out of Aurore (Arch), the dark bay is a half to stakes-placed Orageuse (Broken Vow) and Boreale (Makfi). Her dam is a half-sister to multiple graded stakes winner Interactif (Broken Vow). She was purchased by Larry Zap, Hoppel and Amanda Murphy for $47,000 at last year's Fasig-Tipton October sale.

The Midlantic under-tack show continues through Thursday with sessions beginning daily at 8 a.m. at the Maryland State Fairgrounds in Timonium. The auction will be held next Monday and Tuesday with bidding commencing both days at 11 a.m.