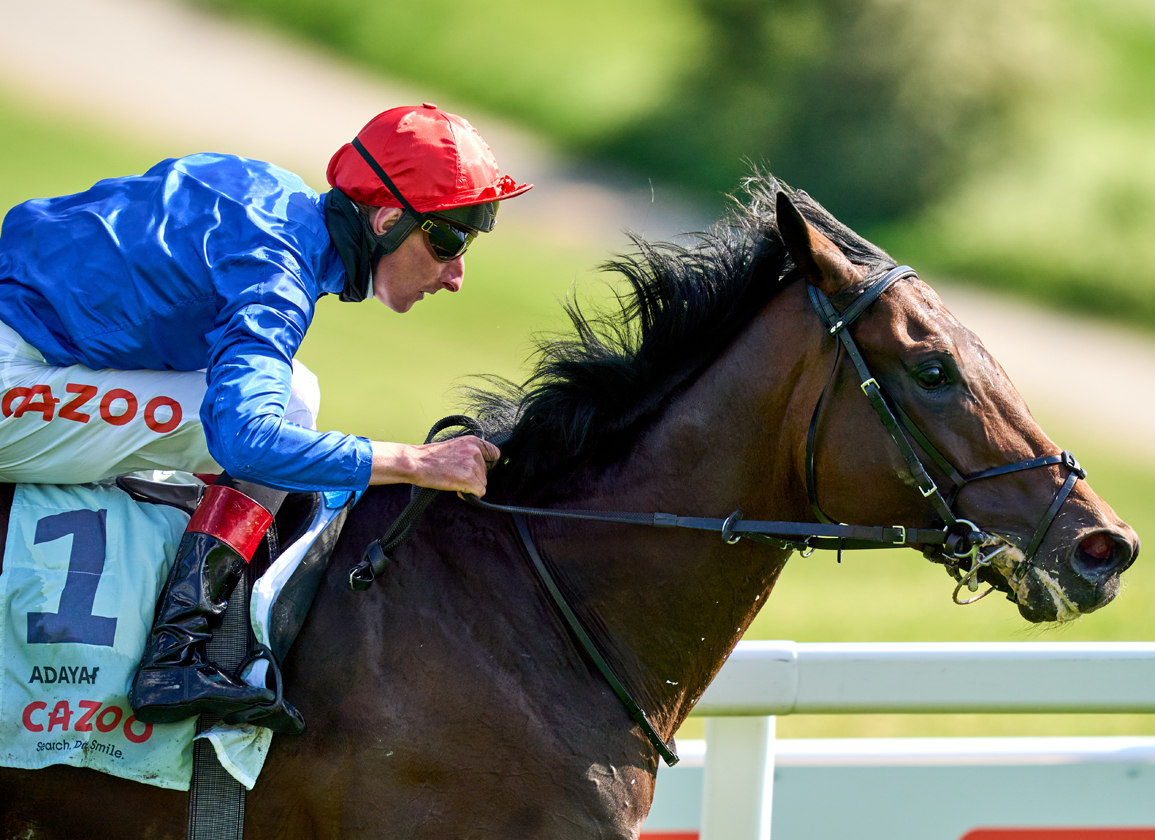 Adayar, one of six in the King George | PA Media

“There are thunderstorms forecast and a good chance of heavy showers,” Menuisier told the Racing Post. “That doesn't mean Ascot will get them, but as long as it remains a possibility we owe it to the filly to keep her in the race and take her to Ascot on Saturday, where we will sit and wait. If it doesn't rain, we'll come home and enjoy the drive back.”

Adayar will be looking to become the first blue riband winner to prevail here since Galileo 20 years ago and trainer Charlie Appleby spoke after his breeze under William Buick at Moulton Paddocks on Thursday morning. “I couldn't be happier with him. It was a straightforward final piece of work and he will go there on Saturday with no excuses,” he said. “It's true that before Epsom, I thought he was shaping more as a St Leger type. He's so straightforward at home, he never stood out in his work but, having said that, we always felt he was very good. On Derby Day, he showed us a turn-of-foot we hadn't seen before and he has sharpened up a lot for that experience.”

“Like everybody else, we've got a huge watching brief on this,” he added. “Everybody's wanting to know how good the 3-year-olds are, particularly at a mile and a half. We would like to see what we are dealing with and I think the King George will provide the answers. Adayar is approaching his biggest challenge in tip-top condition and we are upbeat about accepting the challenge. His prep has been faultless. We have seen him maturing week on week. I believe he is physically stronger than he was at Epsom. When you see him in the paddock on Saturday, he won't look like a 3-year-old against older horses. He looks like an older horse now.”

On Friday, two high-class fillies share centre stage as they make their belated seasonal debuts. In Ascot's G3 British Racecourses Join Sunflower Lanyard Scheme Valiant S., George Strawbridge's 'TDN Rising Star' Indigo Girl (GB) (Dubawi {Ire}) is back in action for the John and Thady Gosden stable while the Niarchos Family's Alpine Star (Ire) (Sea the Moon {Ger}) tackles York's Listed British Stallion Studs EBF Lyric Fillies' S. Sticking to the mile trip over which she captured the G2 May Hill S. at Doncaster in September before finishing runner-up in the G1 Fillies' Mile at Newmarket the following month, Indigo Girl who is a full-sister to her owner-breeder's Group 1 heroine Journey (GB) is bred to want further in time.

“We had planned to bring Indigo Girl back in May, but she's had a few niggles so we're bringing her back in July,” John Gosden said. “She's been working nicely on the all-weather lately and this looks a nice starting point for her and she may go up in trip later on.”

Indigo Girl is joined by Strawbridge's winter acquisition Elysium (Ire) (Belardo {Ire}), who is also making her 2021 bow having last been seen winning The Curragh's G3 Weld Park S. in September. She remains in training with Noel Meade following her purchase and her trainer said,

“She's in good shape. We had kind of a miserable spring, as she got a few little respiratory problems which slowed her down. We struggled to get her right, but we think we're nearly there now and we really hadn't any place to start her in Ireland. Her owner has another runner in it and she's favourite, but that's the way it goes. She will improve for the run I'm sure.”

Also in the Valiant is Cheveley Park Stud's Sir Michael Stoute-trained Lights On (GB) (Siyouni {Fr}), who scored by 10 lengths in the Listed Pipalong S. over this trip on soft ground at Pontefract July 6.

The stud's managing director Chris Richardson said, “We've been thrilled with her this year. She ran no race at Royal Ascot [when eighth in the Kensington Palace S.] because of the draw really. The ground is going to be different on Friday. A bit of juice in the ground might have been helpful, but it's a logical race and we'll see what happens. John and Thady Gosden's filly was highly thought of last year, but our filly is in good form and has come out of her last race well.”

Alpine Star makes her keenly-anticipated return at York's evening meeting, with the Lyric Fillies' S. over an extended 10 furlongs an ideal slot for the G1 Coronation S.-winning half-sister to Alpha Centauri (Ire) (Mastercraftsman {Ire}). Last seen splitting Tarnawa  (Ire) (Shamardal) and Audarya (Fr) (Wootton Bassett {GB}) when runner-up in ParisLongchamp's G1 Prix de l'Opera in October, the Jessie Harrington-trained chestnut has no penalty here and anything other than a smooth return win will be a surprise. “It's a nice little start-off for her and then we can plan for the autumn. We've got loads of options,” her trainer commented. “She had a little setback earlier in the year, which is why we didn't get to run her. She doesn't have to carry a penalty and is taking on just fillies, so let's hope all goes well.”