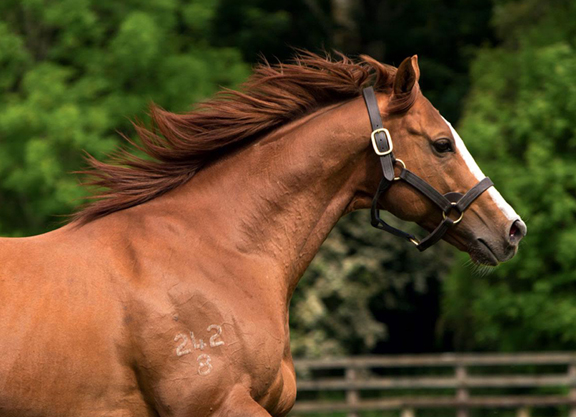 The Danehill branch of the Danzig line continues to thrive in both hemispheres and includes eight stallions with their first runners in Europe this season, 50 per cent of which are sons of Dansili (GB), who was responsible for last year's champion first-season sire, Zoffany (Ire).

Emma Berry: Bated Breath wasn't early but he was fast. He made his debut in the April of his 3-year-old season and bounced out to win three sprints in a row for Roger Charlton. The half-brother to Cityscape (GB) stayed in training until he was five and, never tried beyond six furlongs, his finest hour came in the G2 Temple S. over five, in which he beat Sole Power. Not for lack of trying is a Group 1 missing from his record: in nine starts at the highest level he finished second on four occasions and came closest when being beaten a nose by Dream Ahead in the G1 Sprint Cup at Haydock.

With more than 100 in his first crop, including half-sisters to Kingman (GB) and Tiggy Wiggy (Ire), he'll have a decent chance of following up on the good impression made by his youngsters at the sales.

Bill Oppenheim: His sire Dansili is one of a number of highly successful sires who just missed being Group 1 winners themselves and, coming from the same breeder, Juddmonte, Bated Breath is getting a big shot, with over 100 two-year-olds.

EB: A Newmarket maiden winner over seven furlongs as a 2-year-old, Delegator looked highly impressive when winning the G3 Craven S. on his 3-year-old debut before going on to finish second to Sea The Stars (Ire) in the 2,000 Guineas and also to Mastercraftsman (Ire) in the G1 St James's Palace S.

He was disqualified from his first-start victory for Godolphn in the G2 Celebration Mile after being found to have traces of a cortico-steroid in his system but later victories came his way in the listed Dubai Duty Free Cup at four and the G2 Duke of York S. when brought back to six furlongs as a 5-year-old.

He may not match some of his contemporaries on numbers but it would be no surprise to see him have some relatively early winners.

BO: His best form, as Emma points out, came when second to Sea The Stars in the G1 English 2,000 Guineas, and second to Mastercraftsman in the G1 St. James's Palace S. as a 3-year-old, running RPRs of 120 and 123 respectively. His yearling average was low, but the plus there is that people won't have so much investment to recover.

EB: I can still remember the look of bitter disappointment on the faces of team Shadwell when Elzaam lost the G2 Coventry S. by a nod of the head on the line to Strong Suit. Behind them both in sixth place that day was Zoffany (Ire).

Bred in Australia to northern hemisphere time, Elzaam was a €280,000 Arqana yearling purchase, news of the prowess of his sire Redoute's Choice having reached Europe way before the Arrowfield star ever touched down in Normandy himself. Elzaam claimed a listed sprint at Newbury at three and was beaten only two lengths when fourth behind Society Rock (Ire) in the G1 Golden Jubilee S. on his return to Royal Ascot.

Joe and Jane Foley's Ballyhane Stud is well patronised by plenty of commercial breeders in Ireland and beyond and Elzaam received decent support on his retirement there. Unsurprisingly, Shadwell have supported him at the sales, with his three most expensive yearlings now being in Sheikh Hamdan's ownership, including the top-priced Mutahaady (Ire), bred by TDN correspondent Kevin Blake.

BO: A useful sprinter for Sheikh Hamdan by Redoute's Choice, he is in the hands of expert marketer Joe Foley. From just a €4,000 stud fee he had 59 yearlings average €24,274 so will have plenty of chances for some quick early winners.

EB: Remove Frankel (GB) from the equation and Excelebration would have been the stand-out miler of his generation. The duo met on five occasions, with the latter filling the bridesmaid role in all bar one contest, when Zoffany (Ire) split them in the St James's Palace S. and finished closer to Frankel than any other horse, just three-quarters of a length in his wake. A dual six-furlong winner at two, Excelebration lifted the G2 Mehl Mulhens-Rennen (German 2,000 Guineas) and then notched his own Group 1 strike later that season in the Prix du Moulin. Switched from Marco Botti to Aidan O'Brien for his 4-year-old season after being bought by Coolmore, he added a further two top-level wins to his name in the G1 Prix Jacques le Marois and Queen Elizabeth II S.

His sire has been a champion down under and regularly provides fast, precocious types who sell well and run well. Excelebration has fulfilled the first of these criteria and he shouldn't lack racecourse representatives this season.

BO: By Exceed And Excel, he had the best mile form behind Frankel, running second to him four times and third once, and when Frankel stepped up to a mile and a quarter, Excelebration looked like Frankel against the rest of the opposition. On form I give this horse a big chance to make some noise as a sire.

EB: Longevity of racing career is no longer regarded as a selling point in a stallion's career but it should be and, in that regard, it's hard not to admire the durable and consistent Famous Name. Dermot Weld's protégé came alive at Leopardstown, the scene of 13 of his 21 triumphs, including three consecutive runnings of the G3 Meld S. In his final season, at age seven, he won seven of his nine starts, including beating Born To Sea (Ire) in the G2 Royal Whip S.

No late starter, however, he won on his juvenile debut over six furlongs in July 2007 and later thrived in races between a mile and 10 furlongs. He showed more stamina than his fellow Dansili sires here and has fewer to run for him but hopefully he will impart some of his own hardiness to his stock.

BO: This son of Dansili ran 38 times over six seasons, winning one Group 2 race, 12 Group 3s, and seven listed Races – a total of 20 black-type wins. He was the recipe for soundness and consistency as a racehorse, and he had a touch of class, too.

EB: Foxwedge, out of a five-furlong 2-year-old winner, is already off the mark with five winners in Australasia and his sire's swiftly rising profile in Europe will have done him no harm, despite the fact that he has not returned to Britain this season.

Third in the noted Golden Slipper trial, the G2 Todman S., he came into his own at three, winning three group races, including the six-furlong G1 MVRC William Reid S., and chasing home the ultra-smart Sepoy (Aus) in the G1 Coolmore Stud S.

Whitsbury Manor Stud has earned its reputation as a source of speedy runners over the years and is flying high with popular resident Showcasing (GB). The Harper family support their stalllions well with their own broodmare band and can rely on a loyal client base which will give Foxwedge a chance to make an impression in Europe.

BO: A good sprinter in Australia by Fastnet Rock, he was beaten a head by the rocket Sepoy early in their 3-year-old year and came back in the autumn to win a six-furlong Group 1. As Emma points out he had good support from the stud and a good range of breeders.

EB: The British-bred Singspiel mare Accessories has been a revelation for Darley in Australia, with four of her first five foals all being group winners, including the top-class Helmet, who has been joined among the Darley stallion ranks by his half-brother Epaulette (Aus) (Commands {Aus}). A scopey son of Exceed And Excel, Helmet started his winning over six furlongs at two, landed the G1 Sires' Produce S. over seven, and developed into a serious miler, with victories in the G1 Champagne S. and G1 Caulfield Guineas.

He hasn't had many runners yet from his first Australian crop but he made an eye-catching start in Europe on Saturday with his first two runners, Boater (GB) and Chupalla (GB), each winning on debut, just half an hour apart and by seven and six lengths respectively. Other first-crop runners to come include half-sisters to GI EP Taylor S. winner Folk Opera (GB) (Singspiel {Ire}) and G3 Hackwood S. winner and young sire, Heeraat (GB) (Dark Angel {Ire}).

BO: A three-time Group 1 winner in Australia at seven and eight furlongs at two and three by Exceed And Excel. Danehill's influence in Australia and their spread 'up north' can be summarised this way: the four horses not by Dansili on this list are all by Australian-bred sons of Danehill – two by Exceed And Excel, one each by Redoute's Choice and Fastnet Rock.

EB: Like his dam, the G1 Phoenix S. winner Damson, Requinto was up and out early and showed plenty of decent fast form at two, including his victories in the G2 Polypipe Flying Childers S. and G3 Molecomb S. Pitched into all-age company for his swansong in the G1 Prix de l'Abbaye, he was far from disgraced when beaten only two and a half lengths into sixth place and, regrettably, we never saw him on the racecourse again, though he didn't join the stallion ranks until he was four.

He doesn't have numbers on his side this year but it will be a big surprise if he doesn't fire in some early winners. The powerful 2-year-old trainers Richard Hannon and Richard Fahey each have several of his offspring in their stables, while he has nine catalogued for breeze-up sales at Ascot, Doncaster and Newmarket.

BO: Though his dam Damson was by Entrepreneur out of a Darshaan mare, she won the G2 Queen Mary over five furlongs at Royal Ascot as a 2-year-old and beat colts in the G1 Phoenix S. Requinto himself won the G2 Flying Childers and G3 King George S., both also at five furlongs, but is one of those who never ran again after his 2-year-old season. According to Weatherbys' figures, 47 of his 53 yearlings were sold at auction last year – nearly 90%.