First Foals Out of Grade I Winners on Offer at KEESEP 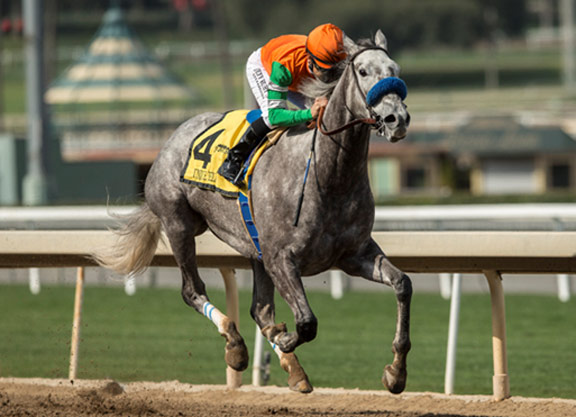 One of the highlights of Book 1 of the Keeneland September Sale each year is the opportunity to view and purchase the first foals out of some of the top racemares in recent years. This year is no exception with six such offerings available in Book 1. Below we feature six yearlings who are the first foals out of Grade I-winning mares, such as two-time champion Unique Bella (Tapit).

It Tiz Well won five of her 10 starts and was only out of the money once, earning over $1.1 million. She scored her first black-type win in the 2017 GIII Honeybee S. and captured the GIII Delaware Oaks three starts later. Second to Elate (Medaglia d'Oro) in the GI Alabama S. next out, the bay concluded her career with a two-length defeat of champion Abel Tasman (Quality Road) in the GI Cotillion S. at Parx. Retained by owner Tommy Town Thoroughbreds, It Tiz Well was sent to War Front for her first mating and the resulting colt is offered by Denali Stud here.

“It's a nice first foal with good leg and good scope,” Denali's Conrad Bandoroff said. “You see a lot of the mare with the Arch line coming through. He is a powerful colt, well balanced with a good hip, good shoulder and deep heart girth on him. He is a hard horse to pick on. He has good size and substance especially for a first foal. We are pretty encouraged for the mare's first effort.”

A $375,000 OBSMAR purchase by Speedway Stable, Noted and Quoted won the GI Chandelier S. in 2016. She retired with two wins from 13 starts. Bred to fellow Bob Baffert trainee and Horse of the Year Justify, the 'TDN Rising Star' was sent through the ring at the 2019 Fasig-Tipton November Sale, RNA'ing for $950,000. The resulting foal was a colt bred by Aaron and Marie Jones and consigned by Taylor Made Sales.

“This colt has really good size for a first foal,” Mark Taylor said. “He is a leggy individual, a lot like the other Justifys I've seen. He has a really good frame to him, looks like a two-turn horse. He is very correct with a lot of class. Noted and Quoted herself is a beautiful mare and was a Grade I winner at two. I think this colt is exactly what you would have hoped for from a mare of that caliber, especially for a first foal. This colt is very forward with a lot of stretch to him. He is a really nice horse.”

Sailor's Valentine upended the 2017 GI Central Bank Ashland S. at 22-1. She retired with two wins from 13 starts and over $400,000 in earnings. Purchased for $800,000 at the 2018 KEENOV sale by Town and Country Farms and Pollock Farms, the gray was sent to War Front for her first mating and was sent back through the Keeneland ring the following November, bringing $1.25 million from Bryant Prentice's Pursuit of Success. St. George Sales consigns the colt on behalf of the breeder.

“I like the horse very much,” Archie St. George said. “He is a big strong colt, a very good first foal. He is very straightforward. Obviously the mare was a very good racehorse and he is by a very good stallion in War Front.”

Salty scored her first black-type victory in the 2017 GII Gulfstream Park Oaks and was runner-up in that term's GI Acorn S. The bay capped her career with a win in Churchill's GI La Troienne S. in May of 2018, retiring with a record of 11-4-2-2 and $688,500 in earnings. She summoned $3 million from Don Alberto at that year's Fasig-Tipton November Sale and was sent to Tapit. The resulting filly is offered by Lane's End here.

Sippican Harbor had a short, but sweet career, winning the 2018 GI Spinaway S. She retired at the end of her juvenile season with just four starts under her belt. Lee Pokoik sent her to Medaglia d'Oro in 2019 and entered her in term's FTKNOV sale. She RNA'd for $1.45 million and her colt is in the Taylor Made consignment at KEESEP.

Unique Bella more than lived up to her 'TDN Rising Star' billing throughout her career. The $400,000 KEESEP buy won four consecutive graded events in California during her 2017 sophomore season. Off the board in that term's GI Breeders' Cup F/M Sprint, the Don Alberto runner rebounded with a victory in the GI La Brea S. Kicking off 2018 with a win in the GII Santa Maria S., the gray finished second in the GI Apple Blossom H. and followed that with a pair of wins in the GI Beholder Mile and GI Clement L. Hirsch S. Her 2018 campaign earned her a pair of Eclipse awards as the top female sprinter and top older dirt female. Her first foal is a Medaglia d'Oro filly, who is in the Denali Stud consignment.