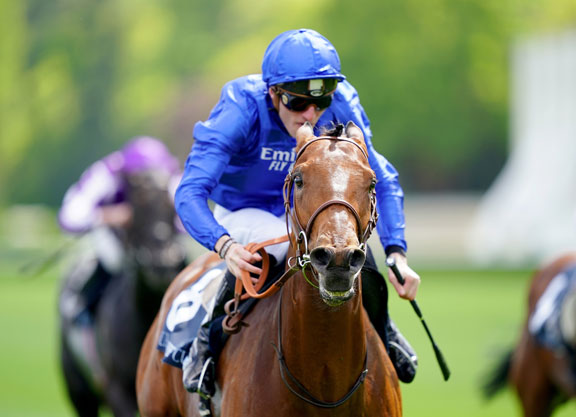 Testing conditions at ParisLongchamp on Sunday created by a deluge of rain meant that equine pyrotechnics were unlikely despite the formidable presence of Persian King (Ire) (Kingman {GB}). Hot favourite for the G1 The Emirates Poule d'Essai des Poulains, Godolphin and Ballymore Thoroughbred Ltd's TDN Rising Star duly won, but it was more a case of a thankless task being carried out in professional manner as he delivered a first Classic success for his exhilarating sire. Patiently ridden by Pierre-Charles Boudot in a share of fourth on the rail, the imposing bay was sent up the inner as the cutaway came in the straight. Sinking into the ground to a degree as he earned the advantage with 250 metres remaining, the 1-2 market-leader nevertheless kept on strongly and willingly to the line to score by a length from the similarly game Wertheimer representative Shaman (Ire) (Shamardal), with the British raider and 28-1 outsider San Donato (Ire) (Lope de Vega {Ire}) a head away in third. “The ground didn't help, as he is such a great mover with a beautiful action but he showed courage,” commented Andre Fabre, who was collecting a seventh edition. “On top of his ability and consistency, he's also a game horse built more for Cheltenham! He has proved his quality yet again and has done nothing wrong. He's in all those big races, but the [June 2 G1 Prix du] Jockey Club [at Chantilly] is very tempting. It looks like he'll stay another quarter of a mile.”

Persian King's fully-expected Classic triumph was just one more addendum to the remarkable tale of the Danzig sire line. Invincible Spirit (Ire), by Danzig's prolific Green Desert, had enjoyed a first of his own as Magna Grecia (Ire) provided him with an initial English Classic eight days earlier and now his much-lauded son Kingman is off the mark in this sphere with a member of his first crop. Fabre had spoken of the sire potential of Juddmonte's brilliant miler when pondering Persian King's program during the winter and it is fitting that the veteran commander general of the French training ranks is the one to benefit first from the transferring power of Banstead Manor's latest elite resident.

Carrying the Ballymore silks at two, the physically arresting bay from a distinguished Wildenstein family ran into Anodor (Fr) (Anodin {Ire}) on debut over 7 1/2 furlongs at Deauville in August and met with his sole reversal as the subsequent G3 Prix des Chenes winner quickened away in the straight. Next time he was at this trip, at which he would remain thereafter, he showed what the benefit of racecourse experience can do by slamming Juddmonte's Boardman (GB) (Kingman {GB}) by six lengths at Chantilly at the start of September. By the time he had turned back TDN Rising Star Lone Peak (Fr) (Lope de Vega {Ire}) with ease by five lengths back at Chantilly a fortnight later, he was already emphatically of pattern-race calibre but he was made to prove it by Magna Grecia in a demanding G3 Autumn S. at Newmarket in mid-October.

Fears that the rain-afflicted surface would take the shine off Persian King here were well-founded from a visual standpoint, but a quick analysis of the times of the course-and-distance G3 Prix de Fontainebleau staged on fast ground Apr. 14 and this reveal a different story. While he achieved a race-record time of 1:36.41 in that trial, this effort was carried out in a highly respectable 1:38.98 given the heavy surface. It is going to take hard labour to deny him the Poulains-Jockey Club double achieved by Brametot (Ire) (Rajsaman {Fr}) two years ago, fellow Fabre trainee Lope de Vega in 2010 and Shamardal in 2005.

One who looks unlikely to take up that particular challenge at Chantilly is the runner-up Shaman, who ran with great credit dropping back a furlong having won the G3 Prix la Force. “He has run a great race and was drawn wide while the winner was on the inside,” trainer Carlos Laffon-Parias said. “It's not made a huge difference, but maybe a little so he's given a great account of himself. Maybe we'll try to avoid the winner next time and he's in the [June 18 G1] St James's Palace Stakes as well as the Jockey Club and that could be his next race, but we'll decide in time.”

Roger Varian was also looking at the Royal meeting for San Donato, who was having his first start over further than six furlongs. “I'm delighted with his run, it was a great effort for a horse who hasn't run so far this year against two very good horses with a previous run behind them,” he commented. “He's a very nice-moving horse who is sure to appreciate faster ground than that and he has various possibilities.  He showed he stays a mile, but maybe that's his limit. He's in the [June 19 G3] Jersey [S. at Royal Ascot], the St James's Palace and the [G1] Prix Jean Prat [at Deauville July 7] which is over seven furlongs this year, so we'll see.”

Persian King is the second foal bred from the Mikel Delzangles-trained Pretty Please (Ire) (Dylan Thomas {Ire}), whose sole win came on testing ground over the Prix du Jockey Club course and distance in 2012. She is closely related to the G1 Prix Ganay hero Planteur (Ire) (Danehill Dancer {Ire}), who was second to Lope de Vega in the 2010 renewal of the “French Derby”, with their dam Plante Rare (Ire) (Giant's Causeway) being a half to three pattern-race winners headed by the four-times group 2 scorer Policy Maker (Ire) (Sadler's Wells) who was twice runner-up in the G1 Grand Prix de Saint-Cloud. The third dam Palmeraie (Lear Fan) is kin to the GII Long Island H. heroine Peinture Bleue (Alydar), who in turn is the dam of the 1997 G1 Prix de l'Arc de Triomphe and Prix du Jockey Club hero and leading sire Peintre Celebre (Nureyev). Pretty Please' 2-year-old filly by Australia (GB) is named Petite Folie (GB).