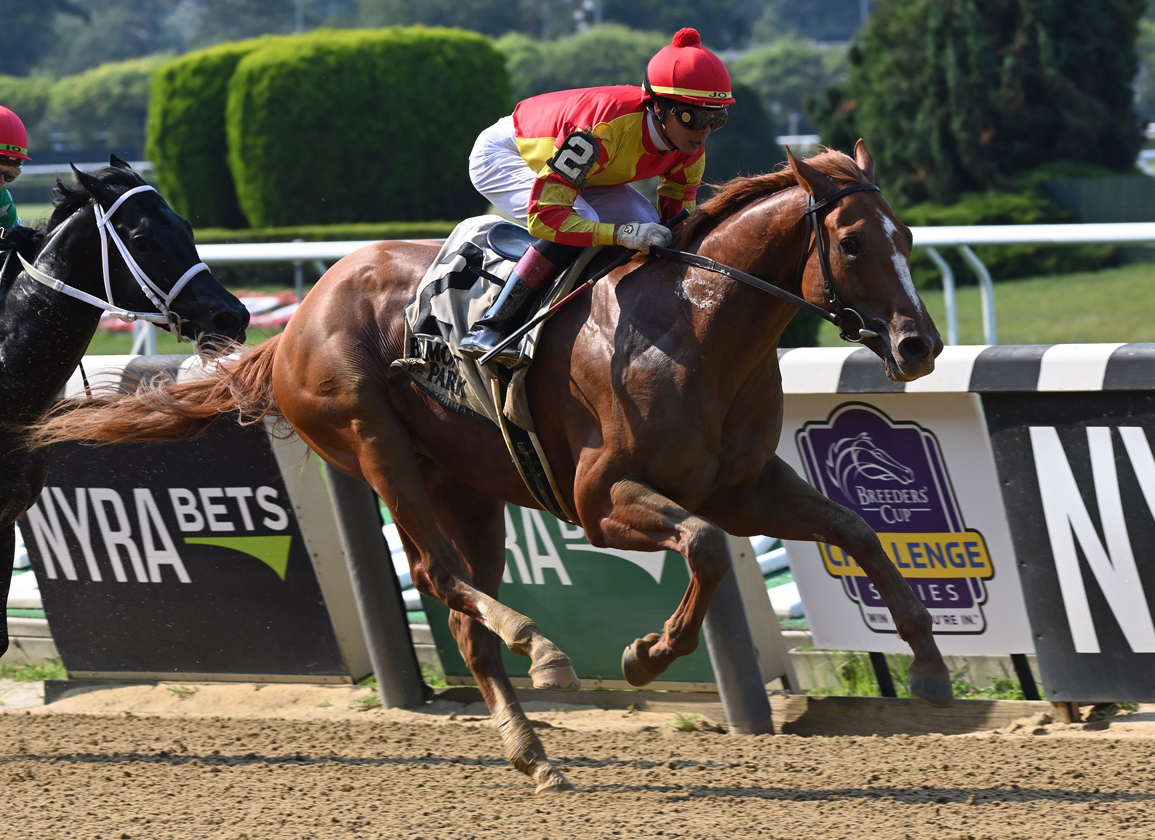 West Point Thoroughbreds, Siena Farm, Bobby Flay and Woodford Racing's First Captain (Curlin) remained unbeaten with an authoritative victory in the GIII Dwyer S. at Belmont Park Monday. Sent off the 2-5 favorite, First Captain raced at the back of the five-horse field as Ridin With Biden (Constitution) set the pace under a snug hold through an opening quarter in :23.47. The pacesetting longshot was still a length in front after a half in :46.67, but First Captain was tipped out for clear sailing at the top of the lane and loomed an ominous presence outside the tiring frontrunner. The long-striding colt took a moment to put it all together before rolling to the lead with a furlong to run and pulled away to score by 1 3/4 lengths.

“He was behind horses and took some dirt,” winning jockey Jose Ortiz said of his trip. “They were running. They went [:46.67] and when I put him in the clear, it took me awhile to get into high gear, but when he did it, he used that beautiful stride of his. He went by them as he is supposed to and he galloped out really good. I think he's going to improve with distance.”

“He's never going to be a horse that just dazzles you, but you can tell he's just starting to get going,” said Finley. “We're very happy with him. We would have loved to have got him a little farther in his third start, but it just wasn't to be. We were going back and forth to run in the [July 30 nine-furlong] Curlin S. [at Saratoga], but this spot came up and it was too attractive. Now, I guess we can go to the [July 31 GII] Jim Dandy S. or wait for the [Aug. 28 GI Runhappy] Travers S.”

First Captain, a $1.5-million Fasig-Tipton Saratoga yearling, debuted a winner going seven furlongs at Belmont Apr. 24 and was tabbed a 'TDN Rising Star' after being headed and battling back to win a one-mile allowance May 29.

His charge's progression through his first three starts has impressed trainer Shug McGaughey.

“He was a lot more steady today,” McCaughey said. “I knew he was winning his first two races on ability, but I didn't really know what to think of him. Today, he showed me something, especially that two turns is going to be in the bag, I think. I liked the way he took the dirt; he took it a lot better today than he did the last time. He was a little farther back than I thought he would be. But that's why they are what they are.”

Of a potential next start in the Jim Dandy, McGaughey said, “We'll take a look at it. I'll see how he comes back and how he is when he gets up there. That would be the best-case scenario. I'm glad to get this one.”

Breeder Bobby Flay purchased First Captain's second dam Lacadena privately after the stakes-placed mare RNA'd for $1.4 million at the 2007 Fasig-Tipton November sale. Her daughter America, who RNA'd for $725,000 at the 2012 Keeneland September sale, won the GIII Turnback the Alarm H. and was third in the GI Mother Goose S. and GI Delaware H. First Captain is her first foal. She also has an unraced 2-year-old filly named American Caviar (Curlin), a yearling colt by Uncle Mo and she produced a Curlin filly this year. America RNA'd for $3.1-million while carrying the Uncle Mo colt at the 2019 Fasig-Tipton November sale.

First Captain's third dam, Butterfly Blue (Ire), is a half-sister to broodmare of the year Better Than Honour (Deputy Minister).

First Captain is the 44th graded winner for Curlin. He is the 113th graded winner out of an A.P. Indy mare and the fourth sired by Curlin. The same cross produced last year's GI Woodward S. winner Global Campaign (Curlin).