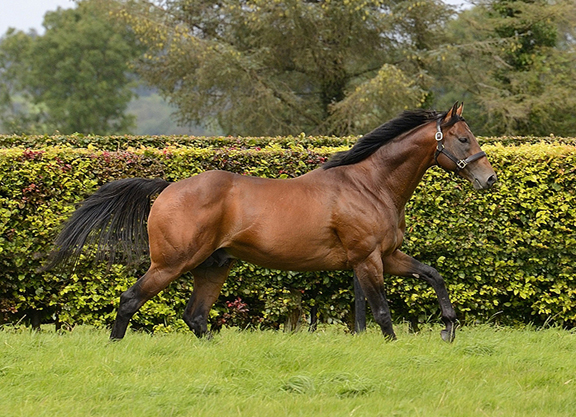 Off the mark on debut over five furlongs at Thirsk May 14, the David O'Meara-trained filly Maria Branwell (Ire) (James Garfield {Ire}–Princess Pearl {Ire}, by Teofilo {Ire}) took the next step in her stride on Thursday to capture Sandown's Listed Coral National S. Settled with two behind early by Danny Tudhope, the 3-1 shot had to chase hard after the Listed First Flier S. runner-up Crispy Cat (GB) (Ardad {Ire}) inside the final two furlongs and despite running away from the whip initially focused enough to run down that visitor close home for a neck success. “She was green and is still learning, but was up against the boys today and has taken a nice step forward,” her rider said. “She has a great attitude and is a very likeable filly. We were outpaced at halfway, but she really picked up and did her best work in the last furlong so I'm sure she'll get six.”

Rathbarry Stud's first-season sire (by Exceed and Excel {Aus}) is off to a flying start, with this being his first black-type winner from only a handful of runners.

“She was a lovely, balanced, athletic filly with a good powerful hind quarter and she had a lovely sweet temperament. Her breeders Barry and Anna, recommended her highly and well done to them.” – Joe Foley, who purchased the filly for €22,000 at Goffs Autumn Yearlings.

Maria Branwell (3/1) is a smart two-year-old and overhauls Crispy Cat in the closing stages of the Coral National Stakes at @Sandownpark for @omeararacing and Danny Tudhope pic.twitter.com/Pg8F2iC7Rt

Maria Branwell's unraced dam, whose yearling colt by Zoffany (Ire) was a prescient €40,000 purchase by Ballyphilip Stud at the Goffs November Foal Sale, is a half-sister to the listed-placed sprinter Samminder (Red Ranson) and to the dam of the Listed Prix Ceres winner Invitational (GB) (Poet's Voice {GB}). The third dam is the G1 Prix Morny heroine First Waltz (Fr) (Green Dancer).