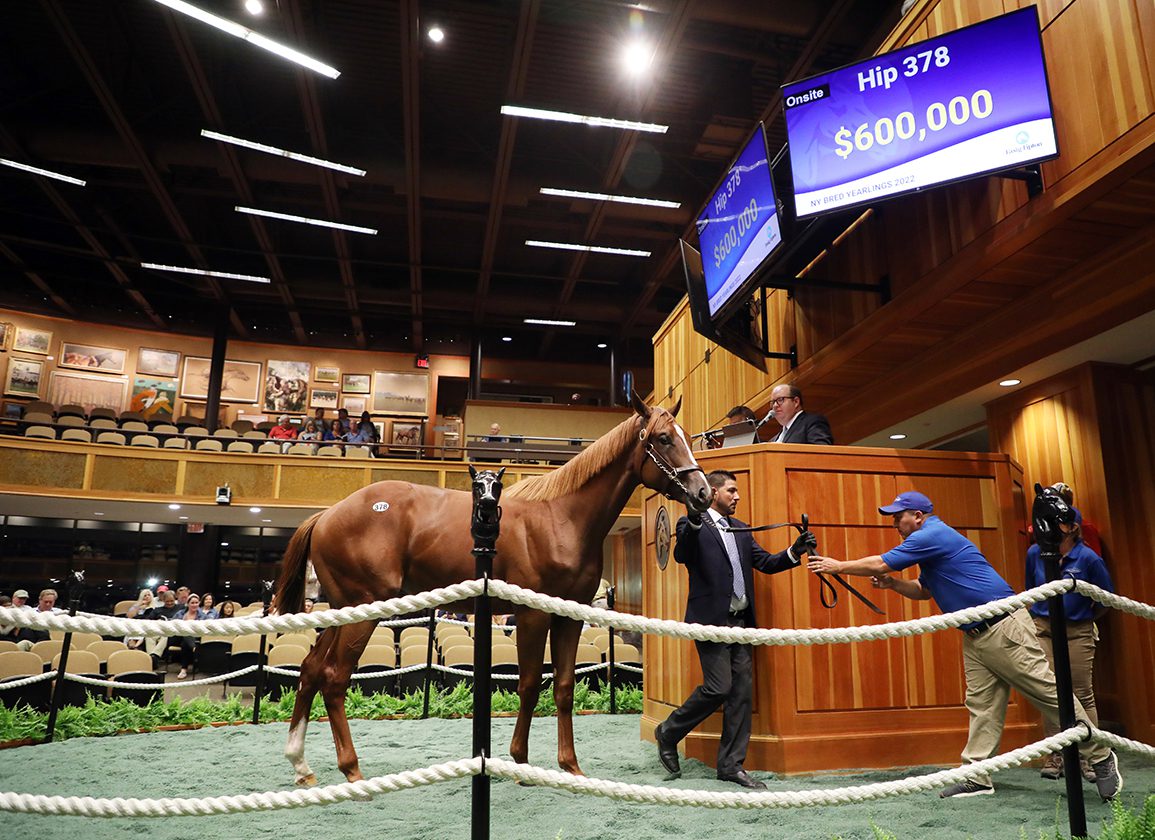 “It was an outstanding session tonight,” said Fasig-Tipton President Boyd Browning. “It was a great start to the New York-bred sale. The place was full of people and full of energy again, just like it was for the selected sale. There was broad participation across the board. There was just very, very good trade and enthusiastic bidding. It's a tribute to the quality of the program. It continues to be unquestionably the best state-bred program in the world. The quality of the program increases each year, in terms of pedigree and presentation.”

Agent Joe Hardoon made the session's highest bid of $600,000 when he acquired the colt by Hard Spun from the Perrone Sales consignment. That figure matched the highest price for a colt at the sale which was set by a Pioneerof the Nile yearling in 2018. The auction's record price was set by a filly by Malibu Moon who sold for $775,000 in 2019.

“He is a big, beautiful chestnut colt with a lot of size and leg to him,” Hardoon said. “For how big he is, he was very light on his feet. He was a beautiful mover. It looks like he will be a nice two-turn horse. He was really everything we look for in a colt and he's a New York-bred on top of that.”

Consignor Jim Perrone watched the sale of the colt from the periphery of the auction stand while a pair of grooms stood in the ring doing a celebratory dance as the yearling's price continued to escalate.

Perrone was consigning the chestnut on behalf of his breeders, Bill and Jane Moriarty's Apache Farm.

“Bill and Jane Moriarty are unbelievable horse people,” Perrone said. “They are in Camden, South Carolina, they have a little farm. Their son has a farm in New York, it's called Apache Farm North. And Jane, she does everything herself. She foals them all herself. She brings them up there, they stay up here a while and then she brings them right back to Camden. She raises them and preps them. They are great people.”

The yearling, bred in partnership with Godolphin, is out of Passe (Dixie Union) and is a half-brother to the Apache-bred multiple stakes winner and multiple Grade I placed Wonder Gal (Tiz Wonderful).

“This colt has done everything right from day one,” Perrone said. “His name at the barn was 140 because he was 140 pounds when he was born. He was a monster, this guy.”

Of expectations for Sunday's sale, Perrone said, “We kind of felt like $300,000, in that vicinity, would be really good. The kind of people we had on him, we thought he would be ok. We never expected that. It was a great night for everyone.”

Dean and Patti Reeves, who made the highest bid at the Fasig-Tipton Saratoga Fall Sale last year, were back in action at the Humphrey S. Finney Pavilion Sunday, going to $370,000 to acquire a filly by Good Magic (hip 341).

“I loved her,” Patti Reeves said after signing the ticket on the yearling. “When I saw her, I thought she looked fabulous. They had her on the short list, but I hadn't seen them at all. When I saw her, I said, 'If you're going to get one, get that one.'”

The Reeveses have recently acquired a farm in Micanopy, Florida, which is managed by Nellie and Chetley Breeden, along with Jimmy Gladwell.

“She'll go down there and get in with the rest of them,” said Dean Reeves. “We will be able to get her started early and look forward to how she stands up to the rest of the crop.”

The couple warmed up for the sale with a dominating score by their Big Invasion (Declaration of War) in the Mahony S. at the racetrack across the street Sunday. Friday evening, their colt Senbei (Candy Ride {Arg}) was named 2021 New York-bred champion 2-year-old.

“We really are enjoying the New York program,” Dean Reeves said of their focus on Empire-breds. “We have been successful in it and we're having a good time with it. The incentives of the New York program, being able to get a lot of the money back out of the horse quickly up here in New York is really a big deal for us. It helps turn the money back over for us. It is an integral part of our stable, right now, New York-breds, whether it's here or at Keeneland or at the 2-year-old sales. If they happen to be New York-breds, that's an added incentive for us.”

Hip 341 was consigned by Vinery Sales on behalf of her breeder, Lere Visagie's Rockridge Stud. She is out of graded stakes winner Majestic Heat (Unusual Heat), a full-sister to Grade I placed Mensa Heat.

Visagie acquired the mare, with this foal in utero, for $130,000 at the 2020 Keeneland November sale after she was originally led out unsold.

“I didn't have a lot of expectations,” Visagie admitted, while accepting congratulations Sunday. “I knew I needed to sell the filly and I knew she was good. Obviously, I didn't expect any of this, but now I feel so much better about buying the mare.”

Visagie, who has around 12 mares, said circumstances helped make his six-figure purchase of Majestic Heat.

“I knew she was the best mare I could afford ever,” Visagie said. “Because of the circumstances–somewhat I have to thank COVID because there were not a lot of people there to buy her.”

Sunday's sale came just a day after champion Good Magic was represented by his first graded winner when his daughter Vegas Magic upset the GII Sorrento S. at Del Mar.

“The timing on this was as good as it gets,” Visagie said. “You just sit and enjoy and savor every minute. This is my highest sale. It's life-changing.”

A colt by Bolt d'Oro (hip 314) set the early pace during the first session of the Fasig-Tipton New York-bred Yearling sale in Saratoga when selling for $355,000 to the bid of bloodstock agent Gregory Martin. Martin signed for the ticket in the name of Jay Provenzano's Flying P Stable.

“He was just a gorgeous individual,” Martin said of the yearling's appeal. “He's put together really nicely and it looks like he will develop into a really nice horse. I love the Bolt d'Oros. He is an all-around beautiful animal.”

Martin admitted the team was almost at its limit with his final price tag.

“The market, I know, is going to be strong,” Martin said. “So we knew what our budget was going to be and we stayed very close to it.”

“He was a likeable horse,” Gainesway's Brian Graves said of the colt. “That was a little bit more than I thought we would get for him. He was vetted three or four times. I guess it's just a sign of the strength of the main sale and the carryover. Bolt d'Oro is doing well.”

Graves agreed with the sentiments of many horsemen on the grounds.

“I looked around at all the horses and I would say it is a really solid group of physicals,” he said. “It's a little stronger than what I've seen here in the past. Hopefully they all sell this well.”

Blue Chip Gets on the Board

“This is the first big one that I bought as a yearling,” Grossman said. “I have bought some mares and bred and raced, but it's the first yearling that I really stepped up to buy. We want to play on the high end. I think we started there.”

Grossman continued, “We are New York breeders and we understand the value of the program. We breed quite a few Harness horses and have sold some Thoroughbreds well. We love the program, love the filly and love the team.”

The yearling is out of Reachfortheheavens (Pulpit) and is a half-sister to Grade I winner Real Solution (Kitten's Joy) and graded-placed Ava's Kitten (Kitten's Joy). She was bred and consigned by Jonathan Thorne of Thorndale Farm, who purchased the mare for $100,000 at the 2018 Keeneland November Sale.

“She probably had the best pedigree and the best physical in the sale,” Foley said. “I thought she was exceptional. It was tough to find anything wrong with her. When they walk and act like that and have a pedigree like that, it gives you a lot of confidence. Oscar Performance's start helps a lot. She's a half to a Grade I winner. But even if she didn't have that kind of pedigree, she was still exceptional just as an individual.”