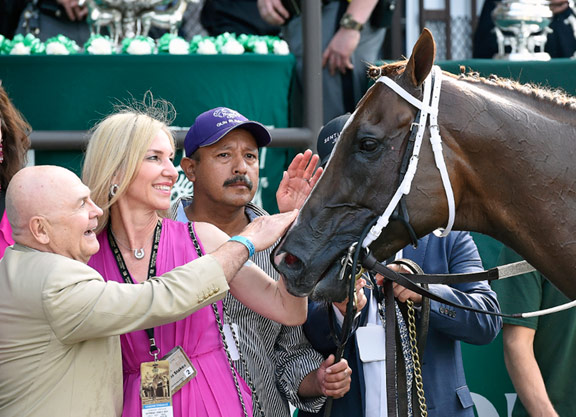 Charles Fipke's announcement that he is waiving all fees on the stallions he owns for the remainder of the 2020 breeding season has been well received by breeders. Darby Dan Farm, where Fipke stands three horses, reports that since Fipke announced his plan Monday about 50 people have called and have signed up their mares to breed to Fipke stallions.

Fipke decided to waive stud fees on his stallions as a way to help small breeders, many of whom are facing difficult economic times due to the uncertainty the coronavirus has created in the racing and breeding industries.

“I am a small breeder myself and I know it's really tough out there for the small breeder,” Fipke said. “To get a black bottom line is a dream to me. The people who breed to my stallions are small breeders and I like to help them because they have helped me. It's a team effort.”

Fipke said he had no idea what to expect when making his announcement.

“I had no idea but I understood that small breeders needed help,” he said. “Everything has been stripped from us right now and it is really tough. I wanted to pitch in and help. I hope some of those small breeders get Group I winners out of this.”

Darby Dan has received several messages from breeders expressing their thanks to Fipke.

“I think that the opportunity that Mr. Fipke is sharing is amazing given the tough time folks in the breeding business are having,” Dominic DeBellis wrote in an email. “We have no place to sell, or race or even go celebrate. This gesture was kindness that is rarely seen in this industry, especially to the little guy.”

Lance Dyer wrote in an email to Darby Dan: “When I saw the kind gesture from Mr. Fipke, I was completely blown away. I am so grateful for the offer and will graciously accept it. With so much recent negative press about Thoroughbred racing, I am happy to know that there are more wonderful kind people associated with the sport.”

Norton said he wasn't surprised that Bee Jersey was attracting the most attention among breeders looking to take advantage of Fipke's offer.

“He is a good-looking horse in his second year, and is a Met Mile winner,” he said. “If he had announced this a month ago when things were just getting started, this horse would have easily done 100 to 120 mares.”

At Daehling Ranch in California, where Fipke stands Jersey Town, the phone is ringing again.

“When all the stay at home orders came down, the phone literally stopped ringing,” said Farm Manager Julia Daehling-Oldham. “As soon as he announced this we got four or five phone calls right away. Everybody said they heard about the free breeding and wanted to get more information. In February, we weren't busy. In March, things completely stopped. A lot of people were going to skip this year because of the uncertain times. If you're not sure what's going to happen with your job at least now you know you don't have to come up with that stud fee.”

Fipke has two stallions, Danish Dynaformer and Perfect Timber, at Colebrook Farms in Ontario. They also reported an increase in interest in the Fipke stallions.

“The small breeders in Ontario are ecstatic about this and we have gotten a very good response,” said Colebrook's Nancy Wheatley, who was not able to give an estimate as to how many breeders have come on board since Fipke's announcement. “People are very receptive and are grateful.”

Wheatley said stallion owner Ben Hutzel has also decided to let people breed to his stallion, Passion For Action, which stands at Colebrook, for free. His stud fee was $3,000.

“We think this is a great thing and we have gotten a lot of positive responses,” Berryhill said. “People really appreciate it, especially the smaller breeders, and we have had quite a few calls. With tracks not open, people don't know what to do. Things had stagnated for us. We had quite a few people who asked for contracts not send them back. With Forever d'Oro being available for free, this is getting people interested again.”