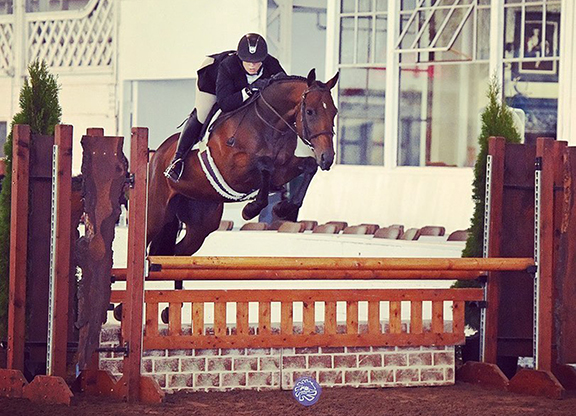 King's Vision was born and raised at Lane's End Farm and is a full brother to Breeders' Cup Turf Mile winner Court Vision, who won over $3 million on the track. His dam is a full-sister to Preakness winner Summer Squall, and a half-sister to champion A.P. Indy. At Fasig-Tipton's Saratoga sale, King's Vision brought $330,000. Lucinda Finley, who now owns him, said she understood why.

“He has a royal pedigree and his conformation is impeccable. He is really balanced,” said Finley, an attorney, and professor at SUNY's University at Buffalo Law School, and the sister of TDN columnist Bill Finley.

Finley, a graduate of Barnard and Columbia Law School is a racing fan and Thoroughbred pedigree wonk and has ridden off-track Thoroughbreds her whole life. She was part of the team that founded Finger Lakes Finest Thoroughbreds (FLF), an all-volunteer non-profit organization based at Finger Lakes Racetrack. FLF has a business model similar to Canter. Trainers and owners list their racehorses for sale for second careers, and FLF posts them on its website and Facebook page and networks with potential new homes and shows interested buyers around the track to help them find the right horse. FLF is one of two programs at the upstate New York racetrack. The other program, Finger Lakes Thoroughbred Adoption Program, operates out of the Purple Haze Center and it is funded in most part by Finger Lakes Racetrack. But it only has 16 stalls and often there is a waiting list for a spot. There is no fee to list a horse with FLF, which is funded by donations, and given the economics of racing at Finger Lakes, the sale price is important to the trainers.

“Through Finger Lakes Finest, we place 200 or more horses a year,” said Finley. “It is the perfect program to complement the good work of Finger Lakes Thoroughbred Adoption Program.”

Finley sees the trend at Finger Lakes going in the right direction with more horses being retired when sound.

“With the success of the NYTHA's Take2 program, The Jockey Club's Thoroughbred Incentive Program (TIP) and the Retired Racehorse Project's Thoroughbred Makeover, the value of a sound Thoroughbred has gone significantly up,” said Finley. “More horsemen seem to be honestly looking at viability on the racetrack versus a shot as a second career and decided to list horses for sale with FLF to retire them.”

“The end-of-the-meet deluge of horses we are asked to list is still a big challenge,” said Finley. “I wish there could be more forethought by trainers and owners about planning for retirement and not waiting until the last minute.”

Because of his pedigree, Finley took notice of King's Vision while he was racing at Finger Lakes. Often, at the end of the meet, there are still a number of horses sold to race in Puerto Rico. In 2014, King's Vision, who was still sound and clean-legged, was likely to be on that list. The assistant trainer in his barn had second thoughts and decided to list him with FLF just in case he could be sold in the U.S. They priced him at  about what he would have brought in Puerto Rico.

“I had been interested in his pedigree already and even though the last thing I needed was another horse, he really stood out to me as a show hunter prospect,” said Finley. “He is only 15.3 hands and plain bay, which most people don't want but I am happy with both of those things. In addition to good conformation, he had a lovely, springy balanced trot. So, I made an offer and they took it.”

Since joining the Finley family, King's Vision's career as a show horse has taken off. He jumps a course with textbook perfection. Most recently, before the pandemic shut down the show rings, he was Champion at the World Equestrian Center in Ohio in the Take 2 Thoroughbred Hunters. King's Vision has won numerous championships and has even placed above acclaimed Warmbloods in A-rated sanctioned shows since his first year on the circuit at age six. (Watch King's Vision in the 2018 Buffalo International.)

“He has won or placed among the best in his divisions whether in New York, Pennsylvania, Ohio, and at the Kentucky Horse Park at the World Equestrian Center,” said Finley. “He was a terrific jumper from the first time he tried it. He loves it.”

“He is a playful character, full of attitude who nudges for attention, and since his dam died from complications foaling him, I always wondered if he was bottle fed as a baby,” said Finley. “He has his quirks. He can be cranky in the schooling area, but he knows when it's show time and is laser-focused in the show ring no matter where we take him.”

Since his impressive start to the 2020 season, King's Vision has been at home riding out the pandemic. But Finley isn't giving up on a successful year.

“It is good to have goals at a time like this,” said Finley. “Although my boarding barn is not allowing owners to come ride right now with New York facing such a crisis, I have kept King in professional training with Jaime Bates, the daughter of the barn owner, who is fabulous and loves him. Depending on what happens with the 2020 season, my goal is to try to qualify for and win the Take2 League $10,000 hunter championship in September.”

“He was bred to be a star on the racetrack and that didn't work out but he ​is fulfilling that dream in the show ring.”