Final Haskell Works for King for a Day & Joevia 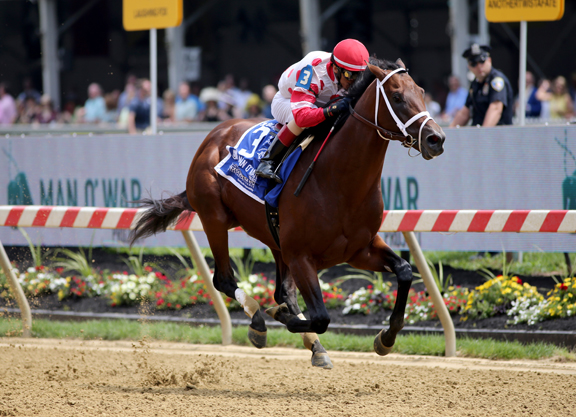 King for a Day (near) | Sarah K Andrew

With the GI TVG.com Haskell Invitational S. looming July 20, GI Belmont S. third-place finisher Joevia (Shanghai Bobby) and TVG.com Pegasus S. winner King for a Day (Uncle Mo) put in their final works Saturday morning for the big event, which is worth $1 million and will be held for the 52nd time at New Jersey’s Monmouth Park.

Joevia, who is already on the Monmouth grounds, worked with fellow Greg Sacco runner Bal Bay Drive (First Samurai). Sacco said he went five furlongs in in :58.2 with Hector Diaz, Jr. aboard.

“He worked super,” said Sacco. “That was what we were looking for. We know he’s a nice colt. We wanted to go for it today. I didn’t want to pussyfoot into the Haskell. He did it well within himself.”

Meanwhile, King for a Day is at Saratoga and went five panels in 1:01 with John Velazquez in the saddle. His work took place over the Oklahoma training track for trainer Todd Pletcher. He worked in tandem with Just Right (Into Mischief), who is pointing to the Finger Lakes Derby.

“It was a maintenance work, but he was in the bridle strong,” said Red Oak Stable racing manager Rick Sacco, “and [Velazquez] never moved on him.”

Eight contenders are pointing to the Haskell. In addition to Joevia, King for a Day, and Maximum Security (New Year’s Day), who is expected to register his final work on Monday, the other probables are Mucho Gusto (Mucho Macho Man), Everfast (Take Charge Indy), Spun to Run (Hard Spun), Chilly in Charge (Take Charge Indy), and Bethlehem Road (Quality Road).