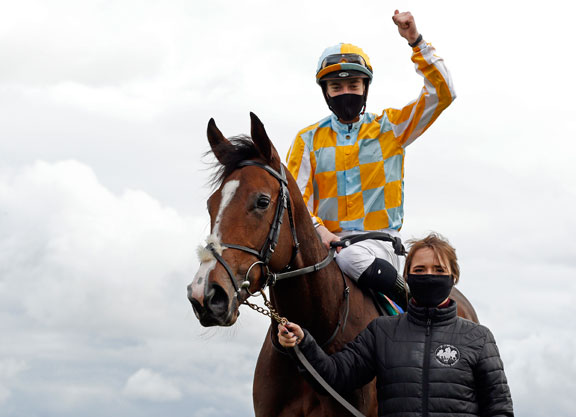 Friday's G1 bet365 Fillies' Mile at Newmarket was fought out by two elite TDN Rising Stars, with Pretty Gorgeous (Fr) (Lawman {Fr}) prevailing by half a length over Indigo Girl (GB) (Dubawi {Ire}) to claim the bragging rights. Runner-up in the Sept. 13 G1 Moyglare Stud S. at The Curragh, John Oxley's Pretty Gorgeous had been forced to miss Sunday's G1 Prix Marcel Boussac due to the well-documented feed contamination but confidence remained intact as she traded as the 5-2 favourite. Racing well off the honest tempo as Shane Crosse played the waiting game, the bay who had earlier won the G2 Debutante S. cruised into contention two out and was in front soon after chased by a Ballydoyle runner which was at the time believed to be the 50-1 shot Snowfall (Jpn) (Deep Impact {Jpn}). Able to see off that Rosegreen representative with relative comfort, she was beyond reach as George Strawbridge's G2 May Hill S. winner Indigo Girl closed late on. It later transpired that the eventual third, who was the same margin behind, was in fact Mother Earth (Ire) (Zoffany {Ire}) and not Snowfall with the number cloths having been mixed up. “Early on, I wasn't overly happy and she's so big she didn't come down the hill all that great but once I got her balanced and rolling in the last half-furlong it was a case of me getting there too soon,” commented Crosse, who had missed out on G1 St Leger glory last month after a positive COVID-19 test.

Pretty Gorgeous was a rare Rising Star to run at the low-key Irish venue of Bellewstown, but the promise of her five-length defeat of the useful Talacre (Flintshire {GB}) over this trip was there for all to see July 2. Runner-up to Donnacha's Shale (Ire) (Galileo {Ire}) in the G3 Silver Flash S. over the first of three seven-furlong outings when the going was lively at Leopardstown Aug. 6, she turned that form around with ease in the ground when scoring by 2 1/2 lengths in the Debutante at The Curragh Aug. 22 before again coming off second-best to Shale in the Moyglare. “She was very impressive and I'm delighted for everybody at home, for Mr Oxley who was keen to come here and for Justin who bought her,” trainer Joseph O'Brien said. “I thought Shane gave the filly a great ride. He was patient on her and committed when he had to. Shane is a young man, but he is a very good rider–strong and cool in a finish and he doesn't panic.”

“I was a little bit worried coming here, given that she'd been to France but she was very fresh and in great shape so we thought we'd better take our chance,” he added. “From the first day she worked, she was impressive at home and proved today that she is top-class. The Breeders' Cup is an option, but it's more likely she'll be put away now and trained for a Guineas next Spring. She is a Lawman, so she would not be bred to go very far. I think Lawman's can get 10 furlongs and I see her more as an eight to 10-furlong filly rather than an Oaks-type filly at this stage.”

John Gosden said of the runner-up, “It was a great run and I'm very happy with her. Her mother won the French St Leger and her sister won a group one over a mile and a half. She will be trained more for a mile and a quarter and middle-distance races. She won't be trained as a Guineas filly.”

Aidan O'Brien explained the mix-up with his fillies later in the afternoon, telling the Racing Post, “I didn't see the race live and when I looked at the replay after it was brought to my attention, I could see straight away. I contacted the BHA straight away and let them know what is after happening. We have a team based in England these days because of the coronavirus restrictions, so the problem is the lads that are with the horses at home can't always go racing with them. I don't know what to say other than I am so sorry that it happened.”