Fielding Proves Both Lucky and Good 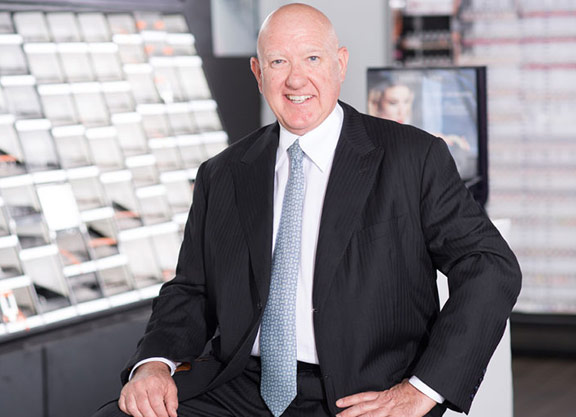 SARATOGA SPRINGS, N.Y.–John Fielding has been a force to be reckoned with on the harness racing circuit for decades, owning some of the best in the industry such as Pinkman, Father Patrick, Shake It Cerry, Maven and this year's Hambletonian Oaks winner Manchego. One fateful day in the late nineties, Fielding met Standardbred and Thoroughbred breeder Fred Hertrich at a Standardbred sale at Woodbine and the rest, as they say, is history.

“He and I, as he always likes to say, were sharing a Lebatt Blue, sitting on a bale of straw and shooting the breeze,” Fielding recalled. “We became friends very, very quickly and have become best friends over the years. We have never had a disagreement as partners. He is one of the smartest men I have ever met in my life, bar none.”

Together, they have bred some great Thoroughbreds, such as MG1SW sire Shamardal, and the duo have had a particularly eventful Saratoga meet. Fielding and Hertrich bred their first GI Whitney S. winner in Diversify (Bellamy Road); Rushing Fall (More Than Ready) captured the GII Lake Placid S.; and Saturday they hope to be able to say they have bred a GI Travers S. victor should Catholic Boy (More Than Ready) cross the wire first.

“I had the two big Standardbred wins [in the Hambletonian Oaks and Peter Houghton Memorial] and the Whitney in one day [Aug. 4],” Fielding said. “Then Rushing Fall won last week, which was great, and now hopefully we have a good result with Catholic Boy Saturday.”

Fielding was introduced to harness racing by his father and owned his first Standardbred at just 16. It was Hertrich that introduced him to the world of Thoroughbred breeding.

“I've been going [to Thoroughbred races] since I was a kid and always loved it,” Fielding said. “Fred and I bought our first mare with the late [Dr.] Phil McCarthy, who was a great friend of Fred's and mine. We were also partners with the Taylor boys [of Taylor Made farm] in that first mare. That was in 1998 or '99 and we have been partners ever since. Fred does have some mares on his own, but most of them we have in partnership.”

The pair now have 100 mares together at Hertrich's Watercress Farm in Kentucky.

“Our partnership in the horses is kind of unique. As [Fred] likes to say, he is in charge of handling all of the details and, I would say, between him and Rob Tribbett, almost all of the work,” Fielding said. “I pitch in where I can, but he says I'm mainly there for the luck because I'm very lucky.”

The Toronto resident added, “I am very lucky to have Fred as a partner. He is just a super guy, integrity driven and just a really good person. Rob works exhaustively for Fred doing all the pedigree stuff. He also runs the Standardbred operation, so he is a busy guy.”

In addition to foaling mares at Watercress, Fielding and his partner also drop some foals in New York to take advantage of the state's incentive program. One example of that is their new Empire-bred Whitney winner Diversify, who won last year's GI Jockey Club Gold Cup and romped in the GII Suburban H. prior to his Saratoga score.

“He has been really devastating in his last couple of starts, so I am excited to see where he will go next,” Fielding said. “I think it is really, really great for the New York breeding program as well, so that's good. We are more and more involved in the New York program as we go forward. We are starting to drop a few in Canada as well, so they are Ontario-bred.”

The founder of Array, the world's largest manufacturer of cosmetic advertising, continued, “I've been on the board at Woodbine entertainment since 2004. I've always had some Ontario-bred or sired horses with breeder Dave Anderson, who is a good friend of mine and Fred's, and trainer Catherine Day-Phillips. We have started dropping some foals here and the Ontario-bred racing program is fantastic.”

Fielding and Hertrich have enjoyed plenty of success at the sales, as well. In 2004, they sold Shamardal's dam Helsinki (GB) for $3.9 million in foal to Cherokee Run and sold her weanling filly by Unbridled's Song for $1.9 million. More recently, the friends sold a Medaglia d'Oro colt out of the well-bred Poof Too (Distorted Humor)–now named Big Muddy–to Todd Pletcher for $850,000 at the 2015 Keeneland September.

“We are a commercial breeders, so we try to sell most everything,” Fielding said. “We are selling around 54 yearlings at Keeneland this year and we will sell some later developing yearlings in October. Sometimes we will keep a filly from a family we want to continue or if a horse fails to meet its reserve, we might race it ourselves. We have a horse racing [Thursday] actually out of a mare that died giving birth this year. The horse is named Grandma's Favorite (Denman {Aus}) and is in the last race at Saratoga.”

Fielding and his longtime partner only have about six horses in training currently, but are planning on expanding that side of their business going forward.

“I think Fred has the same yearn [to race more],” Fielding said. “I think as we go along here, we will get more involved in the racing side. It is gratifying to breed champions, but owning a stallion is the ultimate goal. As you get older, I think you want to chase that other dream to win a Breeders' Cup or Kentucky Derby as an owner. Commercially, to own a stallion like Justify or American Pharoah would be the ultimate dream.”

Fielding has won 21 Breeders' Crown races, which are the Standardbred equivalent of the Breeders' Cup, and he and Hertrich, who is the Breeders' Cup Chairman, scored their first win as breeders in the Thoroughbred World Championships last year when 'TDN Rising Star' Rushing Fall won the GI Breeders' Cup Juvenile Fillies Turf.

“I think the key is to breed a really good horse to win the Breeders' Cup,” Fielding said. “We had our first last year with Rushing Fall and Catholic Boy ran great. He finished fourth [in the GI Breeders Cup Juvenile Turf].”

Winner of the GIII Saranac S. on the Saratoga lawn last year, Catholic Boy successfully switched to the dirt last fall, romping in the GII Remsen S. Getting back on the turf this summer, he won the GIII Pennine Ridge S. June 2 and followed suit with a win in the GI Belmont Derby July 7.

“I am very excited for this weekend,” Fielding said. “That would be our first Travers winner. He is already a Grade I winner on turf and not many horses are Grade I winners on both surfaces.”

He continued, “We got our first Whitney winner and I think Rushing Fall is headed to a Grade I next. Then we have to see what 2-year-olds pop up and what is headed to the Breeders' Cup.”

It takes more than luck to have the kind of racing success Fielding has had with both Standardbreds and Thoroughbreds. With his business savvy and his shrewd partner, it is likely that this recent string of top-level victories is a sign of even bigger things to come for Fielding and Hertrich.