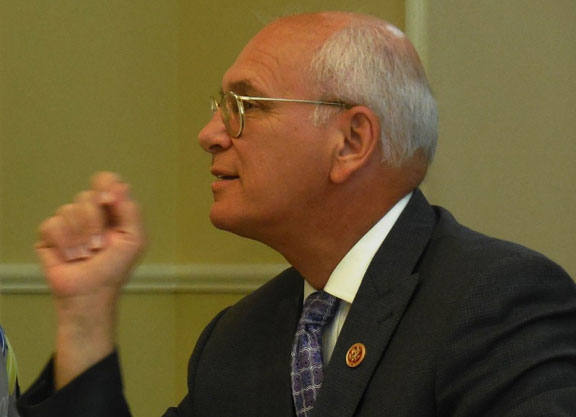 The bill, which is awaiting the assignation of a United States House of Representatives number, expands upon draft legislation originally proposed by Congressman Paul Tonko (D-NY) in May.

The revised version introduced by Congressman Andy Barr (R-KY) includes new language that has been tweaked by input from industry stakeholders over the last six weeks, including clarifications and assurances the bill will not “modify or eliminate any of the consents, approvals, or agreements required by the Interstate Horse Racing Act (IHA) of 1978” or impair or restrict existing state laws, with the exception of regulations that specifically pertain to anti-doping.

At first read, the Thoroughbred Horseracing Integrity Act appears sweeping in scope, with the potential to initiate a massive paradigm shift within an industry that has made great strides–but has not completely come to grips with–problems related to doping and therapeutic medication abuse over the past decade.

Adding to its institutional heft, the bill has the backing of the Coalition for Horse Racing Integrity (www.horseracingintegrity.com), which includes The Jockey Club, Breeders' Cup Ltd., the Water, Hay, Oats Alliance, and The Humane Society, among other organizations.

But–as with any wide-ranging federal initiative subjected to closer scrutiny–the bill has some daunting obstacles to overcome. Chief among them are an ambitious start date for implementation (Jan. 1, 2017) and the question of whether states' rights are being trumped by federal oversight.

And overall, the true “elephant in the room” remains funding, which is addressed only obliquely in the bill's language.

“Loans” and “donations” from unspecified sources would be required to kickstart the new authority, and a sliding fee scale based on a state's number of starters would be collected monthly from each state thereafter. No federal dollars are earmarked for the anti-doping oversight program, and states are specifically forbidden from passing along costs to bettors in the form of takeout increases.

“We refuse to accept the notion that horse racing faces a future of inevitable decline,” said Barr at the House Triangle press conference for the bill's introduction. “Our vision for the Thoroughbred industry and this sport we love is that a new golden era of horse racing is not only possible, but that it is readily achievable with reform that tears down the [barriers] and that unites the sport under a national uniform set of medication rules and procedures. We envision the most prosperous, popular, and competitive Thoroughbred industry on the planet.”

Tonko concurred when it was his turn at the podium: “No mistaking, the focal point and the epicenter of this industry is the athlete. The beautiful, magical, strong animals called equine athletes are the focus of this legislation. They deserve and they require our respect.”

The bill would create an entity called the Thoroughbred Horseracing Anti-Doping Authority (THADA).

Its oversight board would be comprised of the USADA chief executive, five USADA board members, and five at-large directors appointed by USADA from nominees presented by the Thoroughbred industry.

THADA would be charged with coming up with lists of banned substances and practices, in- and out-of-competition testing protocols, penalties for violators, a network of accredited testing labs, and a regulatory framework to enforce, adjudicate, and hear appeals related to the new federal rules.

States would, in effect, be forced to comply with the uniform adoption of the new national anti-doping standards, because the penalty for failing to do so would be steep: the revocation of federal permission to participate in interstate simulcasting, as governed by the IHA.

“My view is it is a privilege to participate in interstate commerce,” Barr told TDN in a phone interview after the bill was announced. “And as part of that privilege, each jurisdiction has the opportunity to operate under a single uniform set of rules that eliminates a lot of the confusion and inconsistencies that impede interstate commerce.

The National Horsemen's Benevolent and Protective Association (HBPA) issued a brief statement that read “we are opposed to any form of legislation that interferes with the Interstate Horseracing Act of 1978.” The organization added that it wanted to study the legislation in greater detail before offering a more comprehensive position on it.

THADA officials, according to the bill, would have the same authority as state racing commission officials do to investigate and test for doping and therapeutic medication violations on commission-regulated properties. But the language of the bill specifically states that THADA's powers end there, and do not include any investigations into criminal conduct or other wrongdoings that a state commission might police on its own.

“The independence here is what will make this work and function,” Tonko said.

THADA's powers are also not retroactive, meaning that no alleged doping prior to Jan. 1, 2017, will be subject to its authority.

THADA would be required to submit a comprehensive report on its effectiveness and efficiency to Congress on the third year after it becomes operational, and then every four years after that.

The bill does allow for some leeway and inclusion for state racing commissions to either take on some aspects of the new testing or to work in concert with THADA authorities in their states.

Under a “Duty of Cooperation” section of the legislation, THADA may determine that if states demonstrate regulatory competency, “a particular state racing commission will be able to implement a component of the Thoroughbred horse racing anti-doping program in accordance with the standards and requirements established” by THADA.

“In other words, there's an opportunity for state racing authorities to maintain their control over the medication issues if they desire, but they obviously have to be implementing the national uniform program,” Barr said.

The Association of Racing Commissioners International (ARCI) wouldn't be happy with such an arrangement. Nor does it support of the bill as a whole, according to ARCI president Ed Martin.

“The ARCI is unanimous in its opposition to shielding racing regulatory authority from public accountability by putting it in the hands of a private organization,” Martin said. “We also note that the proposal provides absolutely no federal resources and not one cent of existing federal anti-doping monies to assist in chasing those who would dope horses…Equine welfare and medication policy should not be put in the hands of an entity with no experience with such matters and no veterinarian involvement. We strongly oppose the politicization of racing medication policies and are concerned that equine welfare policies will be trampled should this be enacted.”

Charges of politicization aside, timing and funding remain the two most obvious impediments to passage.

Delving deeper into the bill's language, even though Jan. 1, 2017 is listed as the act's effective date, other aspects to the reform package–such as coming up with prohibited substances lists, the outline of results management and disciplinary processes, and lab accreditations–are supposed to be in place 120 days prior to the effective date, making roughly Sept. 1, 2016, the de facto deadline.

Given the torpor that often accompanies both the federal legislative process and the glacial pace of change in the U.S. racing industry, how will this looming deadline be met?

“Obviously, we've constructed the bill for the purposes of this session of Congress,” Barr said. “That's why the date is what the date it is. We intend to work towards that goal. But if it takes longer, then obviously we can make modifications on the effective date. That's not a real big issue.”

When queried about funding, Barr would not offer a ballpark estimate as to what THADA's annual operating budget might be (other industry officials have previously given TDN guesses that rage between $22 and $60 million). And when asked to give examples of which organizations or individuals would be likely to provide the loans and donations mentioned in his bill, Barr said, “I would direct that question to the Coalition [for Horse Racing Integrity], given the fact that provision is obviously directed to the private sector.”

The bill's funding formula states that THADA “shall be paid entirely by the Thoroughbred horse racing industry.” It outlines a basic formula whereby a per-starter fee would be determined nationally, then individual state racing commissions would be billed on the 20th of each month according to the number of horses that start in each jurisdiction.

Barr underscored that states would be left to their own devices to figure out how they would make these payments, so long as the money does not come from betting takeout increases. “The bill is not prescriptive in terms of how the state would remit their share to [THADA],” he said.

But what would stop a state from paying its THADA obligation from one line item on the state budget and then raising takeout allegedly earmarked for some separate line item to make up for the shortfall?

“The intent of the legislation is to not in any way disturb the takeout,” Barr said. “So if there's any effort to circumvent or undermine that…we would want to look at that.”

One other quirk stands out in the bill–in an attempt to keep racing industry appointees with perceived conflicts of interest off the THADA board, the language specifically states that no appointee shall be “(1) an individual who has a financial interest in or provides goods or services to covered horses; (2) an official, officer, or serve in any governance or policymaking capacity for any Thoroughbred industry representative; or (3) an employee or have a business or commercial relationship with any of the individuals or organizations described in paragraphs (1) or (2).”

That clause would seem to exclude a wide swath of otherwise-capable industry participants–breeders, owners, trainers, racing officials, track executives and the board members of racing's numerous organizations and trade industry groups–from being appointed to a THADA oversight position.

Barr disagreed, explaining that “plenty of people” would still be eligible to serve, such as “heads of associations, or people retired from the industry.”

Barr said he was cognizant that such details will need to be smoothed out as the bill moves through hearings and gets modified. And at this early stage in the bill's lifespan, he has no shortage of institutional support behind him to help that happen.

“It is immensely gratifying to see the results of earnest collaboration among such a broad range of stakeholders,” said Craig Fravel, president and chief executive officer of the Breeders' Cup Ltd. “This bill is designed to bring long-needed reforms to the medication rules in Thoroughbred racing and provide a new level of certainty and trust for our participants and fans.”

Wayne Pacelle, president and chief executive officer of the Humane Society of the United States, also voiced his organization's backing of the bill.

“The horse racing industry needs a makeover,” Pacelle said. “And this bill has the potential to deliver a new regulatory framework with a science-based program and provide better protection for all of the athletes involved.”