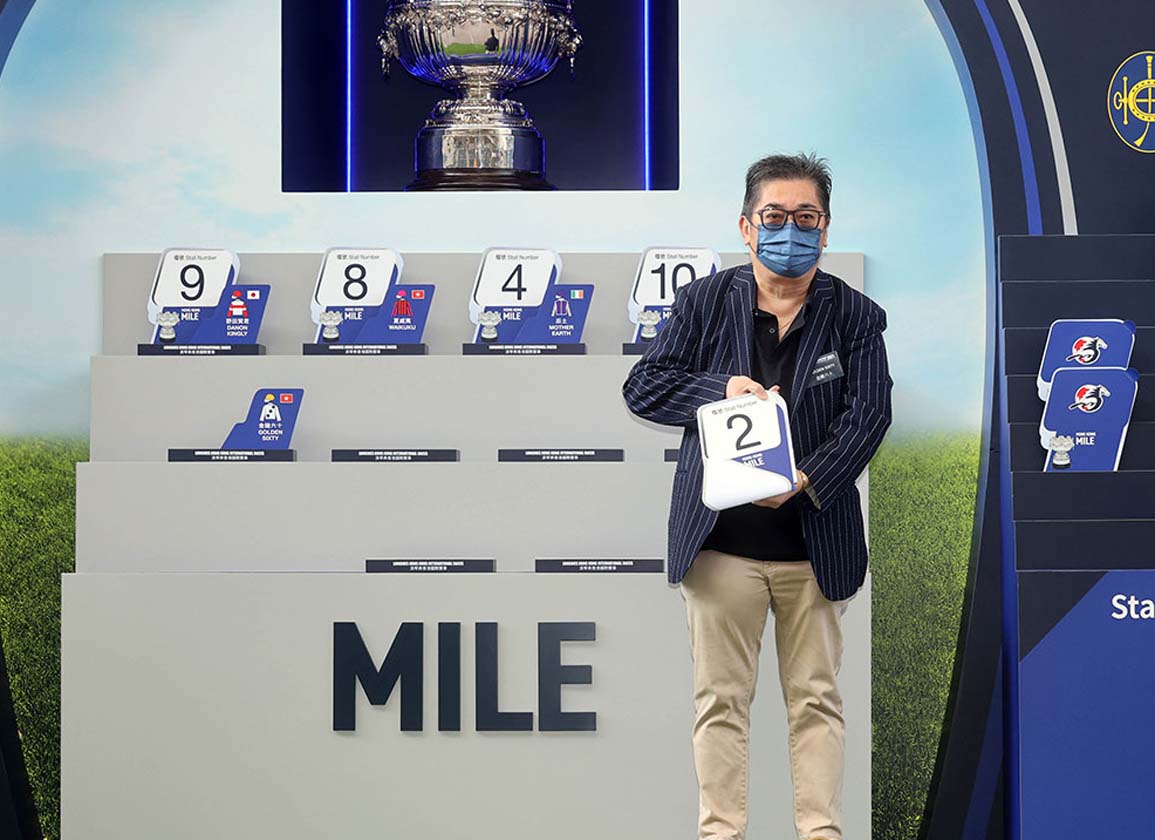 A total of 43 horses representing Hong Kong, England, Ireland, France and Japan were entered for Sunday's HK$100 million Longines Hong Kong International Meeting at Sha Tin Racecourse, and the luck of the barrier draw–held Thursday morning in the parade ride at the track–was much in favour of the horses that are anticipated to be at the head of the markets in the four events.

For a horse like reigning Hong Kong Horse of the Year Golden Sixty (Aus) (Medaglia d'Oro), who likes to get back and then put his rivals to the sword with a devastating finish, the barrier draw is something of a non-issue. Having drawn seven last year en route to a facile success, his chances were done no harm whatsoever when owner Stanley Chan selected gate two for Sunday's G1 Longines Hong Kong Mile.

“Barrier two is OK–we'll just relax him and wait for the straight, and then we can just let him go,” trainer Francis Lui told the HKJC's Declan Schuster. “He is all ready and we're hoping that luck will come to my team and my owner–and to me too.”

Similarly, with the gates positioned towards the top of the Sha Tin straight for the G1 Longines Hong Kong Vase (2400m) and with a long run into the first turn, post positions–especially in a compact field–also become less relevant. Defending champion Mogul (Ire) (Galileo {Ire}) will have no excuses from gate two, one to the outside of one of the likely pacesetters Reliable Team (NZ) (Reliable Man {GB}), while G1 Coral Coronation Cup hero Pyledriver (GB) (Harbour Watch {Ire}) begins outside that pair in stall three.

Japan's record-making Loves Only You (Jpn) (Deep Impact {Jpn}) and Lei Papale (Jpn) (Deep Impact {Jpn}) figure to be strong in the market for the day's richest event, the HK$30 million G1 Longines Hong Kong Cup (2000m). Having drawn four and three, respectively, neither should have much difficulty securing a trip that suits their running styles. The form of the G1 QIPCO Champion S. is represented by Dubai Honour (Ire) (Pride of Dubai {Aus}, gate seven), beaten 3/4 of a length in back of Sealiway (Fr) (Galiway {GB}) and 1 1/2 lengths ahead of Mac Swiney (Ire) (New Approach {Ire}) in third. The latter was assigned post position two, while local hope Panfield (Chi) (Lookin At Lucky) has pole position coming off a disappointing effort in the G2 Jockey Club Cup three weeks ago.

“It's a lovely draw, it gives you options and we're certainly very happy with it, there's a lot worse draws than that–I couldn't be happier,” trainer Tony Millard said of last year's G1 Champions & Chater Cup hero, also a multiple Group 1 winner in his native Chile. “He's been good since that last run, frankly speaking that last run, it was one of those races that you want to forget and we're just looking forward.”

Pixie Knight (Jpn) (Maurice {Jpn}) could go favoured in a wide-open renewal of the G1 Longines Hong Kong Sprint, and will break from post position eight to try to make it two in a row for Japan. Defending champion Danon Smash (Jpn) (Lord Kanaloa {Jpn}) doesn't appear to be in the same sort of form and will leave gate 10 after winning from the riverside draw in 14 last year. Wellington (Aus) (All Too Hard {Aus}) has a chance to go a good race second-up, having finished seventh to Lucky Patch (NZ) (El Roca {Aus}) in the G2 Jockey Club Sprint Nov. 21, but he will have to work out a trip of his own from stall 11.

“In the Sprint you want some draw assistance and we didn't get the draw assistance, but last year's winner was drawn 14 and if [Wellington] is good enough, that's where he comes from,” trainer Richard Gibson told the HKJC's Leo Schlink. “I think he's sharper than he was [last time] and he trialled really well the other day, so he's in good shape.”