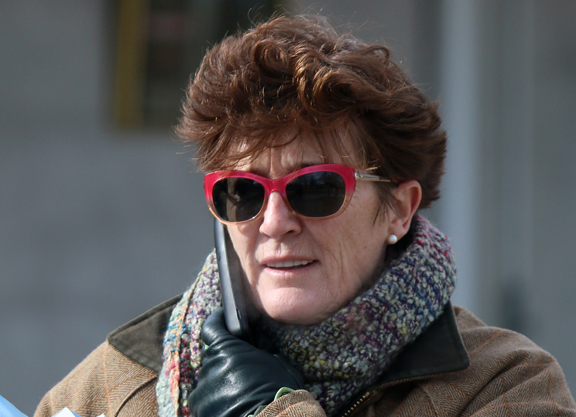 Favorite: My all-ime favorite was Triptych (Riverman). She was nicknamed the “Iron Lady” like Maggie Thatcher, the first female Prime Minister of the U.K. (and the longest serving). She won 14 times. She frequently took her game to the boys, by accelerating from a position of power close to the pace, and was relentless all the way to the line.

Triptych won the G1 Prix Marcel Boussac as a 2-year-old and ran in every major race as a 3-year-old. I was at The Curragh when she won the Irish 2,000 Guineas, dominating her male counterparts. My eyes were like saucers. She was big, dark and powerful, with a gorgeous star on her forehead. There are fun memories of us all celebrating the day in The Silken Thomas in Kildare. When it was time to officially close up, the blinds went down and the barman left us to serve ourselves and leave what money we owed on the counter. The good old days!

As a 4-year-old with Patrick Biancone, she won her first G1 Champion S. at Newmarket. But it was as a 5-year-old when she won five Group 1 races (including her second G1 Champion S.) that she really strutted her stuff, with that signature high head carriage and her rather feisty, engaging yet persnickety character. I followed her every move.

In the Irish Champion S. at Phoenix Park on that sunny September evening in 1987 (we got a speeding ticket getting there), I was struck by her intense focus in the parade ring. Being an athlete myself, I recognized how she channeled herself. I truly learned that day about horses getting “in the zone”. She was a competitor, full stop. And she was formidable.

Sadly, like all heroines, she met a tragic end when in foal, she inexplicably ran into a night watchman's truck in the U.S. I will forever remember how she gave me the gumption to be brave and follow my heart in the horse business–doing it my way.

Best: Picking the best racehorse can be controversial. The means of evaluation change constantly as no sport remains static. How do you compare different eras? There are many roads to greatness. What is the defining one? Highest percentages, most dominating performances, consistency, colorful stretch runs.

Tesio demanded that greatness was defined only when a horse passed the finishing post in the Epsom Derby!

I thought about Secretariat's consistent brilliance, and his Triple Crown wins in record time. However, in my humble opinion the best racehorse was Man o' War (Fair Play). He was a freak of nature. He won 20 of 21 starts. If you talk about speed, he was clocked 45 miles an hour to Secretariat's 41! If you discuss dominance, he was never extended and won one race by a hundred lengths. If you consider overshadowing the competition, he always won gearing down (except once. losing to Upset when he had his back to the tape at the start and his jockey, Johnny Loftus, was subsequently refused his license the following year with rumors related to that famous defeat in Saratoga).

He had the highest handicap weights ever assigned in history and was carrying on average about 32 pounds more than his competition. He was retired after his 3-year-old year when his owner Samuel Riddle did not want to subject him to even higher weights. Big, raw and oozing power, an oil painting he was not, but a racing machine he was and would surely have mowed down the competition in the Kentucky Derby (and been a Triple Crown winner) but for the enigmatic stance of Samuel Riddle to keep him home.

The theater of his burial was not lost on me and I have a photo of him in my house that I look at every single day in the hopes I can one day select one just like him!