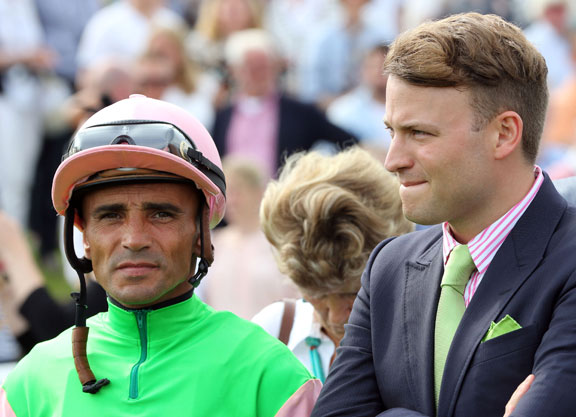 It hasn’t been a bad year for Holger Faust’s HFTB Agency, all things considered. They have been involved in the sale or purchase of three Group 1-winning fillies in 2020, namely Princess Zoe (Ger), Sunny Queen (Ger) and finally, Donjah (Ger), who will be the only Group 1-winning filly in training to be offered at public auction in Europe this year when she goes through the Arqana sales ring on Saturday afternoon.

Faust’s involvement with the G1 Preis von Europa winner, who is catalogued as lot 182, is certainly not a fleeting one. Indeed, the daughter of Teofilo (Ire) was bred by his family’s Gestut Karlshof before he purchased her as a yearling at Baden-Baden for his client Dr. Stefan Oschmann’s Darius Racing.

Donjah is a filly that Faust speaks of fondly, and understandably so, but despite her accolades on the racecourse–an unbeaten 2-year-old season, two group race wins and multiple group race placings – he can’t help thinking that with a little more luck, the best is very much still to come.

“I liked her from the very start, when she was a foal,” says Faust. “She was always special, but I have to say, when you look at her racing career she has been quite unlucky so far. I think that she could be even better than she already is.”

“She was meant to run as a 3-year-old in May as a trial for the German Oaks,” he explains, “but she got lightly injured during a morning canter beforehand, so we needed to put her out for four weeks and start again. She started first time out in the German Oaks and still ran a big race to finish sixth. A riderless horse took her wide outside at the beginning of the straight which hampered her chances. She might have won that race otherwise because she has proven many times that she was by far the best filly from that crop of 3-year-olds.”

Donjah’s 2020 campaign, while hampered by COVID-19 like most others, saw her finally land the Group 1 she deserved in the Preis von Europa at Cologne which was planned to serve as a warm-up for the Breeder’s Cup, as Faust explains.

“This year we focused everything on the Breeder’s Cup and we made the decision at the very last moment whether to run in the Filly & Mare Turf or in the Turf,” he says. “Her preparation was quite good and up until the race we were very excited but, unfortunately she slipped around the second corner and lost her action. You cannot run in one of the biggest races in the world, against the best horses with a faux pas like that. It’s a shame because we think she would have run a good race otherwise.”

Perhaps luck has not always been on her side but there is no getting away from the fact that Donjah is a hugely consistent Group 1-winning filly, who at four years old is still relatively lightly raced. When it comes to her next options, Faust says he believes that the world is her oyster.

“I think she is good enough to run all over the world,” he says. “She could handle the races in the U.S. over a long trip and try the Breeders’ Cup again with a bit more luck. She would also possibly suit Japan. She’s by Teofilo, so if Australians are looking for a potential Cup horse and a good broodmare afterwards she could go down there too.”

Such is the regard for the Darius Racing colourbearer that Faust warns that they would be happy to hold onto her if she doesn’t reach her true value on Saturday.

“The thing is she is not sold yet,” he says. “It depends what happens in the ring. If we don’t get a fair price on her then we will keep her racing next season.”

Faust first met German businessman Dr. Stefan Oschmann in 2012. The following year he began buying yearlings for him and by 2014 Darius Racing was formed. The relatively young operation became Germany’s champion owner in 2016 after winning the German Derby with Isfahan (Ger) and has since ranked consistently among the top five leading German owners. A first foray into breeding by Darius Racing, under the guise of Anahita Stables, produced 2020 Group 1 winner Sunny Queen.

It is safe to say that the relationship between Faust and Dr. Oschmann has been a fruitful one and another interesting lot representing Darius Racing at the Arqana Breeding Stock Sale is the listed-winning daughter of Holy Roman Emperor (Ire), Apadanah (Ger) (lot 132). Plagued by problems in the starting stalls, she is another that Faust says he believes has the potential to be far better than she looks on paper.

“She’s got so much class but she lost her races a couple of times at the start,” Faust says. “When she won her listed race at Dortmund she lost five to 10 lengths at the start. When you look at her performance in the German St Leger she loses 25 lengths at the start and was beaten by five lengths, so you can imagine how much ability she does have. If she was a good starter, I think she is a horse that could run in every Grand Prix race all over Europe.”

“To be honest, she is a very interesting lot from either a racing or a breeding perspective,” continues Faust. “She’s by Holy Roman Emperor and there are a lot of things happening in her family. She has Alson (Ger), Step By Step (Ger) and a Melbourne Cup winner, Almandin (Ger), in the family as well. Apadanah’s Sea The Stars (Ire) half-sister sold for 400,000 guineas as a foal at Tattersalls last year and the mother is a young Alderflug (Ger) mare so there is still plenty to happen too.”

The Faust family’s Gestut Karlshof is also represented by two standout lots to be offered at the Arqana Breeding Stock Sale on Saturday, under the Ecurie Des Monceaux banner. Catalogued as lot 192 is the Classic-placed daughter of Night Of Thunder (Ire) No Limit Credit (Ger), who reminds Faust of another Gestut Karlshof-bred, the dual Grade I winner A Raving Beauty (Ger) (Mastercraftsman {Ire}).

“No Limit Credit is a fantastic racehorse,” he says. “She was the second richest 2-year-old filly of all time in Germany. Despite doing a lot at two her form didn’t decline as a 3-year-old when she was Classic-placed and won a group race. Her lifetime best form was in the Lydia Tesio in her last start where she got stuck on the inside so the jockey had to go the long way round and she was flying at the end. She proved then that she can stay.”

“We thought all along that she could stay,” continues Faust, “but we prepared her for the German Oaks which she ran a poor race in. It turns out she had an infection afterwards, but as it was her first disappointing race we thought she should go back to the mile. We ran her at a mile and the jockey said she needed further but we did the opposite and ran her over seven furlongs on heavy ground where she was an easy winner just because of her class.

On the subject of A Raving Beauty, Gestut Karlshof are also offering the dam of the multiple Grade I winner and performer, Anabasis (Ger) (High Chaparral {Ire}) (lot 164), who at 12 years old is already well proven as a broodmare with plenty more potentially still to come.

“There are two reasons for selling her on,” explains Faust. “First of all, we are packed with the family at the stud. We have a sister of hers and daughters, including A Racing Beauty (Ger), full sister to A Raving Beauty who was listed placed this year and remains in training. Secondly, we noticed that for German breeders, it’s hard to get a really good result in the sales ring for the yearlings and the racing prospects and broodmares have been sold for better money in recent times. Maybe because we don’t have the same yearling preparations here or maybe because German breeding is a little more backwards than Irish, English or French. That’s why we said, ‘ok, if we get a fair price on her then we will sell her,’ but obviously she has a reserve price so we shall see what happens.”

Indeed, there will be plenty to keep an eye on for Faust on Saturday as he follows four very exciting lots through the Arqana sales ring and he’ll be hoping that what has already been a good year for HFTB Agency can finish on a high note.