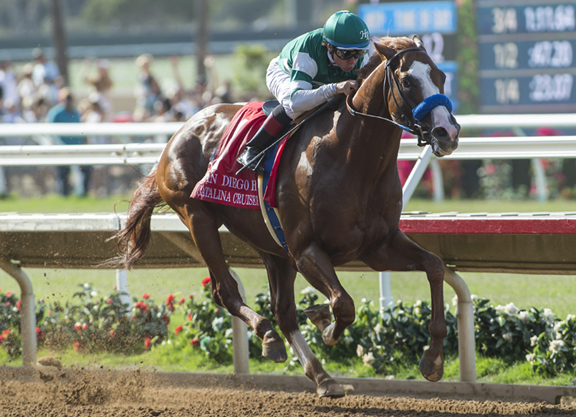 VERSAILLES, KY–With the foal crop of 2020 beginning to gradually dot the paddocks of the Bluegrass, excitement and anticipation are running high, perhaps even more so for a stud farm with a stallion celebrating its first arrivals.

For Lane's End Farm, the feeling is threefold, with the farm set to welcome the first crops of Grade I winners Accelerate (Lookin At Lucky), City of Light (Quality Road) and West Coast (Flatter).

In a media-only event at the farm's stallion complex Tuesday evening, Lane's End's Sales Director Allaire Ryan said she has been touring the Bluegrass to see some of the early arrivals of the trio. They have, apparently, set the bar high.

“I've had the opportunity to visit with some local breeders over the past week and we're really pleased and impressed with what we're seeing so far from these stallions,” Ryan said.

Accelerate is a classically made son of dual Eclipse champion Lookin At Lucky. While most of his elite crop-mates were taking some down time after the Triple Crown of 2016, Accelerate was breaking his maiden by 8 3/4 lengths at Del Mar in late July. He didn't stay below the radar long, winning the GII Los Alamitos Derby two starts later and adding the GII San Diego H. back at Del Mar the following summer. It was at five that he truly came to life, however, winning six of seven starts including five consecutive Grade Is.

“Accelerate so far has been consistent with throwing nice, strong foals,” Ryan said. “He gives you a good amount of leg and scope and a well-balanced individual on top of that. They're straightforward, they have great angles and they've been correct so far. Based on what we've seen from what's on the ground he's a stallion you could put any type of mare to and get a quality individual from, which is really special. His covering sire average at the breeding stock sales was impressive as well, a little over three times his stud fee with a high price of $400,000.”

Accelerate was denied a fairytale finish by his future studmate City of Light in last year's GI Pegasus World Cup, and that son of Quality Road compiled quite an impressive package, having also taken the GI Breeders' Cup Dirt Mile, the GII Oaklawn H. over 1 1/8 miles and the GI Malibu S. and GI Triple Bend S. over seven furlongs.

“The City of Light foals have been impressive so far,” Ryan said. “He's looking like he's throwing a classic-looking individual: lots of leg, pretty profiles with a great head and eye, a lot of quality. He too did very well as a covering sire at the breeding stock sales; his mares averaged $217,000, which is 5 1/2 times his stud fee, which is absolutely remarkable. Nineteen mares in foal to the stallion brought at least $200,000.”

Ryan acknowledged that the first foals of West Coast, the GI Travers S. and GI Pennsylvania Derby winner who was also placed in the GI Breeders' Cup Classic, the Pegasus and the G1 Dubai World Cup, “are the most forward, precocious-looking physicals out of the three.”

“West Coast is also throwing some impressive individuals,” she said. “I'm really impressed by the amount of natural substance that these foals already show. They have great bone and muscle tone, balance, and they look like athletes already, which is very exciting.

“Based on what we're seeing now and the support these stallions had from the breeders and in the sales ring, we have nothing but hope that they're all going to be represented by a top-quality first crop.”

As the longstanding yearling manager at Lane's End, Peter Sheehan has had the opportunity to work closely with multiple generations of Lane's End stallions and their progeny. This season, his experience comes full circle once again as the first crop of Lane's End stallions Unified (Candy Ride {Arg}) and Connect (Curlin) celebrate their first birthdays.

“Unified himself was about as good a looking son of Candy Ride as I've ever been around,” Sheehan said. “He had a great hip and shoulder, a beautiful profile and was a beautiful mover.

“His offspring remind me a lot of him, and also of the Twirling Candys I've been around. They've got strong, powerful hips, great shoulders; they're great-moving horses. They look like they're supposed to, like they're by a son of Candy Ride out of a Dixie Union mare: they have that strength and that look of speed.”

“The thing that probably impresses me the most about the Unifieds is their minds,” Sheehan added. “They have a great eye and they look like they're going to be good, honest horses, easy to train and horses that are going to give it their all. I think we're going to see the best out of the Unifieds once they go under tack; that's what we saw with the Twirling Candys and I think that's where Unified is headed.”

Connect, winner of the 2016 GI Cigar Mile, is by Curlin, who Sheehan would have had plenty of experience with in the early days, that two-time Horse of the Year having started his stud career at Lane's End.

“The Connects are a bit more of an obvious horse,” Sheehan said. “They have an elegant profile, pretty looks and they're very attractive; they'll be very attractive to the commercial marketplace as well.

“Connect was a very forward horse. He was a $150,000 July Sale yearling at Fasig-Tipton. Connect is a more correct, stylish version of his sire Curlin, and he really seems to be passing that along to his stock. He's really stamping them and his offspring have plenty of leg and scope, they're very correct and they move beautifully. I think that coupled with their elegant profile and the classic racehorse shape that's he's throwing, I think we're going to see some fireworks in the sales ring and they'll bring that forward onto the racetrack.

“I think we have two very exciting young sires here that are going to appeal to lots of different people, whether they want to race or resell.”

Joining the Lane's End roster for 2020 is another son of a resident sire in Catalina Cruiser (Union Rags). In fact, Catalina Cruiser is a true home-grown product: he is out of a daughter of Mineshaft, a Lane's End Horse of the Year by its immortal A.P. Indy, and he was bred by Will Farish and sold by Lane's End at Keeneland September in 2015 for $370,000 to David Ingordo on behalf of the Hronis family. Trained by John Sadler, Catalina Cruiser went unbeaten through his first four starts, including 6 3/4- and 7 1/4-length scores in the GII San Diego H. and GII Pat O'Brien H.

Turning the calendar over to Catalina Cruiser's 5-year-old campaign last year, the goal was to further enhance the chestnut's credentials and earn him a spot alongside his sire in the stallion barn at Lane's End.

“Cruiser had been a horse that from the day we brought him home, the day we broke him and got him going, we always knew he was a bit special,” Ingordo recalled. “When John [Sadler] debuted him for his 5-year-old season, he said, 'we have to make this horse a Lane's End stallion.' I said 'yeah, that would really help my resume, it would be really nice if you could do that.'”

Catalina Cruiser shipped to Belmont Park for his seasonal debut in the GII True North H., where he battled on to win by a half-length in stakes record time despite traveling wide throughout.

“John said what would get him there [to the Lane's End stallion barn] was winning a big race in a place like New York,” Ingordo said. “And he not only won a big race in New York, he broke a stakes record in a race that's been around a long time. And Joel Rosario never hit him. So with these new whip rules we'll have, the Catalina Cruisers are going to be ok with that.”

Catalina Cruiser added repeats in the San Diego and Pat O'Brien last summer. Ingordo admitted that a Grade I is missing from his resume, but noted that a similar omission hasn't held back stallions like War Front and Distorted Humor from reaching the pinnacle in their second careers.

“Cruiser is missing a Grade I, but we were talking about War Front and Distorted Humor, two leading sires that were brilliantly fast. Cruiser is fast, and that's what stallions need, is speed. He has the looks to go with it and he has a great pedigree. For $20,000, you can't really go wrong.”

Terence Collier, who played the role of emcee for the evening, recalled the story of another great sire who had no issue rising to legendary status despite the lack of a win at the highest level. This sire, too, has roots with the Farish family.

“I don't hear the story repeated often enough that Bill's dad took on a project many years ago when he partnered with a gentleman by the name of Marshall Jenney who had Derry Meeting Farm in Pennsylvania,” Collier said. “They raced a mare called Pas De Nom together and had some success with her. She was a tough, hard-knocking racemare. She didn't have a lot of glamour but she was a very successful racemare.

“Pedigree will always out in one way or another, but unless they have that speed inherent in their breeding, you're hoping they're going to make a stallion. This one, Catalina Cruiser, has got it.”

Lane's End, too, has the precedent as a stallion-making operation to continue its history of success, and such a roster of exciting young horses should ensure it remains in the headlines for generations to come.