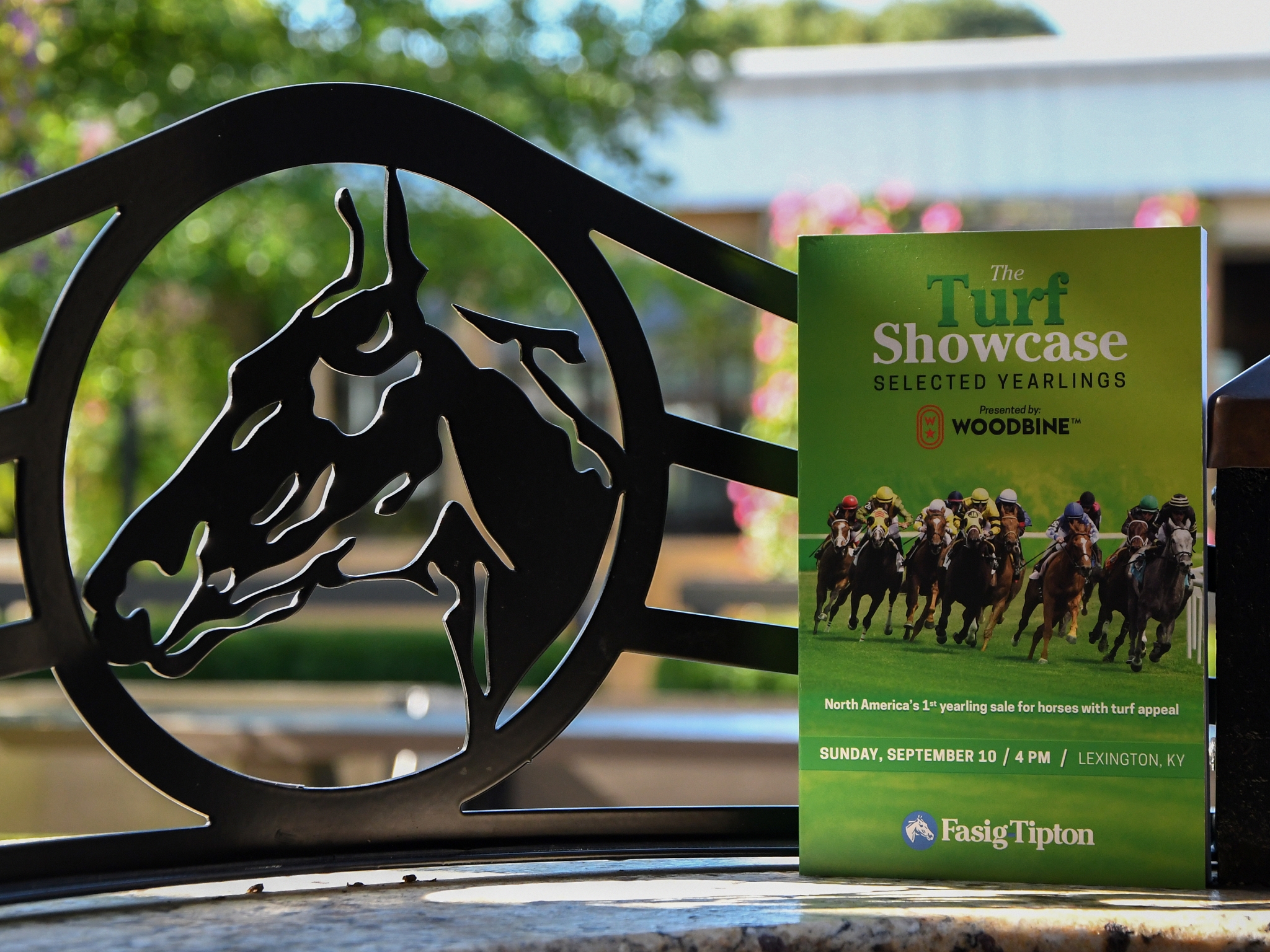 LEXINGTON, Ky – The inaugural Fasig-Tipton Turf Showcase Selected Yearlings Sale presented by Woodbine gets underway Sunday afternoon, with bidding on the 171 catalogued youngsters scheduled to begin at 4 p.m. at the company's Newtown Paddocks in Lexington. The sale was designed to capitalize on the increased popularity of turf racing in the United States, as well as to take advantage of the presence of foreign buyers in town for the Keeneland September Yearling sale, which begins Monday. Consignors have been pleased by the turnout at the sales barns both Friday and Saturday with shoppers representing a varied cross-section of potential buyers.

Vinery catalogued 10 yearlings to the new turf sale and MacKenzie is looking for the youngsters to stand out more at Sunday's one-session auction than at the marathon Keeneland sale.

“We had some nice horses that we thought would work internationally and it looked like Fasig-Tipton were going to do their best to draw them here and maybe showcase them a little bit more,” MacKenzie said. “For some of the European horses that we thought might get into the second week at Keeneland, we were worried that maybe the buyers wouldn't be there then. We knew they would be here for this sale.”

Taylor Made Sales Agency catalogued 29 yearlings for the turf sale.

“I think turf racing is becoming more popular in the United States and this sale is a way for people who have bred horses who have an angle to the turf, to get them all concentrated in one area,” said Duncan Taylor. “Hopefully, the way it will work, is Europeans and people from around the world who like turf racing can come look at the turf horses in one spot. The most important thing that wealthy people have is their time–so this is a way for us to get as many horses in front of them in a short period of time.”

Taylor looks for the Turf sale to be a springboard to a strong two weeks of yearling sales in the Bluegrass.

“I am hoping this sale will help the Keeneland sale as well,” he said. “Everybody has always been scared of Book 1 and I think if this sale gets the market rolling before we go into Keeneland, it will also help that.”
The yearling sale season, which started with Fasig-Tipton's July sale two months ago, has produced strong results so far and MacKenzie looks for the trend to continue.
“All of the sales that we've done so far, July and Saratoga, the viewership was up and it's up here, too,” he said. “So it's been a good year and it looks like it's continued on here.”

Pugh Plays the Exchange Rate at Fasig
Trainer Peter Pugh and wife Caroline, who have been consigning horses under the Skara Brae banner for the last decade, decided to head west from their typical New York base just in time for the inaugural Fasig-Tipton Turf Showcase Sale. Skara Brae–a nod to Caroline's Scottish heritage–will offer two yearlings by Exchange Rate during Sunday's sale.

“We've been doing this on and off for probably 10 years,” Peter Pugh explained. “We did pinhooking and we trained for Happy Hill Farm, too, and we sold some of their homebreds. Usually we sold at Saratoga because the farm is there–we had New York-breds and we sold them at that sale. We've ventured out now that we're in Kentucky.”
Both Exchange Rate yearlings are pinhooking prospects. Hip 15, son of the late stallion, was a $32,000 Keeneland November purchase by Pugh last year. The colt is out of Cayman Sunrise (Petionville), a full-sister to multiple graded stakes winner Sailors Sunset, and from the family of Grade I winner Wickedly Perfect.

Hip 151, an Exchange Rate filly, was a $47,000 purchase at last year's Keeneland November sale. Out of Vesper Cat (Mountain Cat), the yearling is a half-sister to graded stakes winner Strike the Bell (Mizzen Mast). Her dam is a half to Grade I winner Hymn Book (Arch), as well as to the dam of Grade I winner Data Link (War Front).
“Both of them have turf pedigrees, so it seemed like a no-brainer to come here,” Pugh said.

Asked what he looked for in a pinhooking prospect, Pugh explained, “You've got to have pedigree–obviously the type has to be pretty good, too, but if you don't have pedigree, you don't sell. The filly, for instance, has a deep family. She's a half-sister to a Group 3 winner and under the second dam there are three group winners. So she has a solid pedigree and so does he. His isn't quite as fancy as hers, but his is pretty good, too.”

The yearlings, who spent the winter at Lambholm South, are part of a small pinhooking venture for the Pughs.
“We have just a few–three or four,” Pugh, a former steeplechase rider, said. “Just to see where it takes us. I also train, so I don't want to spread myself too thin. But this is fun.”

As Fasig-Tipton prepares to host its first Turf Showcase sale, Pugh said he has been encouraged by the activity at the sales barns.

“You've got to be a little concerned [about a new sale], but I truly believe if you bring the right horse to any sale, they are going to sell,” he said. “People will find them. There are a lot of seriously good horse buyers out there these days. They don't miss much. I've seen a lot of people that I recognize, the Nick de Merics and those types. And there are a lot of Europeans here, and you've got the Japanese here. So I would say I'm cautiously optimistic.”