Fasig-Tipton Saratoga Sale Could be Majic for Poindexter 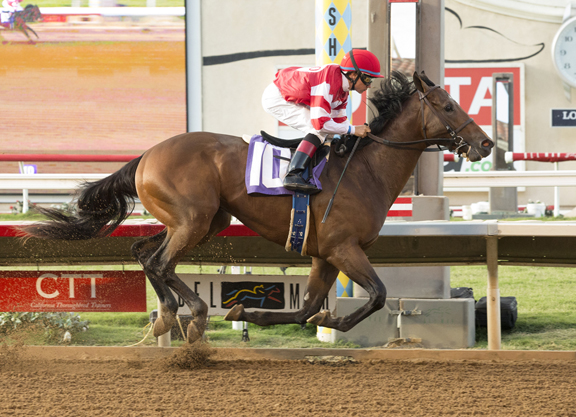 Longtime owner and breeder Allen Poindexter will offer four yearlings at the upcoming Fasig-Tipton Saratoga Selected Yearlings Sale and two of the quartet received a timely update with the sparkling debut win of Rowayton (Into Mischief) at Del Mar last Saturday (video). Through the Bluewater Sales consignment, Poindexter will offer a full-sister to that 2-year-old colt, who himself sold to Larry Best's OXO Equine for $320,000 at last year's Saratoga sale. During the auction's second session, Poindexter will offer a filly by Tapit out of Rowayton's second dam Kid Majic (Lemon Drop Kid) through the Gainesway consignment.

Rowayton's front-running win going five furlongs at Del Mar was not exactly a surprise to Poindexter.

“I was really kind of expecting it,” he admitted. “We had been hearing that they thought this was a very nice colt. We thought that he was really going to run well and, considering he drew the 10 hole and they wrapped up on him probably 50 yards from the wire, I thought he ran very impressively.”

Poindexter purchased Kid Majic as a 2-year-old in 2006 as part of a racing partnership. The mare, a half-sister to Grade I winner J P's Gusto (Successful Appeal) and from the family of champion Proud Spell, was third in the 2007 Lone Star Oaks.

“I bought her with Champion Racing as part of partnership to race her,” Poindexter recalled. “And then I bought them out or traded them out when we knew she was going to be a broodmare. I liked that she was a Lemon Drop Kid and the family is pretty deep.”

Poindexter has high hopes for the mare's Tapit yearling, who will sell at Saratoga as hip 142, as well as the weanling who could well be in next year's auction.

“She's drop-dead gorgeous,” Poindexter said of the yearling. “I also have a weanling out of Kid Majic by Tapit. I think she could be even nicer than this filly. And this filly is a 10.”

Kid Majic's third foal was Rosemonde (Indian Charlie) who RNA'd for $195,000 at the 2013 Saratoga sale. She was training at Churchill the following fall, but never made it to the races. After producing Rowayton in 2016, the mare produced a filly by Into Mischief last year. That yearling is catalogued to the Saratoga sale as hip 88.

Comparing the two siblings, Poindexter said, “I think [the yearling filly] is bigger than the colt. She's very racy and I think she's physically maybe even better than that colt.”

Poindexter's Saratoga quartet also includes hip 115, a daughter of Empire Maker who is consigned by Bluewater and is a half-sister to multiple stakes winner Awesome Speed (Awesome Again); and hip 151, a filly by Street Sense who is consigned by Gainesway and is out of a half-sister to Grade I placed Gio Game (Gio Ponti) and multiple graded stakes placed Isotherm (Lonhro {Aus}).

“I'm very excited about the Saratoga sale,” Poindexter said. “We have four excellent horses. The Street Sense is a really nice filly and I think the Empire Maker filly is the only Empire Maker that is in Saratoga. This Into Mischief, of course I'm prejudiced, I think she will be the best physical Into Mischief that is in the sale, plus she has a hell of an update with Rowayton.”

Once the Saratoga sale is over, Poindexter has plenty to look forward to at next month's Keeneland September Yearling Sale.

“I have some really nice horses going in September also,” he said. “I've got Gio Game's brother by Bernardini and I have a  Wicked Strong colt who is very, very nice.”

Poindexter traces his involvement in racing to a visit to Oaklawn Park in the 1970s when he was working on a Mississippi River oil refinery. Now living in Missouri where his primary business is Allen's Mechanical, a plumbing, heating and air conditioning company, Poindexter's racing stable began in the early 1990s.

“I started with one or two horses and I've probably had as many as 40 in training from coast to coast,” he said. “We have cut our numbers back in racing and concentrate more on the breeding now because it's more profitable. It's tough to race.”

He continued, “I am one of these that sell the best and keep the rest and by never knowing what the best is in this business, I sell the ones that are the most commercial.”

In addition to his 25-strong racing stable, which regularly sees action across the country, Poindexter has a broodmare band of some 70 head.

“They all get bred in Kentucky,” he said. “All of my mares in Kentucky are at Tim and Nancy Hamlin's Wynnstay Farm and they do an excellent job for me. And then I foal them out in New York, some in Pennsylvania, Iowa, Oklahoma, Indiana. So I have foals all over even though they are all bred in Kentucky. That allows me to take advantage of the regional programs in those states and it also gives me a good way of getting my mares black-type horses through state programs, which increases their pedigree. So the next foal has black-type.”

Poindexter, who campaigned multiple stakes winner and graded stakes placed Chanel's Legacy (Dominus) and sold a son of Kid Majic for $600,000 at the 2016 Fasig-Tipton Midlantic May Sale, thinks diversification is key to his success.

“We sell weanlings, yearlings, 2-year-olds, we race, and we have a significant breeding program,” Poindexter said. “I am in all aspects because it gives me other ways to go. At a yearling sale where people don't race and don't go to 2-year-old sales, they get backed into corners to where they sell–no matter what the price is, they let them go.

“I take some to the [yearling] sales and, if they get RNA'd, I use Cary Frommer or Susan Montanye at SBM and I'll take them on to a 2-year-old sale. I had one RNA this year, a Yes It's True filly, I RNA'd her for $17,000 [at Keeneland September] and then took her to the 2-year-old sale and she brought $270,000 [at OBS April]. It happens. If I think they are a racehorse, then I don't bail out. I just say, 'We'll go to the next step and prove to people that this is a racehorse.' And sometimes there will be minor vet issues that will keep the horse from selling for what I want it to bring, but yet as a racehorse, it's not going to bother them. So we'll race them.”

The Fasig-Tipton Saratoga sale will be held Aug. 6 and 7 at the Humphrey S. Finney Pavilion. Both sessions begin at 6:30 p.m.