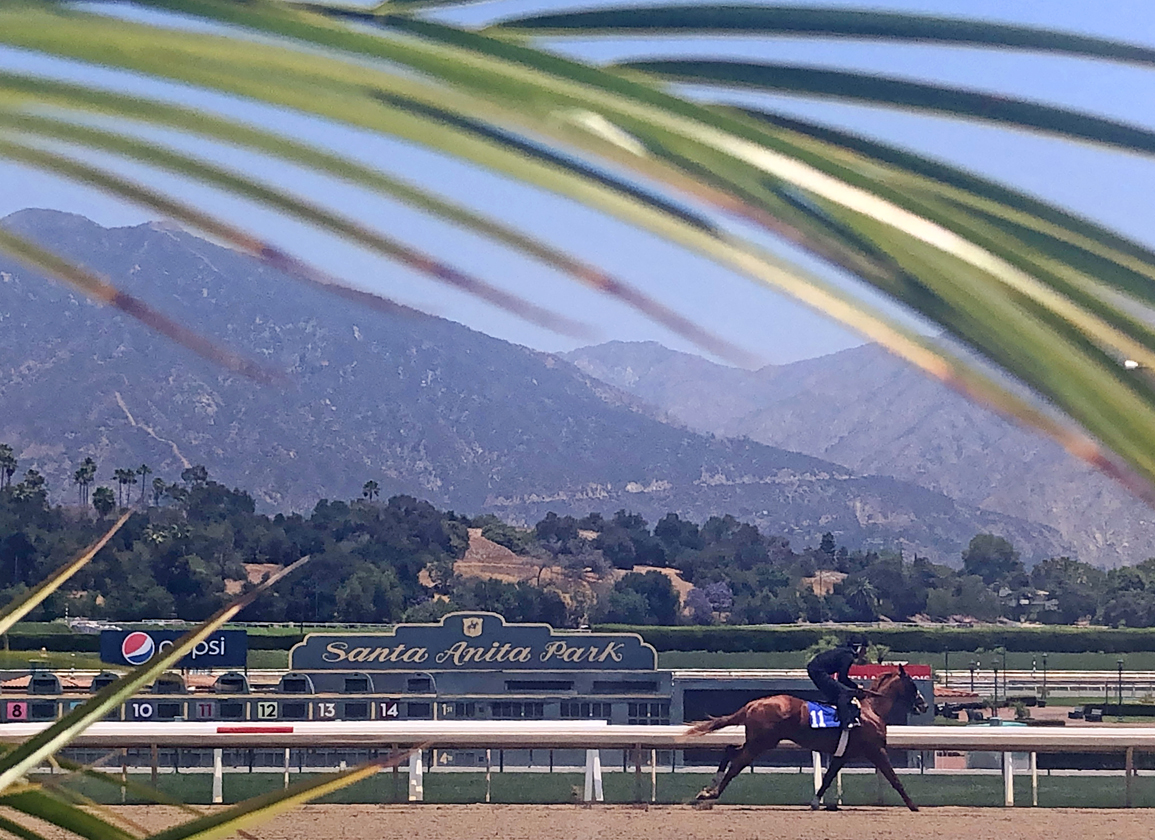 Fasig-Tipton, which hosted its first Santa Anita 2-Year-Olds in Training Sale in 2019, was forced to cancel the 2020 renewal of the auction due to the pandemic, but the sale returns to the Arcadia track for its second edition Wednesday. Bidding is scheduled to get underway at 1 p.m. PT in the Santa Anita winner's circle.

Raul Reyes's Ocala-based Kings Equine, which sold three of the top four lots at the 2019 Santa Anita sale, returns with a 13-horse consignment in 2021.

“It was an easy decision to come back–it didn't take me too long to think about it,” Reyes said of his return to California, which offers him the chance to mix business and pleasure.

“My mom lives here in L.A., so I always like to come out here,” he explained with a smile.

“It went well. I am very happy with how it went Monday,” Reyes said of his consignment's under-tack show results.

A total of 115 juveniles have been catalogued for the one-day sale–down from 168 in 2019–and there were 39 horses withdrawn as of Tuesday afternoon.

Of the slimmed down catalogue, Reyes said, “I'd like to see the sale be bigger. It's better for the people who we have horses here with because there isn't so much competition, but for the sale to do well, I'd like to see a bit more horses. But there are trainers and a few bloodstock agents here looking and they are all very positive and wanting to buy horses.”

“I'm showing three horses as we speak and I've only got six horses in the sale,” DeBerdt said. “I'm very, very happy with the activity and there are serious buyers here, not just looky loos. I'd say it's probably at least 60% trainers and then we have agents and a few owners. I am very happy with the turnout.”

DeBerdt agreed the success of the Santa Anita sale is vital to the industry in California.

“It's very important to have this sale,” he said. “I hope everyone supports it because it's our only outlet. Fasig-Tipton just does a Grade A job. The stabling is good and they have good personnel managing it and it's been very pleasant to be here.”

While the auction's momentum was halted in 2020, DeBerdt looks for a strong sale Wednesday.

“We sold in the first sale in 2019 and we did well,” DeBerdt said. “And then we had a very large consignment scheduled for 2020, which obviously didn't materialize. So this year, we kind of toned it down. But the market is very healthy right now overall. Obviously, your better horses are going to bring good money and the not-so-good horses are going to probably not bring very much money, but I think they'll get sold. It's going to be a polarized sale, in my opinion, but we've got enough buyers here.”

Al Pike is offering his first Santa Anita consignment, with nine horses scheduled to go through the ring Wednesday.

“I had some horses at the March sale that we had lost time with due to the weather at home in February, so we weren't ready for March. So we just opted out of there and put them in this sale thinking that this would be a good spot for them,” Pike said of the decision to sell at Santa Anita. “We got more time with these horses that needed it and I am hoping to be rewarded for waiting.”

Of the activity at his barn Tuesday, Pike said, “We have been awful busy here. I am pleasantly surprised. I didn't know what to expect. This is my first time basically coming to California–coming to Santa Anita was on my bucket list, so I can check that off. It's a beautiful place. We've been treated really well here. Fasig-Tipton always does a great job.”

“The breeze show went well,” Pike said. “The horses performed well. The track was not a fast track, it was kind of a deep track, but they got over it well and came home good. I had some people ask me, 'Was it slow horses or a slow track?' I said, 'I can tell you from home, it wasn't slow horses.'”

Pike agreed there was always some concern with attracting buyers to a sale with a smaller catalogue, but he said, “If it's a good horse, it's going to sell well. And there are some good horsemen looking at these horses, so I think it's going to be a good sale.”

“Bochombo ran a terrific race breaking his maiden [May 23] kind of coming off the pace,” Havens said. “And then he ran second in that stakes on Sunday to what looks like a special kind of colt. He's a fabulous horse. He's really attractive and looks like he is going to go on rather than win at these short distances. And he's very sound. I think he's a really useful horse.”

Of Ko Olina, Havens said, “The horse they gave the race to–Baffert's Munnings filly [Eda]–cost $550,000 [at OBS March]. She beat her and they were 13 lengths ahead of the third horse, so she showed she could win, but the buyer still gets the condition.”

Havens continued, “We are heading into Del Mar and people are looking for horses like this. I think this is a really unusual opportunity for 2-year-olds. These horses have shown they belong at a really upper level and they are sound. So you have as immediate action as you can get with a 2-year-old. We are getting a whole lot of interest here for both of these.”

While sales horses for the 2019 sale were housed in temporary barns near Santa Anita's seven-furlong chute, the 2021 horses are on the track's backside.

“We have had a terrific amount of interest,” Havens said. “We are on the backside of Santa Anita, so it's really worked out well from that standpoint in terms of interest.”

Havens is hopeful that, after having the sale's momentum interrupted last year, Fasig-Tipton will be able to build on the 2021 results.

“I think it's absolutely essential that we have a 2-year-old sale in California,” Havens said. “I think missing last year really impaired the turnout for this year. Because it has not been a real strong turnout relative to what we used to have. We used to have two sales here. We used to have a March sale and a May sale. When Barretts ended and Fasig took over with this sale in June and then missing 2020 completely, I think it put cold water on people's response to this sale. But they succeeded in getting a number of people from out of town, Florida in particular, and I have a really nice group. So I am very encouraged by that.”