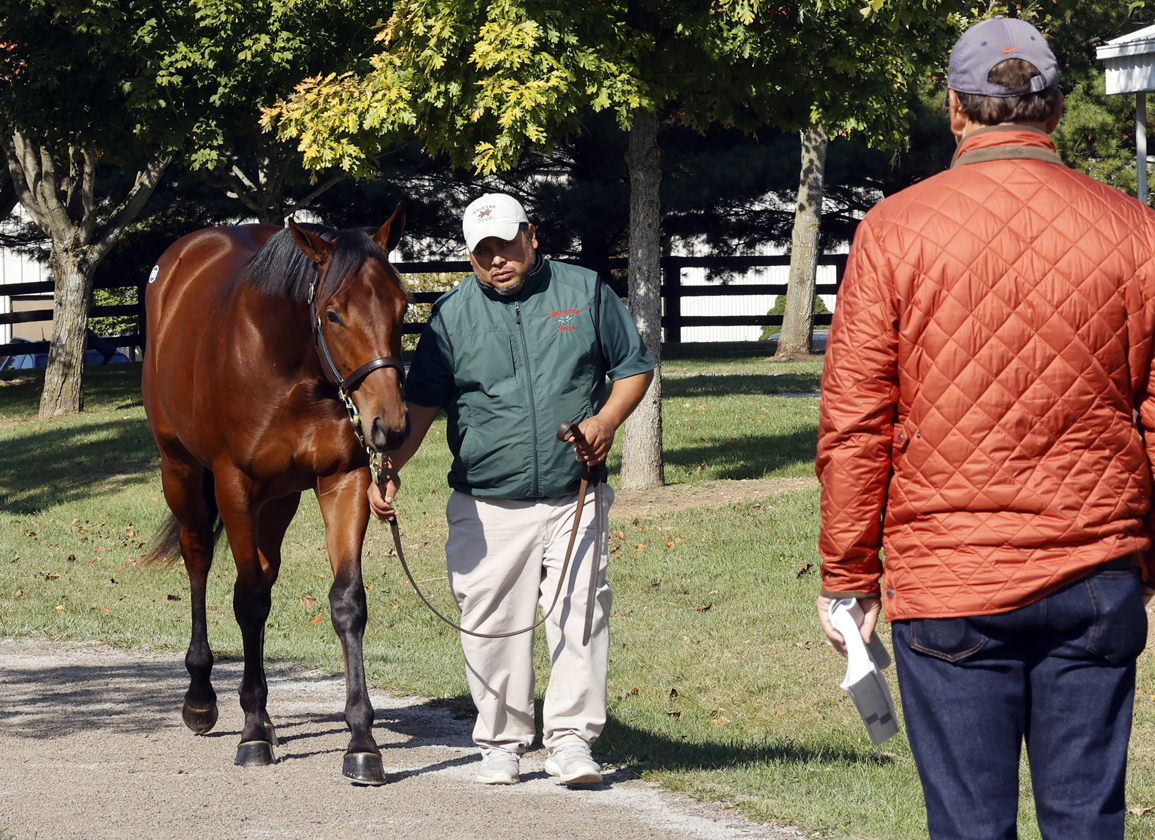 LEXINGTON, KY – The Fasig-Tipton Kentucky October Sale brings the curtain down on a competitive season of yearling auctions when it begins its four-day run at Newtown Paddocks Monday morning. A total of 1,586 yearlings have been catalogued for the auction and bidding begins daily at 10 a.m.

Consignors were kept busy showing over the weekend and the foot traffic at the barns was a testament to the auction's continued growth in popularity in recent years.

“Historically, with the October sale, once the first call to post at Keeneland would ring, we would lose about 70% of the viewers,” Tommy Eastham said in front of his Legacy Bloodstock consignment on a rainy Sunday morning. “Saturday, we didn't see that. We stayed busy up to about 4:30 and our shows were up by about 20%. We saw some European guys here–that's unusual. And there has been a lot of interest from guys from all over the country that are going to be here. There is a lot of enthusiasm and there are a lot of good horses here.”

The evolution of the October sale has seen more and more yearlings pointed specifically to its later date.

“I think the sale has changed,” said Matt Lyons of Candy Meadows Sales. “Maybe before it was horses who didn't sell at other places who came here, but now there are enough good horses coming here for the first time. I think, for an agent, it's a sale you have to play because the best horse could be hip 1 or hip 1500. So you have to work the whole thing.”

Candy Meadows will offer 16 yearlings during the four-day auction, including a half-sister to stakes winner and multiple graded placed Coach (Commissioner) who the consignment sold at the 2019 October sale.

“All of my horses, this is their first sale. They've all been pointed here,” Lyons said. “So I hope there is enough money left. I have a good few later foals, so I like to give them a little bit of time.”

The auction's later date was a common answer to its rise in popularity.

“I think the catalogue and the results are the best advertisements,” Eastham said. “But even back 20 years ago, there was always a high-percentage of runners who come out of this sale. I remember asking Joe Taylor about these horses who vet better and they run better and he said, 'We leave them outside, we treat them different. We treat them like horses.' I think it gives more time for the horses to tell their stories to the buyers a little bit. So the buyers can see more of a mature product.”

The market has been strong right across the board all year. Consigner Bill Murphy expects those trends to continue at the October sale.

“I think overall it will be very strong,” Murphy said of expectations for the coming week. “Based on the sales throughout the year, the 2-year-old sales, the July Sale and Saratoga and September, there are still a lot of people who haven't been able to buy horses. So I think it will be very strong. But it will be the same old story. The high-end guys are going to land on the same horses and the middle to lower end are going to be spoiled for choice.”

Murphy agreed waiting for the last yearling sale of the season made sense for the horses in his consignment.

“I know I am [pointing specifically for the October sale],” Murphy said. “It gives the horse more time to mature, particularly if you've got a late foal. And they just do better. I used to go to July and earlier sales, but it's hard to get them ready when you are still breeding mares. For me the horses are more developed, more mature and if you have a good one, you're going to be a standout here.”

The popularity of the October sale has been bolstered by the success of its graduates on the racetrack. The list of 2020 graduates includes Jack Christopher (Munnings) who is the early favorite for the GI Breeders' Cup Juvenile following his victory in the GI Champagne S. at Belmont Oct. 2.

After RNA'ing for $145,000 at the Fasig-Tipton Selected Yearlings Showcase last September, the chestnut sold for $135,000 in October through the Paramount Sales consignment.

“I think a lot of good horses have come out of the October sale,” Paramount's Gabriel Duignan said. “I think it's a very rewarding sale for somebody who puts the work in and covers the ground. I think you can get really good buys here because it's the last stop for yearlings, so you'll have to breeze them or race them if you don't sell them here.”

Duignan continued, “I think now people are pointing horses for October. Every year, the quality is definitely going up. The horses do really well from September to October, they really do mature a lot in that month.”

Of Jack Christopher, who was bred by Castleton Lyons and Kilboy Estate, Duignan added, “He was a horse that probably got dinged for some small things by some vets that were nothing. But I had seen him all his life and he was always a beautiful horse.”