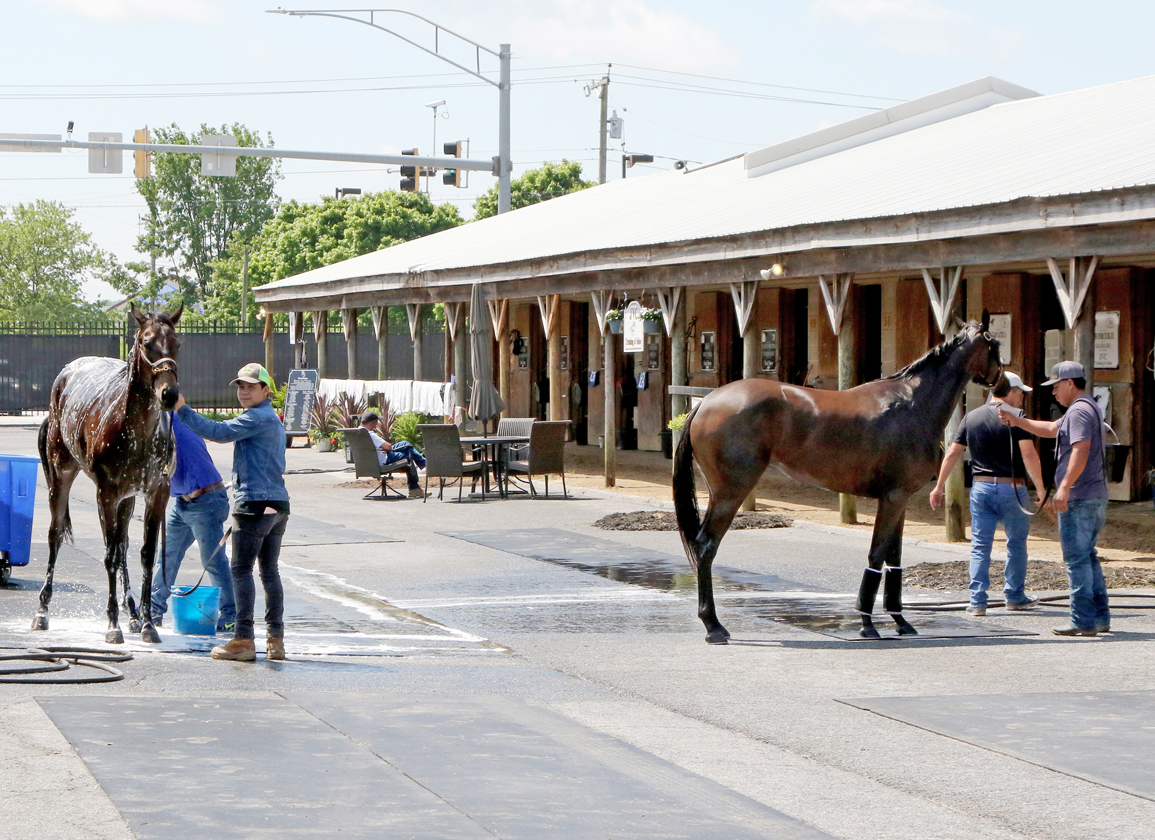 TIMONIUM, MD – After a stakes-filled weekend of racing at nearby Pimlico Race Course, the action moves back to Timonium for the Fasig-Tipton Midlantic 2-Year-Olds in Training Sale, which begins its two-day run at the Maryland State Fairgrounds Monday morning at 11 a.m.

“I'm always happy to be back in Maryland and to be back in Timonium,” consignor Cary Frommer said as shoppers looked for horses and shady spots on a steamy Sunday morning at the fairgrounds.

Of the action at the barns, Frommer said, “It's actually been quite steady for me. We have not had a moment where we weren't showing something. But I have 12 horses, so I would be busy. It's the usual people and maybe some new faces.”

The juvenile sales season, which opened in mid-March, is winding down and the Midlantic sale is the second-to-last major 2-year-old auction of the year.

“I like the time of year,” Frommer said of the Midlantic sale's late May date. “The horses are more apt to be ready for this. I do early sales, too, but there is a specific horse for an early sale, while this sale encompasses everything. You could take anybody here.”

Steve Venosa's SGV Thoroughbreds will offer two horses in Timonium this week and the consignor agreed the May sale's later date was a benefit for both of them.

“It's my last sale of the year. It's my last two horses that I had left,” Venosa said. “One had cut his hip really bad and missed a lot of training and the other horse was in an earlier sale, but being an Apr. 24 foal, I think he might have just missed. The 60 days allowed him to blossom and fill out. He worked well, he came back good and he's been very well-received.”

Last week's under-tack show ahead of the Midlantic auction was held over the fairgrounds' dirt track and the surface is another benefit of the auction, according to many consignors.

“It's the only sale that is later that is on dirt,” Venosa said.

Joe Pickerrell, watching the action from in front of his Pick View barn, agreed.

“Number one is the dirt,” Pickerell said of the Midlantic sale's appeal. “A lot of the buyers are looking for horses that they can win some dirt races with. This track really translates well to that.

The Pick View consignment was well-represented at Pimlico Saturday, with farm graduates finishing one-two in the GIII Chick Lang S.

“It was a great day of racing,” Pickerrell said. “That's why we do this–for races like that. All of the connections of both horses, we are close with them and it's been fun to follow along and cheer for them.”

For Frommer, the juvenile sales season has been slow and steady, with a strong middle market, but she is looking for things to heat up over the next two days in Maryland.

“I've sold everything this year,” Frommer said. “And almost everything for a profit. I haven't had a breakout, but I am hoping to have it at this sale. The middle market has been pretty good to me. It is usually what we complain about, that there is no middle market, but I have done quite well with that. For this sale, I think I have some top physical individuals who did their job on the track and everything vetted out fine afterwards. So that feels like hitting the lottery right there. Hopefully other people will think so too.”

“The market is strong for perceived quality,” Gladwell said. “When you jump through all the hoops–you vet good, you do the work and they are pretty horses on the shank, people are willing to give a lot more money than in years' past. They just seem to stack up on the same horses. The ones that make the cut and are what they think are the good ones, they will step in there and take a big swing at them.”

A son of Quality Road became the auction's co-highest priced colt ever when topping the 2021 auction at $1.5 million.