Fasig-Tipton H.O.R.A. Grad Could be on Way to Saudi Cup 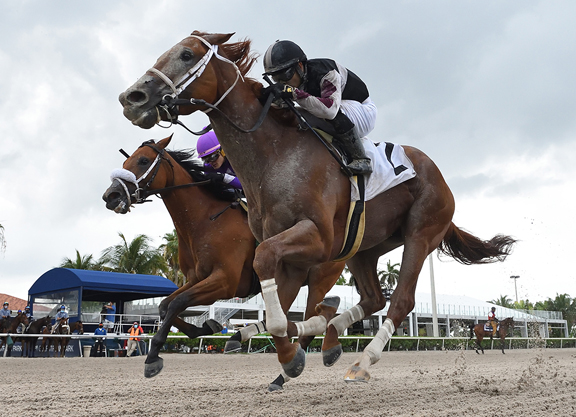 Scars Are Cool (Malibu Moon), a $175,000 purchase at Fasig-Tipton's 2020 July Horses of Racing Age Sale, won a US$27,000 open race for imported horses Friday at King Abdullaziz Racecourse in Riyadh, which moved him one step closer to a possible start in the $20-million Saudi Cup.

It was the second start in Saudi Arabia for the 5-year-old, who was campaigned by Sagamore Farm when racing in the U.S. He was unplaced in a Dec. 26 race before winning Friday's 1,600-meter event by three-quarters of a length. He broke his maiden in 2019 at Saratoga and came back to run in the GI Travers S. in his next start. He would go on to win allowance races at Churchill Downs and Gulfstream.

According to Tom Ryan, the director of strategy and international racing for the Jockey Club of Saudi Arabia, whether or not Scars Are Cool qualifies for the Saudi Cup may depend on what rating he gets from the local handicapper. The ratings for last week's races will be released mid-week. He also has the option of trying to qualify for the race in a Jan. 30 prep, the The Custodian of the Two Holy Mosques Cup.

Clark said that the horse's main selling point was his soundness.

“He was perfectly sound when we bought him,” he said. “That's what drew us to him. He didn't have a pimple on him. From the X-rays, you expect to see some wear and tear when they've raced for a little while, but there was no wear and tear on him at all.”

Clark said that the Saudis have been shopping at sales in Europe when looking for horses to compete in their major races.

“Traditionally, they have bought at Tattersalls in Newmarket and they have done well with those horses,” he said. “But they race on dirt primarily, so it's not surprising that they bought one here. Why wouldn't they want dirt horses?”