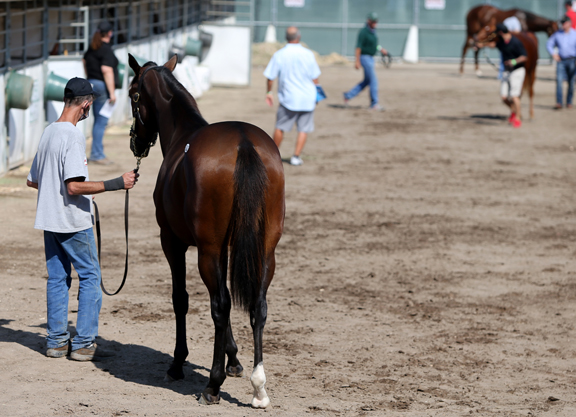 The Fasig-Tipton California Fall Yearlings Sale returns for its second renewal Monday, moving from its 2019 location in Pomona to Los Alamitos Race Course in Cypress for the one-day 2020 edition. The first of 298 catalogued yearlings is scheduled to go through the sales ring at 12 p.m. PT.

With a backdrop of continued uncertainty swirling around the global pandemic and its impact on the economy, consignors are approaching the one-day auction with caution.

“There is a whole lot up in the air, that’s all I can say,” said Tom Bachman, whose Fairview consignment will offer six yearlings Monday. “I think it’s going to be much like most sales where the top 15% will probably sell fairly well, but below that, it’s going to be a tough market.”

Bachman continued, “The real market right now in California is to find a Cal-bred who is perceived to be competitive in open racing, as well as Cal-bred company. If you have something like that, it will sell well. Now sell well may be 70% of what you thought it was going to pay a year ago. But that, in today’s world, is still a horse well-sold.”

Fairview consigned four of the six six-figure yearlings at last year’s California sale. Of the four, three were California-breds by Kentucky sires, including the $150,000 topper by Goldencents. This year, the Fairview consignment includes yearlings by Sky Mesa, Nyquist, Mastery, and Dialed In.

“I’m very happy with the six that I’m bringing down there,” Bachman said. “I have done quite well selling in California, but if there is a fly in the ointment on one of these things, you don’t know how that’s going to be perceived. I think most of the people who buy out here tend to be end-users, as opposed to pinhookers, so that lightens things up a little bit in the repository.”

Pinhookers were active at the auction in 2019, but Bachman fears, with the high number of buy-backs at the Kentucky sales in September, many were able to purchase yearlings post-sale last month and won’t be shopping as hard in California this year.

“There may be some pinhookers as well,” he said. “I have a Nyquist and a Mastery which are the kind of things that are nationally recognized as being in demand. So I think pinhookers will look at what I have. I think if you have a Kentucky-sired Cal-bred where those people perceive there is added value, I think you are ok, if you have a good individual. But it’s going to be tough sledding. If you have a California-sired individual, the pinhookers–last year they didn’t even have a 2-year-old sale out here–and with as many not-solds as there were in September, I can’t imagine the pinhookers don’t have all their slots filled.”

“I’d be lying if I didn’t say I’m worried,” Green said. “We watched Fasig and Keeneland and we watched Timonium. OBS was kind of up and down. I think the good horses will sell well. Our consignment has a lot of what I call the blue-collar guys, so we have nice horses who radiograph and scope, but they fall a little short of the big dogs. And I’m worried.”

Owners have only slowly been allowed back at racetracks to watch their horses and the current atmosphere may make them reticent to add to their stables, according to Green.

“My owners who actually race, they aren’t happy,” she said. “It’s not fun right now. They can’t go see their horses, they can barely go watch them run. The guys who are supporting the industry, the owners, aren’t having a lot of fun right now. I don’t know how many people are actually going to come to buy. I hope a lot.”

A potential bright spot at the sale could be the strength of the Cal-bred program.

“The Cal-bred program, with the Golden State stakes series and the maiden bonuses–the fact that the Cal-bred races are pretty much what is holding racing up on its feet right now–that plays in our favor,” Green said. “We are bringing the product and hoping that plays into the mindset of these trainers. To fill their quotas.”

She continued, “We have heard that a lot of trainers didn’t go to Kentucky because they want the Cal-breds and I cling to that hope because we have almost all Cal-breds in our consignment. They are nice, solid horses, but I am worried the cream will rise to the top and those horses will sell well, but there are only so many owners with so much money to go around. It’s a pretty good-sized catalogue, it’s a nice catalogue, but I worry that our middle and lower-end horses will not find homes.”

Due to crowd size limitations in the Los Angeles area, Fasig-Tipton was forced to relocate the auction from Pomona to Los Alamitos this year.

“We are in a parking lot, we are going to make a long trek down to the track and into the saddling paddock and sell horses with clients looking down from above. It’s not optimal at all,” Green said of the new locale. “It is what we had to do to make this happen. Unfortunately, it’s COVID. We are just ready for it to go away.”

Bachman said, “It’s a lot easier to get to Pomona than it is to get to Los Al from Santa Anita, I know that. It’s good that they stepped up and helped Fasig-Tipton so we could have the sale.  Otherwise we couldn’t have had one, which would really have been a problem. But at least we have a venue and Fasig is doing the best they can, I’m sure, trying to get business drummed up for the sale.”

Both consignors agreed the yearling sale is a pivotal next step in the California breeding industry’s calendar.

“The yearling sale is going to be a step off into a January mixed sale,” Green said. “This is a step off for people who are looking at their broodmares. If they can’t get fair market value for these yearlings, there is no incentive to breed these mares in 2021. So I think the sale is huge.”