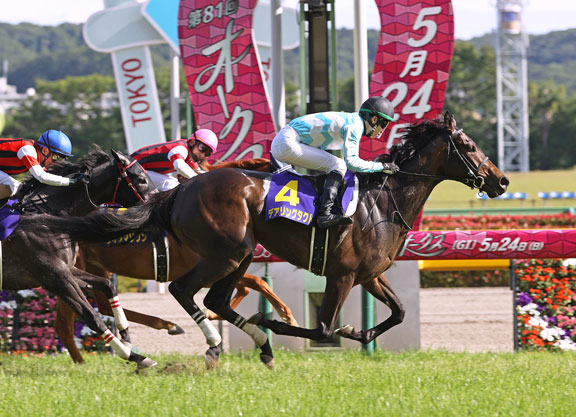 Sunday's G1 Shuka Sho will mark the first time since February that limited fans will be permitted to attend a Group 1 race in Japan, and it is fitting that it coincides with a fillies' Triple Crown bid by Daring Tact (Jpn) (Epiphaneia {Jpn}). Daring Tact is unbeaten in four runs including the G1 Oka Sho (Japanese 1000 Guineas) over a mile and the G1 Yushun Himba (Japanese Oaks) at 2400 metres. There is little that appears to be causing fear for connections-she recorded the fastest-ever final three furlongs in the Oka Sho, indicating that a drop back in trip to 2000 metres here shouldn't pose a problem. While fillies typically prepare for this race with a sharpener off a summer break, trainer Haruki Sugiyama said it is by design that Daring Tact is going straight to the Shuka Sho from the Yushun Himba.

Among those looking to thwart Daring Tact's bid for history is Ria Amelia (Jpn) (Deep Impact {Jpn}), Silk Racing's daughter of the American champion 2-year-old filly Ria Antonia (Rockport Harbor). Ria Amelia was herself a Group 3 winner at two and though she faltered when 10th over the yielding ground in the Oka Sho, she was a good fourth after a slow break in the Yushun Himba and put in a seamless prep when winning the G2 Sho Rose S. over this trip at Chukyo on Sept. 20. This will be her first time running at Kyoto but she broke her maiden at Hanshin, also a right-turning track.

The Yushun Himba second and third Win Marilyn (Jpn) (Screen Hero {Jpn}) and Win Mighty (Jpn) (Gold Ship {Jpn}) are back to re-oppose, as is Maltese Diosa (Jpn) (Kizuna {Jpn}), who was unplaced in both prior Classics but won a key prep for this, the G3 Shion S., over 2000 metres at Nakayama on Sept. 12.