Falmouth The Feature On Day Two 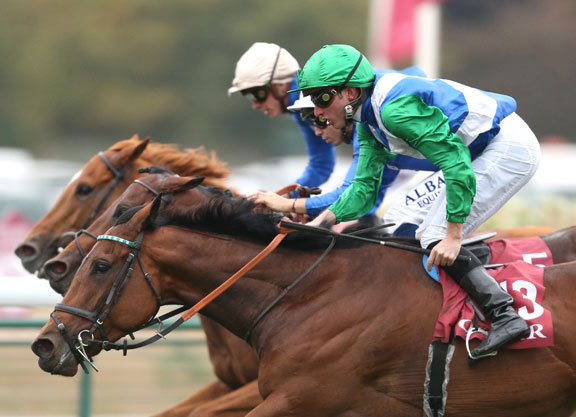 Friday’s action at Newmarket centres around the fillies and mares, with the G1 Tattersalls Falmouth S. the main attraction with a typically small but select field. Lael Stable’s One Master (GB) (Fastnet Rock {Aus}) tries a mile again after her fine effort when third in the June 18 G1 Queen Anne S. at Royal Ascot. Arriving with a strong run that looked like a winning one only to fade in the last 100 yards, the homebred who overcame a wide draw to capture the seven-furlong G1 Prix de la Foret at ParisLongchamp in October is almost certain to be played much later by James Doyle. Tactically, that could be a tricky task but stablemate Beshaayir (GB) (Iffraaj {GB}) blazed a trail when beating her in the G2 Ridgewood Pearl S. over this trip at The Curragh on May 25 and she could prove the vital pace factor again.

“She ran a marvellous race at Ascot and she’s in very good form,” trainer William Haggas said of One Master. “I wasn’t planning to run here, but there were so few entries. We’re not quite sure she got home at Ascot, so we will have to be careful but she’s in good form. I’m very happy with her.” Of Beshaayir, he added, “She’s done very well since the [Curragh] race. We’re very happy with her and this has always been on our radar since she won a Group 2.”

Ballydoyle’s I Can Fly (GB) (Fastnet Rock {Aus}) has yet to fire this term, but she showed what she is capable of when running Roaring Lion (Kitten’s Joy) to a neck when runner-up in the G1 Queen Elizabeth II S. at Ascot in October and gave the impression she was starting to click into gear. Second to Beshaayir in the Ridgewood Pearl, she was third behind another Haggas trainee in Move Swiftly (GB) (Farhh {GB}) in the G2 Duke of Cambridge S. at the Royal meeting last time June 19. ‘TDN Rising Star’ Veracious (GB) (Frankel {GB}) will have to settle better than she did when fourth there, while the Roger Varian-trained pair Qabala (Scat Daddy) and Mot Juste (Distorted Humor) represent the Classic generation receiving nine pounds from their elders.

Qabala, who had Mot Juste 1 3/4 lengths back in second in the G3 Nell Gwyn S. at Newmarket on Apr. 16, was well ahead of her when third in the G1 1000 Guineas at Newmarket on May 5, but only ninth in the Irish equivalent at The Curragh three weeks later and has been rested since. “I have to stick with what I said before Newmarket in that I didn’t think there was much between them,” Varian said of the 3-year-olds. “The Nell Gwyn showed there wasn’t much between them and the 1000 Guineas run didn’t reflect their true ability. I think Mot Juste is a better filly than her run in the 1000 Guineas. On race form, you would have to put Qabala ahead of Mot Juste but to watch and get to know them every day, there is not much between them.”

Of Qabala’s run in the Irish 1000 Guineas, he added, “I think that everything that could go wrong went wrong for her. She was slow away and got messed around early in the race. The race was dominated by being handy and the winner was a good filly that made all. We are looking forward to getting her back on track and she should be suited by conditions, hopefully. Even her third in the 1000 Guineas reads quite well I think in the context of this race, so we are looking forward to running her.”

In the G2 Duchess of Cambridge S., it is intriguing that Mark Johnston has opted to saddle the June 19 G2 Queen Mary S. winner Raffle Prize (Ire) (Slade Power {Ire}) under a three-pound penalty rather than take up the G2 Prix Robert Papin option. Second to the subsequent June 21 G3 Albany S. winner Daahyeh (GB) (Bated Breath {GB}) over this trip on the Rowley Mile here on May 18, Sheikh Hamdan bin Mohammed Al Maktoum’s homebred has made great strides subsequently and it is not inconceivable that she can give the weight away.

Charlie Johnston, assistant to father Mark, said, “I think it looks a deep renewal, certainly tougher than the colts’ equivalent [the July S.]. You’ve got a crossover between the Albany form and the Queen Mary form and it’s going to be a tough race. It’s a tough ask for our filly, especially with the penalty, but if we wanted to stay in this country there weren’t really any other options in the medium term, so we’ll let her take her chance.”

Roger Varian said of Daahyeh, “Later on in the year there is the Lowther, which is a speed test over six furlongs and she is in the Moyglare, a stiff test over seven. It was a big performance at Ascot and probably the first time she had been in a race, because she won comfortably first time up at Newmarket. She looked like she would get snagged inside the final furlong at Ascot, but she got a neck down and it was only then that the penny really dropped. She got in a race and won quite tidily on the line. I think the Duchess of Cambridge looks a strong race, but she is a good filly.”

Sheikh Nasser bin Hamad Al Khalifa’s Daahyeh is reopposed by the Albany runner-up Celtic Beauty (Ire) (No Nay Never), who is still a maiden despite two big efforts in pattern-race company. Godolphin’s TDN Rising Star duo Final Song (Ire) (Dark Angel {Ire}) and Divine Spirit (GB) (Kingman {GB}) reappear after the Royal meeting, with the former having fared better when finishing in the wake of Raffle Prize and Kimari (Munnings) when third in the Queen Mary. Divine Spirit was the greater inconvenienced by the slow ground there and has a chance to shine as she did on her five-furlong Windsor debut on May 20.