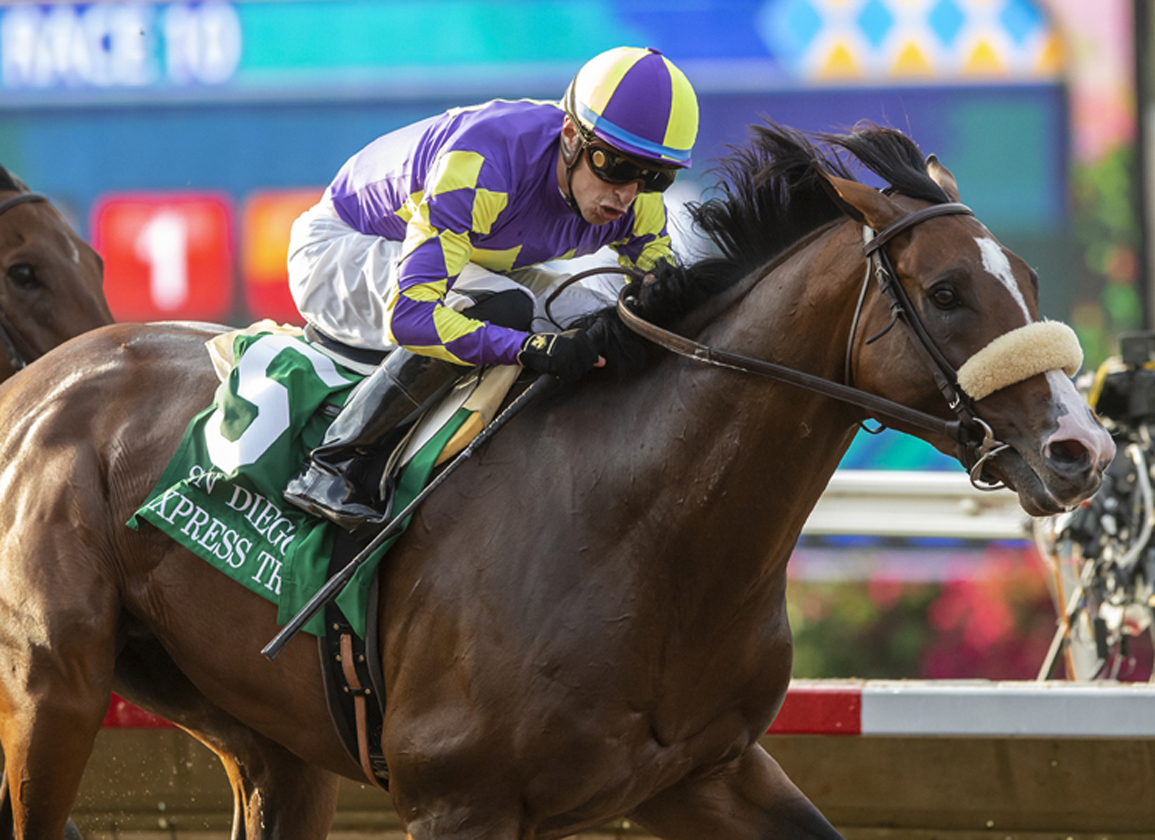 Express Train (Union Rags), slated to contest Saturday's GI Longines Breeders' Cup Classic, was scratched the morning of the race because of swelling in his hind right hock.

“He was schooling in the paddock three days ago and he got a little playful, jumping around and kicked himself,” trainer John Shirreffs said. “He'll be fine with a little more time and we plan on running him next year.”

“We had a little foot issue and changed the horse's shoes,” trainer Wesley Ward said. “It kept getting better, but we erred on the side of caution.”

“She was perfect [Saturday] morning,” he confirmed. “She jogged up perfect and is with [GII Juvenile Turf Sprint] third-place finisher Kaufymaker and fifth-place finisher and post-time favorite Averly Jane] on a plane [to Keeneland].”

L and N Racing LLC and Winchell Thoroughbreds LLC's Echo Zulu (Gun Runner), runaway winner of Friday's GI NetJets Breeders' Cup Juvenile Fillies, will get some time off before returning for a 3-year-old campaign, according to trainer Steve Asmussen.

“She needs a bit of a break now. So that she can fill in, she needs to grow,” he said. “She's not a big filly in stature, but as a Gun Runner, he was extremely talented, but he [later] developed into the best in the world.”

Earlier this season, the TDN Rising Star won the GI Spinaway S. and GI Frizette S. prior to her latest score.

Reflecting on Friday's victory, he added, “I think it's as simple as she's faster than they are. And, I think that's what she's been all year. She continues to be just extremely satisfying. When you look at a four-race year, three Grade Is and the style in which she's done it. All of her races are fast, her numbers are good. And, against the best company, that's as good as it gets. You catch the [GI] Alcibiades winner [JuJu's Map] and the [GIII] Pocahontas winner [Hidden Connection]. They made it here. And, she was better on the day. We're very proud of that.”

“He won't race again this year,” the Hall of Famer confirmed. “We don't have any specific plans for him.”

“All my horses came out of the race well,” Baffert said. “I thought his [Corniche's] race was very impressive. He's a really, really fast horse and this performance shows what a brilliant horse he is.”

“She ran very well and got a great ride,” said Clement. “She's a good filly. For me the biggest accomplishment of the whole deal–of course it's great to win the Breeders Cup–is that her owner/breeder Bobby Flay chose us with a filly that is very well bred and we were able to do this. It is very meaningful for me.”

Looking ahead, Clement added that New York's turf triple crown is a likely for next season.

“That would be the goal of the moment, but we have time to think about it,” he said.