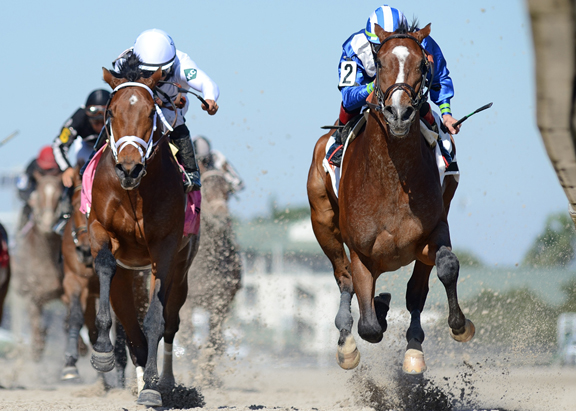 3rd-Gulfstream, $40,000, Msw, 1-9, 3yo, 6f, 1:11.92, ft, head.
LAMUTANAATTY (c, 3, Into Mischief–Gypsy Lou, by Elusive Quality) opened his account with a game maiden victory on debut at Gulfstream Saturday. The slight 5-2 favorite was off a tad slowly after brushing the gate from his inside draw as Dr. Duke (Ghostzapper) caught a flyer. The Shadwell colorbearer made up for it quickly, however, and was along to sit a pressing second off that one from the outside. Traveling smartly on the far turn, Lamutanaatty was in control of the race as they hit the quarter pole and began to brace for a fresh challenge from fellow firster Sainthood (Mshawish), who loomed the main danger while traveling three wide. Sainthood looked to be going the better of the two as they hit even terms in the stretch and even had the narrowest of advantages inside the furlong pole, but Lamutanaatty simply refused to lose and turned that one back from the fence to graduate by a hard-fought head. The $177,000 Fasig-Tipton November weanling turned $700,000 Keeneland September yearling is out of a winning daughter of MSW Win's Fair Lady (Dehere), a full-sister to MGSW/GISP Graeme Hall; and a half to GISW Harmony Lodge (Hennessy) and GSW Win McCool (Giant's Causeway). Lamutanaatty, who sold for $115,000 in utero at KEENOV in 2017, is bred on the same cross over Gone West-line mares as Into Mischief's Grade I winners Authentic and Mia Mischief. The winner's dam had a colt by Kantharos in 2020 and was bred back to Maximus Mischief. Sales history: $177,000 Wlg '18 FTKNOV; $700,000 Ylg '19 KEESEP. Lifetime Record: 1-1-0-0, $24,000. Click for the Equibase.com chart or VIDEO, sponsored by Fasig-Tipton.
O-Shadwell Stable; B-Haymarket Farm LLC (KY); T-Chad C. Brown.