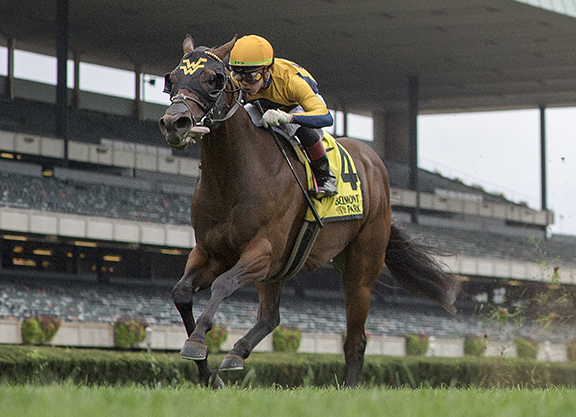 Four Wheel Drive, who graduated while making his racetrack debut in the Rosie’s S. at Colonial Downs Aug. 31, became American Pharoah’s second graded stakes winner Sunday when he coasted home to victory in the GIII Futurity S. at Belmont Park. The six-furlong race is a ‘Win and You’re In’ event for the GII Breeders’ Cup Juvenile Turf Sprint.

Sent off the 4-5 favorite, Four Wheel Drive broke sharply and was briefly on the lead before settling into second as the freewheeling Jack and Noah (Fr) (Bated Breath {GB}) stormed out to a clear lead and pulled his way through fractions of :21.62 and :44.33. Four Wheel Drive was poised to strike at the top of the lane, gradually wearing down the pacesetter to take the lead with a furlong to run and draw clear despite drifting out. Freewheeler closed for second, while Embolden just nipped Jack and Noah for third.

“Hopefully, he comes out of the race well,” said Hall. “It will be our first Breeders’ Cup starter. We had Shang Shang Shang last year, but she came up a little off the day of the race, so hopefully, this one makes the dream come true.”

Of Four Wheel Drive’s trip in the Futurity, Hall added, “The plan was for him to just sit chilly. Irad [Ortiz, Jr.] knew he had a lot of horse. He just made his move when he needed to.”

Four Wheel Drive pressed the pace before striding home a 3 1/4-length winner in the 5 1/2-furlong Rosie’s S. over the Colonial Downs turf course in his only previous trip to the post.

American Pharoah now has three stakes winners–all on turf. In addition to Four Wheel Drive, he has been represented by G3 Prix du Bois winner Maven, and Skidmore S. winner Another Miracle. The Triple Crown winner is also the sire of Group 1 placed Monarch of Egypt and Grade I placed American Theorem.

The late Olin Gentry signed the ticket on Funfair when the mare sold in foal to Scat Daddy for $350,000 at the 2016 Fasig-Tipton Kentucky February sale. Four Wheel Drive sold to Hartley/DeRenzo for $525,000 at the 2018 Fasig-Tipton Saratoga Sale before RNA’ing for $825,000 following a furlong work in :10 flat at this year’s Fasig-Tipton Gulfstream sale.

Four Wheel Drive is Funfair’s most recently reported foal. She was bred to American Pharoah this year.