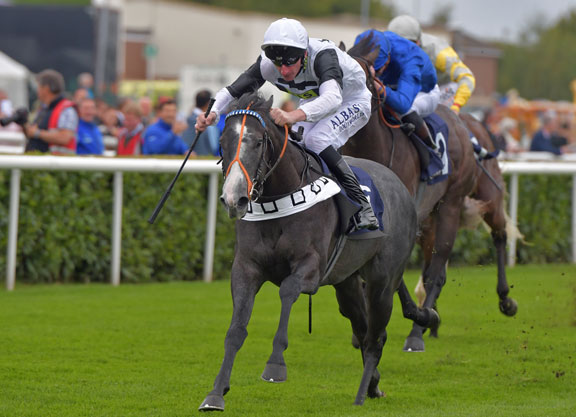 'TDN Rising Star' Elarqam (GB) (Frankel {GB}) is the main attraction on Thursday as Newmarket's Rowley Mile plays host to the G3 Tattersalls Somerville S. which is the centrepiece of the opener to the Cambridgeshire meeting. By a pair of Guineas winners, being out of Attraction (GB) (Efisio {GB}), Sheikh Hamdan bin Rashid Al Maktoum's 1.6million guineas Tattersalls October graduate scored with considerable authority over this trip on debut at York Sept. 10 and at this stage rates as one of the season's most intriguing juveniles. “Obviously we were very pleased with what we saw at York and Mark [Johnston] feels he has stepped up,” commented the owner's racing manager Angus Gold. “A nice, galloping track should suit him and while you can't justify such a big price-tag in a maiden, it was nice to see he possesses a decent level of ability. Mark has always liked him, but it was obvious fairly early he wasn't going to be a six-furlong horse and we think he'll stay further. At York, Dane [O'Neill] said he only hit top gear in the final furlong and he couldn't pull him up. His trainer and breeder say he resembles his mother, who wasn't really a looker, but for a Frankel he appears to have a very good mind, by all accounts. We're looking forward to seeing him in action again and hope he can take the next step up.”

Two other once-raced maiden winners are Al Shaqab Racing's Fajjaj (Ire) (Dawn Approach {Ire}) and Godolphin's Morlock (Ire) (Epaulette {Aus}), with the former scoring at Ascot Sept. 9 and the latter getting off the mark at Kempton Sept. 8. Fajjaj is held in high regard by connections and Al Shaqab's racing manager Harry Herbert said, “He's a very nice horse, a magnificent looker. It was a lovely debut at Ascot and he was ridden very well to win given how green he was. Physically and mentally he should have sharpened up since then and he's been working well enough since for Hugo [Palmer] to want to run him in a Group 3. He warrants the appearance and deserves the opportunity. When they do what he did on debut it is all positive and they can only get better.” Charlie Appleby said of Morlock, “I was pleased with Morlock on his debut, when he did everything very professionally, and the form of that race looks to have worked out quite well so far. This is his next step, but he looks to have come forward for his first run and hopefully he will be competitive.”

Anne Cowley's Tip Two Win (GB) (Dark Angel {Ire}) comes here on the back of a success in the Listed Flying Scotsman S. at Doncaster last time Sept. 15 and that was a smart performance on his first try at this trip. “I was nervous that this would come a bit too soon after Tip Two Win's Doncaster victory, but he is so well at the moment that it has encouraged me to run him again,” trainer Roger Teal said. “I had not expected him to romp home by two lengths in the Flying Scotsman, but the race went smoothly and once Adam [Kirby] switched him he quickly put it to bed. What really struck me was when it looked like the others were going to come to him near the finish he picked up again. The step up to seven furlongs seemed to benefit him as he takes a bit of time to get into top gear–he's got a lovely big stride and wants to use it.”