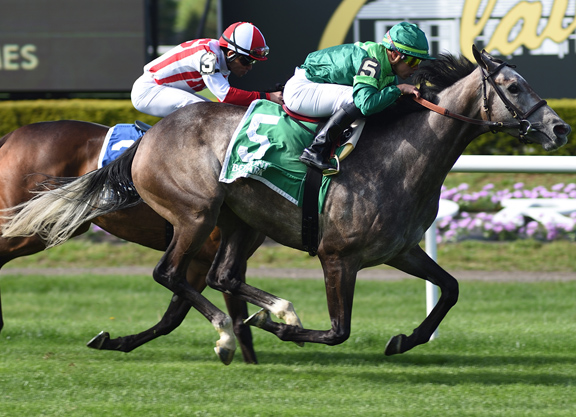 Homerique fell out of the stalls and settled ahead of only Andina del Sur (Giant's Causeway) through the opening exchanges as Chipolata (Fr) (Muhtathir {GB}) led them along in splits that more resembled a Standardbred race than a Thoroughbred. Though there was no marked increase in the tempo for the next couple of furlongs–the half was up in :52.86–Irad Ortiz, Jr. was content to mark time at the rear, in the slipstream of GI American Oaks-winning stablemate Competionofideas (Speightstown) before edging a bit closer on the turn. Waited with until heads were turned for home, Homerique was angled out for clear running three-sixteenths out and proved a cozy winner in the finish. Competitionofideas was beaten by a better horse on the day and completed the exacta ahead of the pacesetter in third.

Previously trained by Francis-Henri Graffard for Ecurie De Montlahuc, Homerique parlayed an eight-length victory over soft Chantilly turf last April into a runner-up effort in the G3 Prix Penelope the following month and a neck third in the G1 Prix de Diane (French Oaks) in June. A first group tally in the G3 Prix de Psyche had owner Steve Burggraf thinking about the 12-furlongs of the G1 Prix de l'Arc de Triomphe, but the filly–only seventh in the G1 Prix du Moulin at ParisLongchamp in September–insrtead took on her peers in the G1 Prix de l'Opera on Arc weekend and finished a good third. The strength of that effort was validated when Wild Illusion (GB) (Dubawi {Ire}) and Magic Wand (Ire) (Galileo {Ire}) returned to finish second and fourth, respectively, in the GI Breeders' Cup Filly & Mare Turf.

According to winning owner Peter Brant, Homerique will be pointed for the 10-furlong $600,000 GII New York S. on Belmont eve June 7.

One of 93 black-type winners and 42 group/graded winners for the late Exchange Rate, Arqana May Breeze-Up grad Homerique, is out of a half-sister to Exchange Rate's G3 UAE Oaks third Music Chart. Stakes-winning and Grade III-placed third dam Desert Gold is the dam of Group 1-winning juvenile filly White Moonstone (Dynaformer) and SW & GSP Albasharah (Arch). Homerique's 2-year-old Temple City half-sister was an €130,000 purchase out of last year's Arqana August yearling sale and her yearling relation is a colt by Fast Company (Ire).