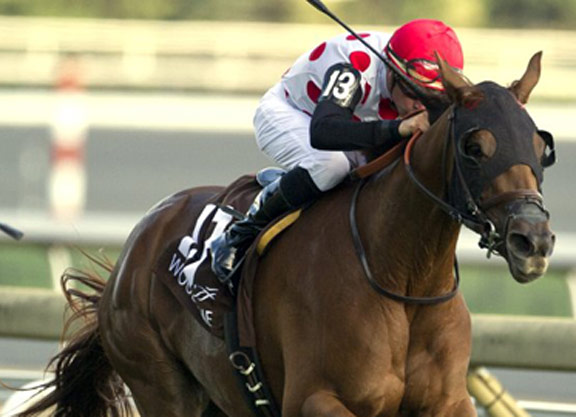 One day after champion Tepin (Bernstein)'s victory in the GI Ricoh Woodbine Mile, Live Oak Plantation homebred Victory to Victory (Exchange Rate) capped off a stellar weekend at Woodbine for Canadian Hall of Famer Mark Casse Sunday by breaking her maiden in the newly-upgraded GI Natalma S. under Florent Geroux. Casse and Geroux teamed up to win last year's renewal of this event with Catch a Glimpse (City Zip), who won the GI Breeders' Cup Juvenile Fillies Turf next out and was named Canadian Horse of the Year. Adding blinkers for this “Win and You're In” event for that Breeders' Cup test, Victory to Victory, who was one of four Casse runners in this test, broke sharply from post 13 in this 14-horse affair and settled to track from a dual fourth as headstrong longshot Will She (Wando) ticked off sharp opening splits of :22.69 and :45.37. Ranging up about six wide turning for home, the chestnut stuck her nose in front halfway down the lane, kept on finding to put away Stormy Perfection in the final furlong and rolled clear to earn her diploma in style.

“I think the blinkers made a big difference today,” said assistant trainer Norm Casse, who saddled both Tepin and Victory to Victory for his father after plane trouble caused him to miss his trip from the Keeneland September Sale in Lexington to Woodbine. “We knew she was a very talented horse, and she's finally starting to figure things out.”

“She broke very sharply from the gate,” said Geroux. “From there we got a nice position, without taking any bumping or anything. Turning for home she gave me a very nice kick.”

Rallying to be fifth after a trouble trip when unveiled in a Saratoga turf sprint Aug. 12, Victory to Victory split the reopposing Tapa Tapa Tapa (Tapit) and Stormy Perfection when second next out in a seven-panel allowance over this course Aug. 27.

Charlotte Weber's Live Oak Plantation purchased the winner's dam Points of Grace for just $170,000 as a yearling at the Fasig-Tipton August sale and she went on to win the 2009 GII Dance Smartly S., that year's Sovereign Award as the country's best grass mare and over a half-million dollars. Victory to Victory is the mare's third and most recent foal. Points of Grace was sold for just $30,000 at last year's Keeneland November sale after failing to get in foal to Into Mischief and she was most recently bred to Amira's Prince (Ire). Victory to Victory also hails from the family of Group 1 winner Favourable Terms (GB) (Selkirk).