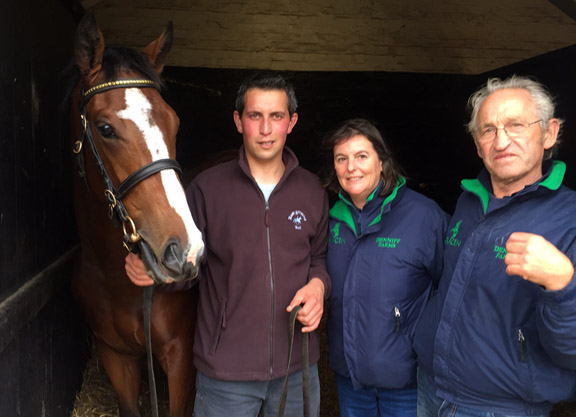 Tattersalls has a habit of breaking its own records with frequency and that was the case again on Tuesday when Fiona and Mick Denniff's daughter of Exceed And Excel (Aus) became the most expensive filly ever to sell at Book 2, reaching 500,000gns.

Offered as lot 927 through Rosyground Stud, the smart bay filly is a half-sister to Beat The Bank (GB) (Paco Boy {Ire}), who has won his last three races, progressing from the Listed Sir Henry Cecil S. to the G3 Thoroughbred S. and, less than a fortnight ago, the G2 Shadwell Joel S.

Beat The Bank is owned by Vichai Srivaddhanaprabha's King Power Racing Co Ltd, which has been spending consistently large sums in Britain and Ireland over the last few months through Alastair Donald. Though the filly was knocked down to agent Richard Brown in the ring, with David Redvers as underbidder and Donald watching the proceedings from the opposite side of the ring, she was later marked as sold to SackvilleDonald.

“Wow,” was the only word Fiona Denniff could muster on exiting the ring to congratulations from her colleagues.

When coaxed, she added, “Even before Beat The Bank started doing his thing I've loved this filly right from the start as she's always been such a star. I bred her dam Tiana and sold her as a yearling [to Darley], then bought her back the second time she was offered for sale as a broodmare as I couldn't afford her the first time.”

The 35,000gns spent on returning the six-furlong winner to Denniff Farms in Nottinghamshire transpires to have been money well spent as not only has Tiana produced Beat The Bank but also the dual winner Salt Island (GB), who is a full-brother to the yearling and was fourth in the 2015 G1 Commonwealth Cup at Royal Ascot. The mare's filly foal by Showcasing (GB) will be offered at the December Sales, also through Rosyground, and she is in foal to Muhaarar (GB).

“We've been consigning through Rosyground for three years now and they do all our foalings for us, too,” added Denniff. “Adam Hill does a great job and I'm delighted for them as well.”

SackvilleDonald's buying spree continued with lot 972, Kenilworth House Stud's Lope De Vega (Ire) colt out of What A Picture (Fr) (Peintre Celebre). The half-brother to three black-type performers cost 320,000gns and is one of 19 Book 2 purchases for the agency.

Canny Reinvestment Pays Off
Tom Goff took a keen interest as lot 969 from Yeomanstown Stud entered the ring and, standing alongside MV Magnier, he outbid Hubie de Burgh to claim the David O'Callaghan-bred daughter of Dark Angel (Ire) for 400,000gns.

The breeder has been familiar with the filly's dam Warshah (Ire) (Shamardal) since her weanling days, having pinhooked the half-sister to G1 Prix de l'Opera winner Kinnaird (Ire) (Dr Devious {Ire}) as a foal for 30,000gns and sold her on to Shadwell the following year for 90,000gns.

“I bought her back [unraced] at the July Sale and then the very next day her half-brother Mickdaam (Ire) won his maiden,” recalled O'Callaghan. “The pedigree has just developed since, and Berkshire and all those out of Kinnaird have jumped into the page. It was a lucky day when we bought her back.”

“The dream is that she will make up into a Queen Mary filly,” was the verdict of Tom Goff.

Another Star For Marlhill
The leading colt of the day was provided by Marlhill House Stud, which a fortnight earlier had sold the top lot at Goffs for €1.6 million. That was for a son of Frankel (GB) and it was another stallion son of Galileo (Ire), the dual Derby winner and freshman sire Australia (GB) who gave the Tipperary stud another nice touch with a homebred at Tattersalls.

John and Jake Warren saw off Charlie Gordon-Watson and Bruce Rayond for lot 918, going to 380,000gns for the son of the Listed-winning Oasis Dream (GB) mare Thai Haku (Ire) from the further family of stallions Hernando (Fr) and Johann Quatz (Fr).

“He is a wonderful individual, an absolute belter, out of stakes-winning mare and from a top farm,” said Jake Warren, who bought him for an unnamed European syndicate. “We're big fans of the stallion and have bought a number by him already this year.”

“We've had three lovely colts by him this year and we've done very well,” said McConnon. “He's a homebred and is a big, scopey colt who has always been a great mover.”

The farm has another colt foal by Australia from the mare and she is in foal to Lope De Vega (Ire).

Godolphin Keep Spending
A sextet of yearlings was added to Sheikh Mohammmed's string on Tuesday, led by lot 949, the most expensive son of Zebedee ever offered at public auction at 330,000gns. The Croom House Stud homebred is a half-brother to three multiple winners out of a Listed-placed half-sister to New Zealand Group 1 winner Steinbeck (Ire) (Footstepsinthesand {GB}).

Two colts by stallions at opposing ends of the distance spectrum were each purchased for 300,000gns. The first, lot 801, is a son of Kodiac (GB) out of a sister to dual Group winner Norse Dancer (Ire) (Halling) who was pinhooked by Franny and Niamh Woods of Rathbarry Stud for €110,000 at Goffs.

He was later joined by lot 866, a colt who continued the good sales run of his first-season sire Sea The Moon (Ger) when offered by breeder Michael Swinburn through his Genesis Green Stud. Swinburn bought the colt's twice-raced dam (Soviet Terms (GB) (Soviet Star) for just 5,000gns and the partially blind mare, a half-sister to champion juvenile filly Best Terms (GB) (Exceed And Excel {Aus}) had been good to him, breeding four winners from four runners.

“We've been sending her to some commercial, speedy coverings, but we looked again at the pedigree and thought we'd take a different route,” explained Swinburn of his decision to use Lanwades' German Derby winner. “This colt has always been lovely but had a small issue which stopped him coming here as a foal.”

Towards the end of the session, Anthony Stroud went to 230,000gns for an Iffraaj (GB) filly out of a sister to the late Group 1 winner Aqlaam (GB) (Oasis Dream {GB}) from Kirsten Rausing's Staffordstown (lot 1033).

Shadwell Not To Be Outdone
While Godolphin has already spent 1.7 million gns on seven Book 2 purchases, Angus Gold of Shadwell has been bidding even more frequently. Twenty-nine yearlings have been bought through the first two sessions of Book 2 for 3,460,000gns, the priciest of which was another good pinhooking result from the shrewd foal judges at Corduff Stud. The Egan family gave 82,000gns for lot 973 as a foal and they were handsomely rewarded when the Tamayuz half-brother to Listed winner Pas De Soucis (Ire) (Footstepsinthesand {GB}) returned to sell for 325,000gns. The colt, bred by Brendan and Anne Marie Hayes of Knocktoran Stud with Ballantines Racing Stud, is the second foal of Whip And Win (Fr) (Whipper), who lived up to half of her name at least when landing the Listed Prix Isonomy for Robert Collet.

Select Purchase By Juddmonte
Juddmonte Farms is a less frequently seen name on the buyers' sheet at yearling sales but Prince Khalid's operation did buy a Charm Spirit (Ire) colt for 130,000gns from Book 1 and have so far made two Book 2 purchases. On Tuesday, Lord Grimthorpe went to 230,000gns to buy a Lope De Vega filly (lot 817) from Stauffenberg Bloodstock.

The daughter of the Cheshire Oaks winner Sail (Ire) (Sadler's Wells) was offered by the leading German consignor for her breeders Heike Bischoff and Niko Lafrentz of Gestut Gorlsdorf. The mare was bought from Ecurie des Monceaux for €92,000 at the Arqana December Sale when carrying this filly and she was covered this year by the couple's homebred stallion Sea The Moon.

Magnier Is All Charm
MV Magnier has signed for two yearlings on Coolmore's behalf during Book 2, one of which is a colt by the first-crop Tweenhills stallion Charm Spirit (Ire).

Lot 919, offered by Grove Stud and bought for 210,000gns, was a 110,000gns pinhook by Brendan Holland. Bred by Tim Cooper at Nuthurst Farm Stud, he is a half-brother to the dual winner and Listed-placed juvenile Morning Post (GB) (Acclamation {GB}) and the multiple winners by Showcasing (GB), Munfarrid (GB) and Always Thankful (GB).

It will not have escaped Magnier's notice that the mare's current 2-year-old Fridtjof Nansen (GB) (Kyllachy {GB}) made a decent debut when a fast-finishing fourth in the Curragh maiden won by TDN Rising Star and subsequent G2 Beresford S. winner Saxon Warrior (Jpn) (Deep Impact {Jpn}).

Magnier was also involved in a partnership purchase with Peter and Ross Doyle of lot 886. The son of another freshman, Slade Power (Ire), continued the good day for Rathbarry Stud when selling for 200,000gns. Bred by Chasemore Farm, he is the first foal of the Sixties Icon (GB) mare Summer In February (GB), a half-sister to the G2 Lennox S. winner Dutch Connection (GB) (Dutch Art {GB}).

Ten yearlings by the young Darley sire have now changed hands in Book 2 for an average of 109,000gns.

Yes To No
Lot 830 became the latest high-priced son of No Nay Never, another of this season's first-season sires who was very popular last week during Book 1.

The Camas Park Stud colt was bought for 200,000gns by Charlie Gordon-Watson and brings his sire's Book 2 average to 118,000gns for four sold. The son of the stakes-placed Exceed And Excel (Aus) mare Seeking Solace (GB) was bred in partnership by Camas Park, Lynch Bages and Summerhill.