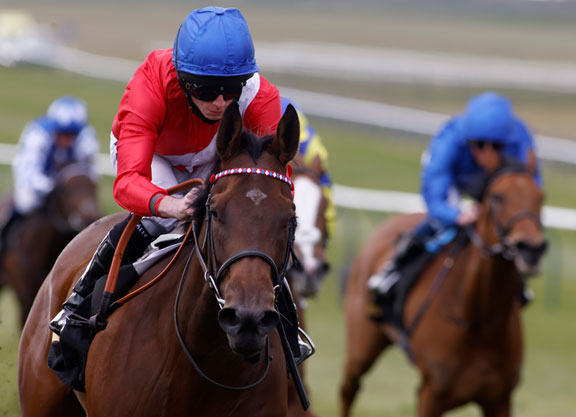 One of the most exposed of the fillies gathered for Wednesday's G3 Lanwades Stud Nell Gwyn S. at Newmarket, Cheveley Park Stud's Sacred (GB) (Exceed and Excel {Aus}) was nevertheless totally unexposed at this seven-furlong trip and showed more than adequate stamina combined with decisive speed to prevail. Switched off towards the rear by Ryan Moore, the 6-1 shot was delivered up the far rail passing halfway by Ryan Moore but needed a gap heading down into the “dip”. Slicing between rivals as soon as the chance appeared, the homebred who was runner-up in three group 2s last term cut down Saffron Beach (Ire) (New Bay {GB}) with a furlong remaining en route to a 3/4-of-a-length success, with the 11-4 favourite Love Is You (Ire) (Kingman {GB}) 1 1/2 lengths away in third. “Her work has been very slick this spring and I think the ground is important to her, quick ground is a must,” trainer William Haggas said. “She got the trip well and if the ground is fast, we'll be coming back here on Guineas day. It's a bit of a no-brainer for me.”

It has been a tumultuous period for the Stud, with the news that David and Patricia Thompson had been awarded CBEs in the Queen's Birthday Honours List in October preceding that of David's passing in January. While the operation has dabbled successfully with jump racing and unearthed some leading talent in that sphere, there is nothing that better epitomises their ethos than success at the local track with a homebred filly in a prestigious flat race. Sacred was campaigned over five and six furlongs at two, winning here on debut in June before playing bridesmaid in the G2 Queen Mary S. at Royal Ascot, G2 Lowther S. at York and G2 Flying Childers S. at Doncaster. Out of sorts when last of eight in the G1 Cheveley Park S. back at this venue in late September, she was worth a try at this distance given that she is out of a half to Lady Eli (Divine Park) and Haggas has been adamant she was more than just a fast juvenile.

“She got beat in three group twos last year, which was frustrating, before she went off the boil but I've always maintained she'd stay and she's proved that today,” the master of Somerville Lodge commented. “She's got a nice turn of speed and she picked up really well. Ryan said seven is her trip, but there's only one Guineas a year and she can always drop back down later. I don't think she does much in front either, so if you're brave you can wait longer. He gave her a lovely ride and I thought she won nicely.” Saffron Beach will meet the winner again in the May 2 G1 1000 Guineas and trainer Jane Chapple-Hyam said, “I thought she ran well–I was really pleased, Adam [Kirby] was happy with her and she ran right through the line. She had a good blow, which we knew she would because she's 85-90 per cent fit, so we'll look forward to the Guineas now. She looked to me as if she's ready for a mile now, comfortably. She was coming back at the line.”

Sacred's dam Sacre Caroline (Blame) was a shrewd 300,000gns purchase by the Stud at the 2017 Tattersalls December Mares Sale and the half-sister to the five-times grade I-winning champion turf female Lady Eli and to the GIII Regret S. and GIII Mint Julep H. winner Bizzy Caroline (Afleet Alex) has provided instant reward with this first foal. Not that Lady Eli is the only top-level performer in the family, with the likes of Sweet Loretta (Tapit), Spiced Perfection (Smiling Tiger), Spring in the Air (Spring at Last), Palace Episode (Machiavellian), Laughing Lashes (Mr. Greeley), Pays to Dream (High Yield) and The Last Zip (City Zip) all under the third dam Kazadancoa (Fr) (Green Dancer). Next up from the dam is the 2-year-old filly Enshrine (GB) (Ulysses {Ire}), while she also has a 2020 colt by that sire.