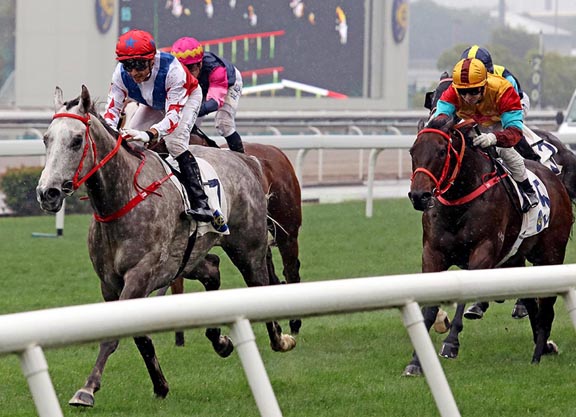 Drawn stands' side, Big Party sat a good trip behind the early pace set by Premiere (NZ) (Dylan Thomas {Ire}), was switched out into the three path and struck the front with a half-furlong to race before striding home a comfortable winner.

Big Party may have earned a shot at Hong Kong's best sprinters in the G1 Centenary Sprint Cup in three weeks' time, but winning trainer Frankie Lor wasn't fully committing to that just yet.

“I need to look at the horse tomorrow morning to see how he is,” the conditioner told HKJC's David Morgan. “After his last run he came back and was eating okay and everything looked good, so I talked to Joao (Moreira) and we decided to race him [Sunday]. It's three weeks to the Group 1 so we need to see how the horse is tomorrow and then we can start to think.”

Big Party is the 165th worldwide black-type winner and 84th group/graded winner for his outstanding sire and is out of an unraced full-sister to SW & GSP Super Groove (Aus) as well as a half to MGSW and G1 The Galaxy S. runner-up Taikun (Aus) (Anabaa). Also the 109th SW and 44th GSW out of a daughter of Dehere, Big Party has a yearling full-brother that is to be consigned by Bhima Thoroughbreds to the upcoming Magic Millions Gold Coast Yearling Sale. De Groove produced another Exceed and Excel colt this year and was bred back to Zoustar (Aus).